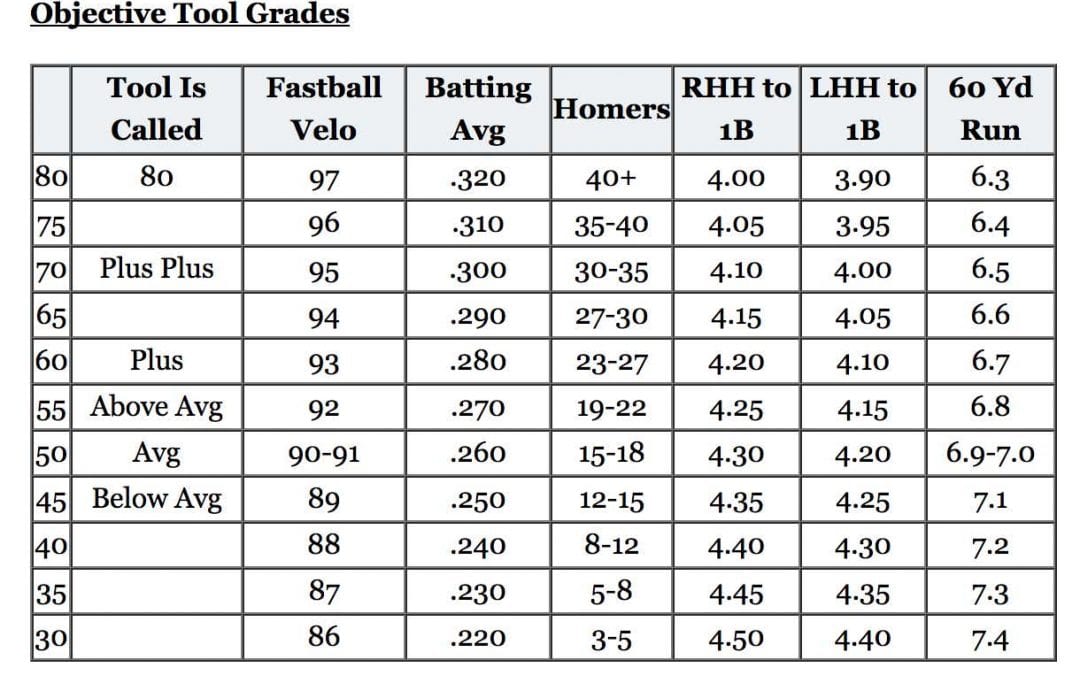 Hello Birdland! I’ve been thinking long and hard about how to best contribute to BSL and I’ve decided that the best way to do that is to draw on my personal experience as a scout and Front Office Executive. The pieces I’ve enjoyed the most as a fan were always “inside baseball”(bad pun), so I’ve resolved to start there and see where this whole writing thing goes. I’m looking forward to shining a little light on how Major League Clubs work, specifically in the scouting realm & the international market. This first article will focus on the basics of scouting position players and I will follow up with one focusing on pitchers.

First, a little about me. I got my first opportunity to work for a Major League Baseball Club with the Atlanta Braves, living and working out of their Dominican Republic academy in San Pedro de Macorís. I continued to work for the Braves for a few years, before landing a position with the O’s in 2012. I eventually worked my way up to Assistant Director of Minor League & International Operations, contributing everywhere from Minor League Operations/Player Development to Professional Scouting. My primary focus, however, was in International Scouting. I was eventually given the opportunity to oversee amateur signings in Latin America. I was fortunate enough to learn from some great scouts along the way: Fred Ferreira, Joe McIlvaine, Johnny Almaraz, and my favorite boss, Dan Duquette to name a few.

Enough about me. Let’s talk about scouting – amateur scouting to be exact, and what to look for when considering signing a player. I’ll walk you trough the process of writing a scouting report. There are some obvious differences between amateur and professional scouting, the biggest being that professional players have a much longer track record with which to inform a scout’s ultimate opinion. Obviously, there’s very little performance record to go by when first looking at a 15 year old Dominican or Venezuelan kid, so the thing you’re looking for first and foremost is athleticism. Pure athleticism is something you can’t teach – it’s irreplaceable in a Big League prospect. When describing a young prospect’s athleticism, you start by talking about the player’s body type.”High waist”, “long limbs”, and a “good frame that will allow for added strength” are phrases that you’ll often use when describing a position player prospect that you want to sign. I often used body type comparisons (“comps”) inside and even outside of baseball. For example, a good center field prospect often has the body of a young NFL wide receiver. Add in good balance and coordination, and you’re looking at the building blocks of a solid signing.

The heart of a scouting report are the “present” and “future”grades of a player’s “tools.” Most readers will be familiar with the term “five tool player”, which is the gold standard that any scout is looking for. For reference, the five tools are “Hit”, “Power”, “Arm Strength”, “Fielding”, and “Running Speed”. You want a position player prospect to have the potential for Major League average quality (or better) in as many of these tools as possible. A “five tool player” has the potential for at least Major League quality in all five of these tools. Player workouts are designed to showcase these tools. In a later piece, I’ll describe in more detail exactly how these workouts operate in Latin America, but for now, you just need to know that at each workout, scouts get the opportunity to see players showcase all five tools.

Tools are graded using a 20 to 80 scale, which represents a bell curve of Major League talent, with 20 being an amateur player, 50 being Major League average, and 80 being perennial All-Star. Each player is given a “present” and “future” grade in each of the five tools to give a full picture of who they are now, and what they project to be in their prime.

Let’s start by talking about one of the most important skills – batting, which is described by in a scouting report using the “hit” and “power” tools. When grading the “hit” tool, you want to describe how well and how often a player makes solid contact. Does he hit line drives consistently? Can he hit the ball to all fields? Does he make solid contact on breaking balls? Does he get good plate coverage? Does he have the ability to recognize pitch types? When describing power, you want do discuss it in terms of “raw” and “game” power. For raw power, does he have the ability to hit the ball a long way? For game power, will his raw power translate over to his ability to use it in game? A scout’s final report on a player will succinctly describe a player’s abilities in both of these batting categories in terms of present (right now) and future (in his prime potential) abilities. Most young Latin American prospects will be around a 20 at present in the hit tool, and a potentially a 30 or 40 in power due to their raw power (but not their to-be-developed game power) abilities. When it comes to future grades, however, you obviously want a player that projects to have 50 or greater future grade in at least one of the two batting categories.

Next, we’ll talk about throwing & running. Young players are often much closer to reaching their potential in these three than they are at hitting. Hitting takes time to learn, as does fielding are much more often God-given skills that are already close to being what they will be at their best. When describing running speed, you’re simply describing how fast a player runs. Arm strength is similar. How fast does the ball get from point A to point B? Does the throw have “carry” – does it arrive at point B losing steam or does it look like it would keep going on a line through where it was caught? How quick is his release? Running speeds are judged simply using a stopwatch – both in a 60 yard dash and from the batter’s box to first base – with a chart that corresponds speeds to the 20 to 80 scale. In my opinion, home-to-first speeds are more useful in gauging a player’s usable game speed than the antiquated 60 yard dash since you rarely see a player run a full 60 yards in a game.

The last tool to discuss is fielding. Fielding is often somewhere in between batting and running/throwing in terms of being close to ultimate potential for a young prospect. Fielding is graded by watching a prospect handle grounders, fly balls, or blocking balls. Players are graded on their ability to get to and to handle balls smoothly. How quick is his reaction time? Does he go in a straight line to where he needs to be, or is there some correction needed en route? How well do his feet and hands work in unison? How smoothly does he pick up the ball and get in a position to throw?

The last component of a scouting report I’ll discuss is “makeup”, or a player’s overall intelligence and mentality. This can be a controversial topic for many in the scouting world in terms of importance, but I’ve personally found it to be very important in determining future Major League potential. I was told by a very successful, seasoned scout that I trust very much that the “three qualities that will propel a prospect to success are self confidence, emotional control and mental toughness.” It means a lot when a young player comes up to you in a tryout, gives you a firm handshake, and looks you in the eye.

I hope this has been an insightful look at how Major League talent scouts approach evaluations of young players. My next piece will focus on what to look for in a pitching prospect. I’m new to this writing thing, so suggestions and questions are more than welcome. I hope to see some of you on the message board and will do my best to respond to your feedback there.

Cale Cox is a graduate of Texas State University & Texas A&M University. He has held roles in Scouting, Player Development, & International Operations for the Atlanta Braves & Baltimore Orioles. He lives in Columbia, Maryland with his wife & daughter.