Seattle’s Prospects If Wilson Is Less Than Perfect? 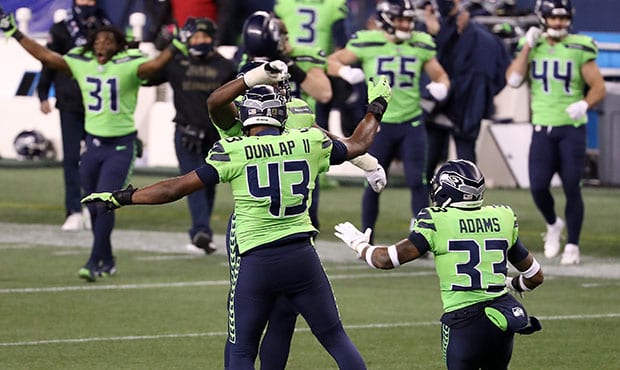 Can the Seahawks make the playoffs if Russell Wilson plays less than perfect?

A few weeks ago, Russell Wilson was the NFL’s leading MVP contender. The Seahawks, despite having one of the worst defenses in the league, were 6-1 and in first place in the NFC West. Wilson, in the midst of a spectacular career, was playing some of his best football.

But there was a question that surrounded Seattle. Could Wilson play at such a high level for all 16 games? Would he have to nail down his first MVP trophy just so the Seahawks could make a run in the postseason? Could Wilson and his exploits on offense overcome a defense that had been transformed from the Legion of Boom into playing like the Legion of Doom, a team that was dead last in yards given up and fifth-worst in points allowed heading into Week 11?

It wasn’t just a matter of Letting Russ Cook. It was a matter of him acting as the maître d’, the server, the cook, the food-runner, the bartender and the busboy just so Seattle could grab another win.

On Thursday night, though, he got plenty of help from his teammates as the Seahawks held off the Cardinals 28-21. Wilson didn’t have to be the superstar to move Seattle back into the top spot in the division. Instead, the running game contributed. The defense was better than expected. And yeah, Wilson made one MVP-like play that helped his team snap a stretch of three losses in four games.

Entering the contest on Thursday, Wilson hadn’t been doing much lately but burning the food he was preparing. He had thrown seven interceptions in his past four games—only the second time in his career that he’d tossed that many picks in a four-game span—and the storyline of the week was that Wilson had to cut down on his miscues. In the Seahawks 23-16 loss to the Rams last week, Wilson made mistake after mistake. He threw an interception in the end zone when he should have just run for the first down. He was sacked a half-dozen times. He lost a fumble. He was not good.

“You may slip and fall a little bit,” Wilson said this week. “You’ve got to just keep climbing. I think Vince Lombardi said something about that one time. I think he talked about the man who’s on top of the mountain didn’t just get there. It’s so true I think that as a team, there’s always challenges … The guys that can keep getting up and keep swinging, those are the players and those are the teams that keep overcoming.

“What I do know about myself is I’m an over-comer. I’ve been doubted before. One thing about me is I’m going to keep swinging.”

That’s what he did after the first play of Thursday’s game. On his first snap, Wilson was sacked by Arizona defensive end Angelo Blackson. A few plays later, on third-and-four, Wilson found himself under attack again. But he avoided getting tackled, moved to his left, and found Tyler Lockett for a gain of five yards.

A few minutes later, Wilson made the spectacular play we’ve come to expect.

After faking a handoff to Bo Scarbrough, Wilson searched downfield for a few seconds, couldn’t find anybody, avoided the sack attempt from Haason Reddick, took off toward the line of scrimmage, and just as Markus Golden was about to catch him and trip him up, Wilson threw a perfect touchdown strike to DK Metcalf streaking toward the corner of the end zone.

For Wilson, who finished 23 of 28 for 197 yards and two touchdowns, it was perhaps the only MVP-like play he made all game.

And it was much desired. Seattle needed to beat Arizona on Thursday. After losing to the Cardinals in Week 6, the Seahawks couldn’t afford to fall behind Arizona in the NFC West standings AND lose out on the tiebreaker by virtue of getting swept for the season.

On Thursday, Wilson didn’t have to run the entire restaurant by himself. The running game, which was missing starter Chris Carson for the third-straight game with a foot sprain, got good production from Carlos Hyde, who was making his first appearance in three games and who finished with a season-high 79 yards. Scarbrough added 31 rushing yards. The defense allowed a season-low 21 points, the secondary broke up potential game-tying touchdown passes to Larry Fitzgerald and Andy Isabella on Arizona’s final drive of the game, and defensive end Carlos Dunlap ended the game by sacking Kyler Murray with about 30 seconds to play.

“That’s why we brought him here [from Cincinnati],” Wilson told Fox after the game. “A huge, huge addition. We ran the ball extremely well. We threw it well. We made our plays. It was great.”

Wilson was mostly quiet in the second half. But he made a subtle play with 46 seconds left in the first half. On a third-and-six deep in Seattle territory, Wilson avoided Golden in the backfield and outran linebacker Jordan Hicks for the first down to keep the ball out of Arizona’s hands. Even better, the Seahawks forced a long pass interference penalty later in the drive, and the Seahawks ended up converting a field goal to take a nine-point lead going into the half.

The scramble wasn’t necessarily an MVP-caliber move by Wilson. But it was the play of a winning quarterback.

Earlier this week, NBC Sports’ Joe Fann wrote, “For the last two seasons, Seattle’s margins of victory have been slim. The common path to victory has been Russell Wilson’s greatness overcoming a bottom third defense. So when Wilson plays poorly, it makes sense that the Seahawks start losing games. Seattle’s roster simply isn’t capable of overcoming poor outings from No. 3.”

Before Thursday’s game, it was hard to disagree with that analysis. But perhaps Seattle found a different path against the Cardinals. The Seahawks had a quarterback who played mistake-free football. He played well, but he didn’t need to perform like the best player in the league for the Seahawks to win a game against a tough team. It wasn’t a matter of letting Russ cook. It was a matter of letting everybody else throwing their own spices into the pot.