The Slog: Baltimore vs. the AL East 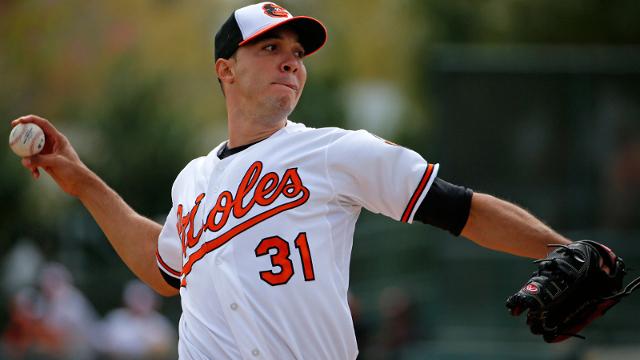 The bad news is obvious: the 2015 Baltimore Orioles, so far, aren’t anything like last year’s 96 win squad. The good news is also obvious, and is just bad news for other people: neither is any other team in the AL East.

Baltimore enters June in third place and three games below .500; with Ubaldo Jimenez its most reliable starting pitcher; with Mike Wright emerging as a young arm to watch in the rotation instead of Kevin Gausman; with Jimmy Paredes the most consistent power hitter on the team (and finally installed somewhat permanently at DH, where he belongs). This is the hallmark of the Dan Duquette Orioles: production from unexpected places — Ubaldo stretches that maxim, perhaps, given his salary, but after last year it’s hard to argue that he was expected to pitch this well for any stretch of the season.

The usual suspects are contributing as well, to varying degrees — Adam Jones had one of the best months of his career to start 2015 before falling off in May, Chris Davis has found his power stroke over the last week, and Miguel Gonzalez and Wei-Yin Chen have been their usual steady selves. Ryan Flaherty’s hitting too, which is fun while it lasts. So long as they keep getting this kind of production out of the pitching staff and some of the lagging bats come around — the shortstop position in particular is a black hole right now — the Orioles should be in good shape.

Especially if the rest of the East keeps playing like this.

Toronto and Boston have two of the worst rotations in baseball; between them, only three current starters have ERAs below 4 — Toronto’s Aaron Sanchez (3.88) and Marco Estrada (3.89), and Boston’s Steven Wright (3.90). If ex-Oriole prospect Eduardo Rodriguez joins Boston’s rotation full-time, and there’s every indication that he will, that will make four — but Rodriguez has one major league start under his belt, and it’s impossible to make any predictions about what he will or won’t do moving forward until his command is further tested at the major league level. The main difference between Toronto and Boston, of course, is that Toronto is hitting the cover off the ball this year while Boston’s offense has been tepid at best; Toronto probably can’t sustain this rate (especially not from the likes of Chris Colabello and the soon-to-return Devon Travis) while Boston is probably going to break out of their funk. Can the Jays continue being this fun to watch, but comically bad? Considering their internal starting pitcher options include Johan Santana, yes, probably. Boston’s a bit more of a danger, but if their front office continues to deny that their ideological push for pitchers under 30 damaged their team both in 2015 and moving forward, then there’s a decent chance they remain in the basement for the rest of the season.

New York is a bit more problematic. They’ve got a bunch of expensive but good veterans — Ellsbury, McCann, Gardner (he’s 31 now; time flies) — and a Mark Teixiera and Alex Rodriguez who are both hitting like they’re four or five years younger. Masahiro Tanaka will be back this Wednesday against Seattle, and a Tanaka/Pineda/Warren top three, while not great, is at least as good as what the Orioles and Tampa Bay are running out, and far superior to the Red Sox or Blue Jays offerings. And at least on paper, the Yankees play team defense pretty well; in practice, the team’s had a bunch of mental mistakes to start the year. If those clear up, New York could become dangerous down the stretch.

Tampa Bay is the most irksome; they weren’t even supposed to be a contender this year, especially not after losing Drew Smyly and Alex Cobb for the season, but no one seems to know how to get guys like Steven Souza, Brandon Guyer, or Joey Butler out. That’s the bad news. The good news is that at least for Souza, this is something teams’ advanced scouting should figure out over the course of the season, and for Butler and Guyer, it’s probably — probably — just a hot hundred PA or so. The real danger is that Jake Odorizzi and Chris Archer are as good as their peripheral stats say they should be, and if that’s the case — and if the hitting keeps coming from enough guys over the course of the season, because David DeJesus, Logan Forsythe, and of course Evan Longoria haven’t been slouches here either — the Rays could carry this thing down to the wire.

It’s hard to tell who the Orioles matchup best against right now. The Jays pitching is in such a state that even though Baltimore’s been bad against them so far this year, they probably can’t win enough games in aggregate to pose much of a challenge down the line. The Red Sox’ entire season hinges on whether or not their entire roster starts performing differently than it does right now, so that narrows things down to the rather reductive “if the Red Sox remain terrible, the Orioles matchup against them well.” The Sox could still do something like trade for Cole Hamels, of course, and Ortiz, Sandoval, and company could turn on the jets at the plate, and suddenly Boston’s a monster again.

By the end of July, the East could potentially be just a two team fight between Baltimore and New York, with the Rays teasing the corners of contention and fighting for the second Wild Card, and if that turns out to be the case then it’s a fight Baltimore stands a good chance of winning. But we could just as easily still be where we are right now: in a five-way slog, no one stepping up to distinguish themselves, everyone staring down everyone else at the poker table, deciding whether to go all-in at the deadline or not.

For all our sakes, let’s hope someone — anyone — steps up in the East.