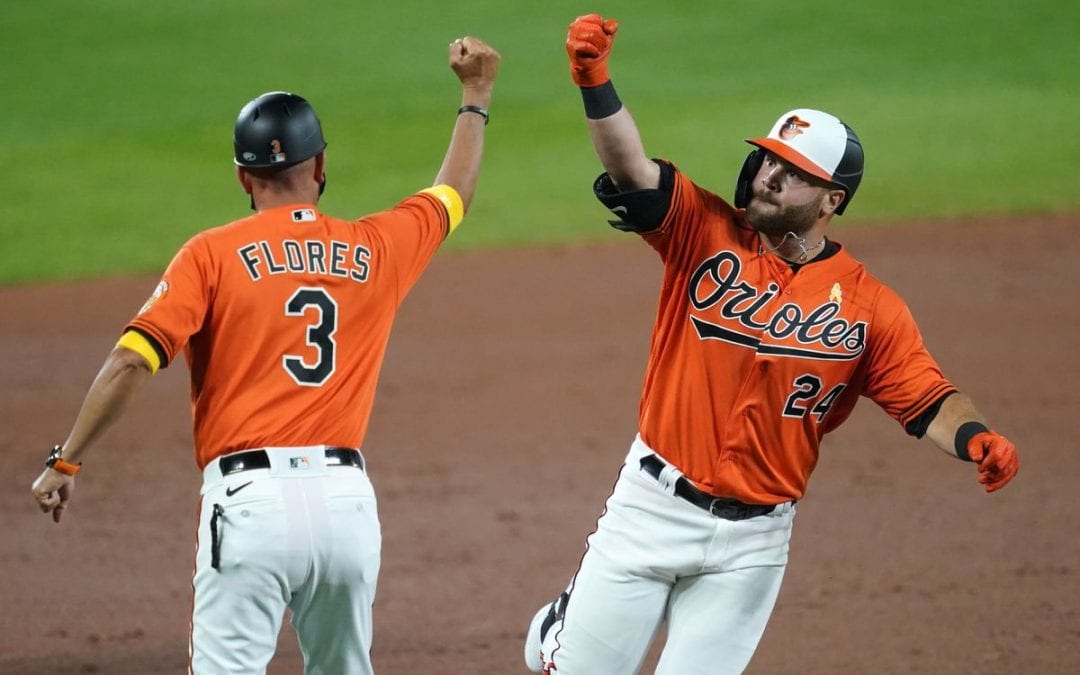 On Friday, the Orioles said goodbye to one of their most reliable power hitters over the last few years when they designated Renato Nunez for assignment. In his three years and 263 games in Baltimore, Nunez hit 47 doubles, 50 homers and drove in 141 runners, good for a .783 OPS and a 108 OPS+.

(You can discuss this on the BSL Board here.

However, I don’t want to focus on Nunez and instead want to look at who has the most to gain from one fewer power hitter in the organization: DJ Stewart. With Nunez out of the picture, it seems like the designated hitter job is now his to lose.

In a bizarre 2020 for all of baseball, Stewart had one of the oddest seasons in the league. In his first eight games of the season, he failed to get a hit but still recorded six walks, creating the unique slashline of .000/.300/.000. The hitless start to his campaign earned him a trip to the Bowie alternate site, but he returned to the roster on September 4, filling in for the injured Anthony Santander. In his first two games he continued to draw walks without getting a hit, earning a free pass three times in six plate appearances.

However, the next day, he started an incredible hot streak. Over nine games against the Yankees, Mets and Braves, Stewart delivered seven homers and 13 hits, boosting his average from a goose egg to a respectable .265 and seeing his OPS rocket from .385 to 1.134. Unsurprisingly, Stewart was not able to hit like prime Barry Bonds the rest of the year, ending his season with a 12-game stretch of zero homers and just one double. Even with only four hits, he still was able to get on-base, earning nine walks.

The most notable part of Stewart’s 2020 season of two cold streaks sandwiched between an incredible hot streak is how his power and ability to draw walks were inversely correlated.

During his two cold streaks, he was still walking in more than 15 percent of his plate appearances to start and end the year, but when he was clobbering the ball, he didn’t end up drawing walks to go along with it. While he still managed to provide a .444 OBP during his hot streak, that number was more a product of his .394 average from 13 hits than his two walks and one hit-by-pitch.

While his power and plate discipline both went through major peaks and valleys, at the end of the season he still had a .261 iso power and walked in 17.9 percent of his 112 plate appearances. Out of everyone with at least 100 PAs, he ranked seventh in walk rate and his iso power was a very solid 40th out of 310 hitters with that many PAs. With the caveat that Nunez had nearly double the plate appearances compared to Stewart, his walk rate and isolated power were lower than Stewart’s.

To what extent is Stewart’s discipline and power sustainable? A sample of 31 games, including a trip to Bowie, during the weirdest baseball season ever isn’t the most reliable set of data to make a meaningful judgment, but it’d be awfully hard to argue he hasn’t earned the chance to get more at-bats as the Orioles figure out who’s a meaningful part of their future. After all, Stewart still hasn’t played 162 games across three seasons in the majors and while you’re in a rebuild, a former first-rounder should get more than 92 games before you reach a final verdict.

While Stewart has earned a chance to hit in 2021, it seemed like there was no good place to put him prior to Nunez’s departure thanks to a logjam in the corner outfield spots. Trey Mancini, Anthony Santander and Ryan Mountcastle are already able to play there and there’s the possibility of Austin Hays and Cedric Mullins spending time in left or right. On top of those, Yusniel Diaz should be expected to debut this year, creating another outfielder to compete with Stewart.

However, there is now a perfect opening for Stewart to get more chances to hit: DH. If we assume the ideal Orioles lineup will stick Mountcastle in left, Santander in right and Mancini at first, he’s the best candidate to start at DH. It gives him the chance to see if he can keep drawing walks and hitting for power without sticking him in the field, where he’s never looked particularly comfortable or talented.

The Orioles knew exactly what they were getting with Renato Nunez and ultimately, it wasn’t enough to decide to keep him. With DJ Stewart, we still don’t know what exactly his talent level is and now Nunez’s departure has given him a golden opportunity. We’ll get to spend 2021 seeing just how good Stewart is and if he could be part of the next winning Orioles team.