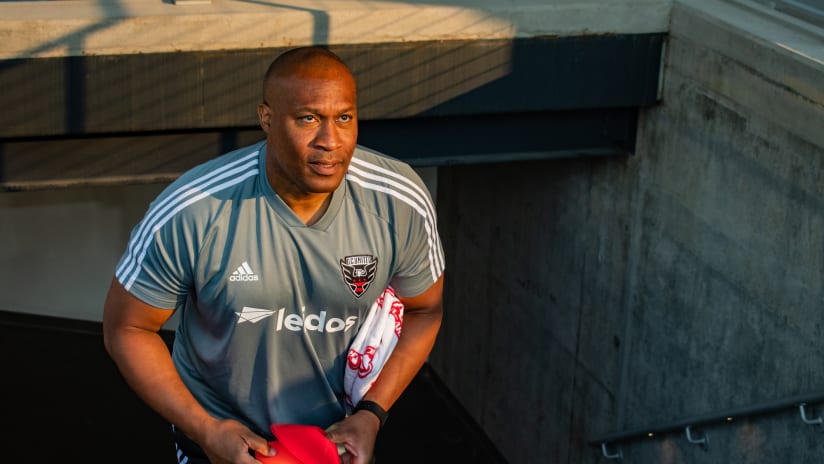 Of all the soccer players to come from the Baltimore area, few have had a more accomplished career than Zach Thornton.

After growing up in Edgewood, Md., and playing high school soccer at John Carroll and college ball at Loyola University of Maryland, Thornton went on to play in 317 MLS regular season and playoff matches over his 16-year career.

Thornton won the 1998 MLS Cup, the 2003 Supporters’ Shield and three U.S. Open Cup titles as a member of the Chicago Fire.

After retiring following the 2011 season, Thornton has spent most of his post-playing days as a coach. He’s been D.C. United’s head goalkeeping coach since 2015.

Last month, Thornton joined Baltimore Sports and Life for an interview about his upbringing in the Baltimore area, his playing days and his transition to coaching.

Here’s what he had to say.

(Editor’s Note: This interview has been edited for length and clarity.)

Baltimore Sports and Life: I know you were a multi-sport athlete growing up. Was there ever a sport that took more of your focus?

Zach Thornton: I played a lot of lacrosse. It was the first sport I played. There were a couple guys in the little court in the neighborhood who played sports together all the time.

It was spring lacrosse and fall soccer, and that’s how it was all through high school and everything. And people were always asking me, how do you find time to do both? That’s all I wanted to do. You just played lacrosse in the spring and you just played soccer in the fall.

Actually, throw basketball in there. I actually played basketball in high school as well. It never seemed like too much for me. It was just what I enjoyed doing. It never was, like, overwhelming.

BSL: Obviously lacrosse is huge in this part of the world, and you ended up being a two-sport athlete at Loyola. Which sport got you more recruiting attention?

ZT: Just because Maryland is huge in lacrosse, I would say more coaches recruited me in lacrosse than soccer. In my mind I was going to play both. That was just — it was not an arrogant thing — it was just what I wanted to do. But I would say it was more attention for lacrosse.

BSL: So you finish at Loyola, where you were a third-team All-American in lacrosse. And there was pro indoor lacrosse at the time. And Major League Soccer hadn’t even started yet. So did people think you were sort of crazy for pursuing soccer?

ZT: Well for starters, I don’t think I had ever played indoor lacrosse. As much as I played lacrosse — and I didn’t play it as much as some of the guys cause I didn’t play it in the fall — I don’t think I had ever played box lacrosse. The Thunder were going to draft me and I told them not to do that. And by the time I was leaving lacrosse I had had a little touch of the U.S. men’s national (soccer) team.

I had an idea of international soccer, that hopefully I could go somewhere and play. I heard rumors of the MLS coming so we’ll see how this goes. Right after my senior year, we had residency in Chula Vista, Calif., for the Olympic team. So I was there for six, seven months. That’s when I started getting the idea for professional soccer. And there was no real lacrosse league. So my decision was made.

BSL: Let’s back up a second. How did you become a goalkeeper?

ZT: I was playing with an under-10 team and we’re all kind of taking turns. It was my turn to go in and I was good at it, and that was it.

And then before high school, I don’t know what had transpired but I had just kind of started playing right back, right midfield. I don’t know how I got away with it, because my club team coach introduced me to the John Carroll coach as a goalkeeper for sure, but I wasn’t going to make it as a Freshman. So on JV I tried out as a right back, made it as a right back.

BSL: I’ve heard Brad Friedel and other famous American goalkeepers say being a multi-sport athlete really helped them develop their craft. Do you feel the same?

ZT: Totally. You see guys today and obviously those guys are totally skilled and talented. But just offensive moves, how to position your body, how to box out, just offensive spacing and offensive maneuvering, those kind of things you get from playing other sports, those definitely help. With lacrosse, you learned spacing and being able to handle contact going up for a rebound, all those kinds of things. Being a little bit of a bigger person, trying to guard a smaller guy, being able to move your feet and stay in front of a guy, all those things I think definitely helped.

BSL: And Bruce Arena, who was one of your coaches with the Olympic team, was also a multi-sport athlete.

ZT: Bruce was a goalkeeper and a lacrosse player, and he loves to tell me he was better than me at both.

BSL: But it was Bruce Arena and Bob Bradley — two of the most accomplished coaches in U.S. Soccer history — who helped forward your career, correct?

I’ve known Bruce and Bob forever. We played Bruce my junior year, that’s when Virginia had won four straight national championships. They had those stacked teams, and I had a really good game against him. They beat us 2-1. Bruce recommended me from the region if I’m not mistaken to get my first sniff of the Olympic team.

BSL: You made your pro debut in 1996 after joining the MetroStars as a backup to Tony Meola. What do you remember about that first game?

ZT: Tony Meola hurt himself playing 5-v-2. I didn’t find out until I was at the stadium that I was playing. I get to the stadium and I see Tony on crutches.

BSL: Eventually Bob Bradley, who was once Arena’s assistant, takes you in the expansion draft with the Chicago Fire in 1998, and you break through to become the starter on what is still the only expansion team to win MLS Cup. Was this when you began to realize you could have a long career?

I would say even the ‘98 year when we won it and I had a really good year, I wouldn’t say until the next year I felt comfortable saying I’ll be able to do this for a while. In ‘98, I didn’t even start at the beginning because we had Jorge Campos on the team. I was kind of in and out, in and out. But down the stretch, I started down the stretch and in the playoffs and the final. So going to that next year I started to feel more comfortable.

BSL: So you go on to have a great career. Then you retire in 2011. Was coaching on your radar or did it just sort of come organically?

ZT: I hadn’t been home in the Baltimore area basically since I left to play pro. So I decided I just want to go home, be with my parents, be with my family a little bit, figure out what I want to do. And I think it was late December the year I retired, I was at a Ravens game. I saw a guy I played with in college. He said, ‘Why don’t you go sit down with Mark Mettrick, the Loyola coach. I’m sure they’d love to have you over there for as little or as much as you can do.’ So I called him. I said I just want to be around the game a little bit. I’m not sure what I want to do. And I really enjoyed it.

BSL: From there, you went on to be an associate head coach at Villanova before joining Ben Olsen’s staff with D.C. What was the biggest adjustment to working as a coach instead of a player?

BSL: What kind of coach would you say you are?

ZT: As a college coach, I would definitely say I was more hard-nosed, more of a disciplinarian, because you a little bit have to be. In the pros it’s more of a peer type situation. I mean obviously you have to put your foot down when you need to put it down. But they’re all pros. We’re all trying for the same goal. No one is trying to get over anyone.

BSL: You’re still on the D.C. staff, even though the club parted with Ben Olsen, the manager who hired you, last season. What has that transition been like?

ZT: Ben and I are friends. We’ve known each other way before I got here to D.C. United. He’d asked me twice to work with him. You know the end game. Very few times do you ride off in the sunset. That’s very, very rare. But knowing it can happen, it is still a sudden event when it does happen.

Ben gave me my chance in the pro ranks, so I’ve always got love and loyalty to him. The toughest part during the transition was we didn’t know who the coach was. The decision wasn’t made I don’t think until this year, sometime in January I think. That was the hardest part, because when that decision happens they could bring in their own coaches. But other than that, (new manager) Hernan Losada has been great. He knows his system well and he teaches it well.

BSL: Did you think about what you might do if Losada had decided to bring in his own goalkeeper coach?

ZT: I was still under contract, still had a year on my contract so I wasn’t super stressed, but I knew once I got in front of Hernan and started coaching — even though he is from Argentina and had played and coached in Belgium, soccer is a common knowledge. But if they decided to go another direction, that’s the business. Once I met him and first spoke to him, I felt confident things would work well.

BSL: There was still so much uncertainty surrounding MLS and the future of American soccer when you played. Now in the 26th MLS season, can you believe you’re still making a living in soccer?

ZT: Considering me being in college and high school, and growing up the big thing was going to a Baltimore Blast game. That was the biggest thing to go to the Blast game. And if you were the youth team that got to play at halftime, that was like the hugest thing ever.

And then that league kind of fell off a little bit, and there was no real outdoor league, and even the first few years of MLS were uncertain.

To see where things are now, I mean … the league’s grown leaps and bounds and I’m sure you expect and want this to happen. But to actually be here is something special.

BSL: If you could go back in time, what would you tell that kid who played lacrosse in the spring and soccer in the fall about his future?

ZT: Yes, I’m definitely enjoying it. It’s great. It has its days, but for the most part, I love it.