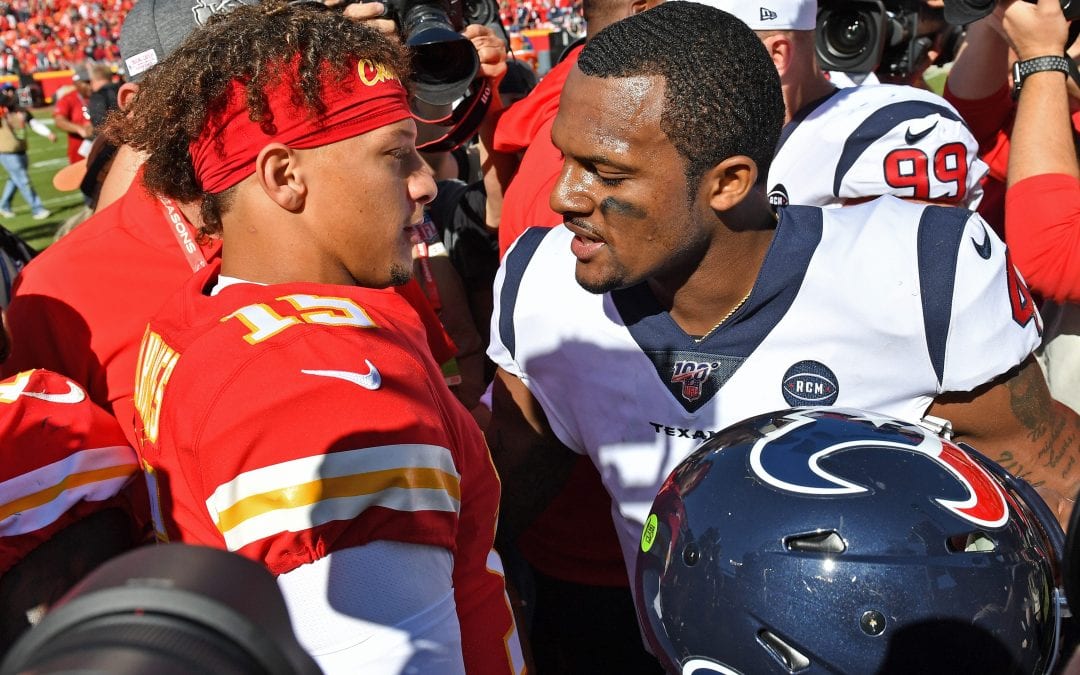 Amid the black empowerment movement taking over professional sports, the NFL — who in most minds continues to act poorly when it came to handling its players and black issues in America — has managed to have a natural breakthrough.

Not only because they decorated their fields with messages going against racism and allowing players to recognize victims of police brutality openly, but also having ten black quarterbacks start opening weekend.

It’s the most ever for an opening weekend, and two of them played the first game of the season last Thursday Night.

Let’s review Week 1 for each of the 10 African-American starting QB’s:

The half-billion-dollar man didn’t have a great game to his standards, but he led the Chiefs to a 34-20 win to open the season. Mahomes used six receivers to complete his 24 passes, Sammy Watkins being his primary target.

Watson and the Texans offense struggled a bit to keep up with the Chiefs high powered offense. They found themselves down 24 points to start the fourth quarter. Wason scored twice in the fourth to cut the lead to two possessions, but it was too late.

The reigning MVP didn’t miss a beat in the Ravens’ season opener. Lamar Jackson dropped dimes all over the field, once again dispelling the myth; he can’t throw the ball. He has a talented receiving group led by a healthy-motivated Hollywood Brown.

Cam’s numbers weren’t eye-popping but what’s most impressive is the number of times he managed to run the ball. What seems to be a problem in Carolina, the Patriots are utilizing the former MVP’s mobility. Only time will tell if this is a one-game scenario.

Wilson probably had the best performance of the day for all quarterbacks. Wilson has been nothing short of spectacular within the Seahawks offense, which gives him the freedom a mobile quarterback need. If it weren’t for a historical season from Jackson, Wilson would have been the league’s MVP last year, but this year could be his for the taking.

Just imagine when Murray can complete his passes at a larger clip and rushing for 90 yards. Just give it time, we’ll be able to if Murray and this offense can mature.

A controversial pass interference penalty late in the game stripped Dak of a possible game-winning drive, but his debut with the new head coach Mike McCarthy didn’t excite the football world. The Cowboys still seemed stagnant at times, and we were still waiting for Dak to make that leap.

Tyrod Taylor performed as well, leading the Chargers to a 16-13 win over the Bengals, finishing with a better QB rating than number one, Joe Burrow. Dwayne Haskins also had a decent day leading his team to a comeback victory over the Eagles. Teddy Bridgewater’s debut as the Panthers starting quarterback ended with a four-point loss to Las Vegas.

While this is a monumental moment in black athletes’ history in professional sports, it supersedes the expectation most have on a black quarterback. While 70% of the NFL players are black, only 31% are starting quarterbacks. Dating back to the legendary performance by Doug Williams in the 1988 Super Bowl, the NFL has made a slow progression in giving black quarterbacks a fair chance at being a starter.

Over the decades, Black quarterbacks have had their skillsets put inside a bottle to fit the “pocket passing” narrative that has been pushed for years. Bill Polian suggested Jackson change his position, even though Jackson had some of the best numbers we’ve seen from a quarterback in college football as a quarterback. To Polian’s defense, the Hall-of-Fame Executive built championship caliber teams with traditional “stand & throw” typer of passers like Peyton Manning, and Jim Kelly. Jackson’s build and athleticism the exact opposite of those two.

Michael Vick, who had unbelievable skills at the quarterback position, didn’t get the same opportunities as Jackson, who works in an offense designed for his skillset. Vick had to deal with the prehistoric mindset of the NFL coaches and coordinators. Vick success came from playing in a pro-style offense, unlike the majority of black quarterbacks today.

With the emergence of the spread offense in college and coaches bringing that style to the professional ranks, making offenses more explosive than ever before, black quarterbacks and coordinators are becoming more creative, dispelling the unfair bias that black quarterbacks are “mentally unequipped” to be starting NFL quarterbacks.

All ten players can move outside of the pocket, but the top of the food chain are elite throwers.  To see if all 10 of theses passers (including Jacob Brisset, who has a chance to be a starter by the end of the season) will land on top quarterbacks in the league.