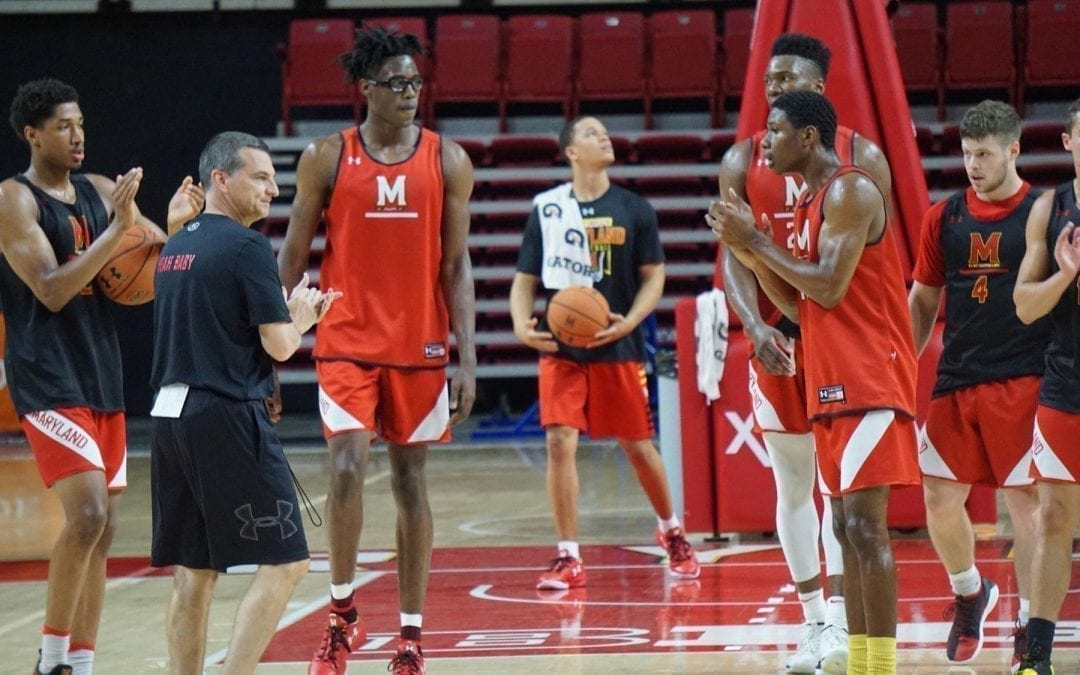 It’s difficult to make too much out of the recent trip to Italy that the Maryland Men’s basketball team recently completed. From its conception the trip was branded as a ‘bonding’ opportunity for the team. The need for the bonding only grew in the offseason when the program lost Kevin Huerter and Justin Jackson to the NBA draft and the Mark Turgeon and his staff added six new players to the program for the 2018-19 season.

Five of those six rookies jointed the Terps on the trip overseas. Together with the returning core of veterans they rolled each of the three opponents they played in Italy and did so in fairly democratic fashion – each game had a different leading scorer and rebounder. A major caveat here…I was not in Italy (damn!) so I cannot comment on any of the games. I was, however, able to see the team practice a few times prior to their leaving and thought I’d offer up a few way-too-early assessments.

To begin with, I love an infusion of fresh young talent like the Terps have. In college hoops guys come and go – often times way too quickly. In addition each team makes its own chemistry. One team one year with a bunch of talent my win 20 games and the same team with less talent the next year wins 24. In college basketball it happens all the time. With the margins for error so slender for most teams the chemistry and energy and buzz that can come with some new players can make all the difference in the world.

Random thoughts in no particular order….

For all the talk and buzz about some of the new guys, Anthony Cowan is the most important player on this team. He will have a lot more help in the back court this year (I’ll get to that). There is no question his game evolved between his freshman and sophomore seasons and he led the team in scoring last year. Now is the time for the intangible part of his game to evolve. This is a team whose most talented guys are freshmen and sophomores. They need Ant to lead them. If he does then this team will be in great shape.

My favorite part of watching practices for two days – when the staff split Bruno Fernando and Jalen Smith up and put them on separate teams and had them cover each other. Together these guys are going to be a problem for folks. Barring injuries you have two ultra-competitive, high energy post players who can complete with anybody anywhere. Apart they were incredibly entertaining. Sticks (Smith) simply does not have the body mass to compete with Bruno between the blocks but he was certainly a willing defender and completely unafraid.  Sticks also seem to completely understand the advantages of his mobility and outside shooting on his offensive end and Bruno had to go chase him. It was like watching a caveman against a road runner. Bruno is relentless inside and Smith is the poster boy for the positionless new-age big man. I’ll call it an entertaining draw.

Freshman Eric Ayala is ready to play Right Now. As most folks know he spent a prep year at IMG Academy in Bradenton, Florida and has as mature a game as you’ll find in a freshman. His presence will allow Cowan to play off the ball from time to time and his body size and type and defensive instincts will allow him to cover either opposing guard on D.

Aaron Wiggins comes in with a shooter’s reputation but he totally has a scorer’s mentality. He’s got a bunch of moves that we haven’t seen much of, including a couple of Dirk Nowitzki up-the ladder- one foot stepbacks. I had the chance to meet a bunch of the new guys after one of the practices and Wiggins is going to get major love from Terp fans. He has the game and the smile and the presence.  Ayala might be a tad more ready on day one but Wiggins clearly has that certain something.

Serrel Smith can score it. The Jamal Crawford comparisons are pretty comical and not far afield. He might find himself in a bit of playing time crunch as a reserve guard but he can heat up very quickly. If he adjusts to things defensively he’s going to play a significant role for this team. One of the guys he will compete against for some time is walk-on Reese Mona. Last year Mona proved he could play spot minutes. This year he is bigger and stronger and plays both ends. He also plays hard as hell. That kind of effort will earn you some minutes.

I didn’t see much of freshman Trace Ramsey but he looks to be an investment in the future, to a degree. The newest Terp – Ricky Lindo – had not yet been added to the roster and senior center Ivan Bender was still doing some rehab on his injured knee. He expects to be cleared for workouts next month.

Next year looms large for two sophomores – Darryl Morsell and Josh Tomaic. Morsell had his moments last year but was thrust into a difficult situation when Justin Jackson got hurt. He played almost 29 minutes per game last year…a little too much for him at that time. Still, he worked at it, played hard and became a guy that his team knew would compete every game. He shot the ball well in Italy and made a bunch of 3’s (not sure exactly how many – stat sheets aren’t a thing in Italy).  Because of his offensive struggles last season he comes into the year as an X-factor of sorts. I like Josh Tomaic. He wants to be a player and works hard. He also is a loose ball/rebound magnet who can make some threes. His problem is that he’s going to find himself playing behind two prospective NBA talents this year. That should make him better as well.

Cliff Notes approach here….huge positives for a dynamic front line and proven high-level point guard. Additional positives for having college ready back court help ready from day one. A few things that we’re going to have to see are the development of some interior depth to back up Smith and Fernando and a bunch of the critical parts – specifically Bruno, Cowan and Morsell – taking the next steps in their development.

A fixture in the Washington sports scene since his days as a player and a coach, Chris Knoche has accumulated a diverse resume as a media presence in town for more than two decades. That resume has earned him opportunities on both national and local stages and made him a Washington DC staple on radio, television and in digital media.