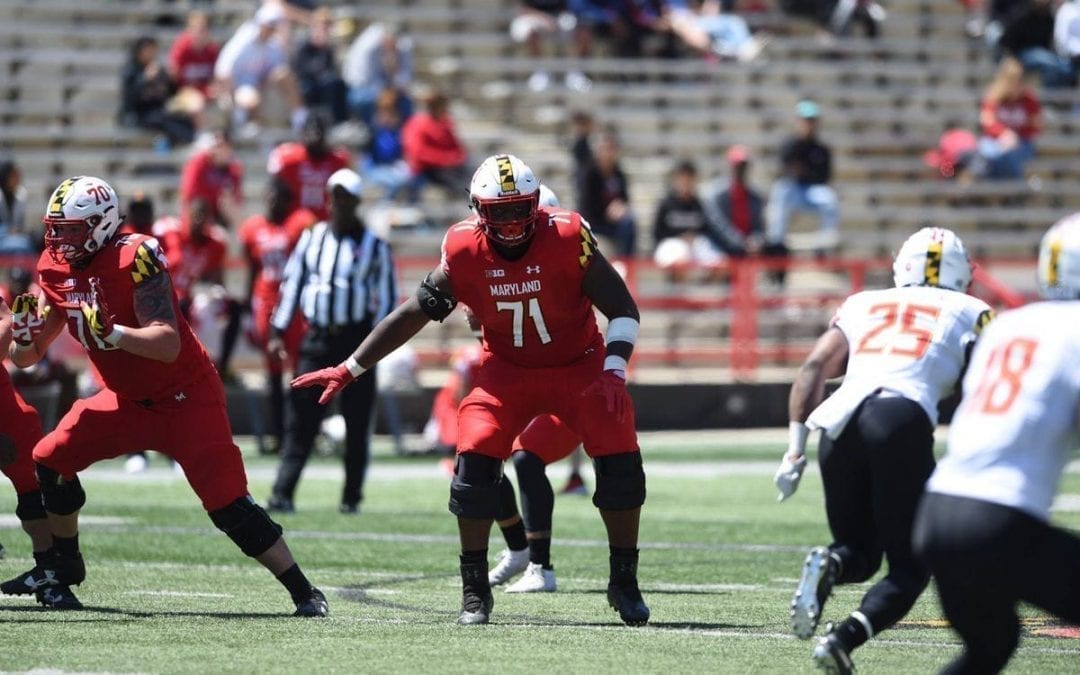 The 2019 season saw the Terrapins forced to turn to two new starters on the outside of their offensive line after both Derwin Gray and Damian Prince departed for the NFL. Jaelyn Duncan and Marcus Minor stepped up to fill those voids, and both will return to start in 2020. The team is hoping that the year of experience they gained last year will result in more consistent play this season.

This is the fifth in a series of articles previewing Maryland football’s 2020 season on a position-by-position basis. Be sure to check in regularly, and give your thoughts on my projections at the link below.

(Discuss this article at the BSL Message Board here.)

Duncan started all but the first game of 2019 at left tackle as a redshirt freshman, and performed well in his first collegiate action. A former 4-star recruit, he’ll need to work on more consistent pass protection as he progresses in his career.

I’ve projected Duncan to serve as the team’s starting left tackle in 2020. With a year of starting experience under his belt, the coaching staff will be looking for him to take the next step as a leader on the offensive line this season.

Minor started every game he played in at right tackle last season, missing the team’s games against Rutgers and Purdue due to injury. He’s started 14 games during his first three years in College Park, and brings solid experience to the line as he looks to form another strong bookend combination with Duncan for the next two seasons.

I’ve projected Minor to serve as the team’s starting right tackle in 2020. Similarly to Duncan, the coaching staff will be hoping that a year of starting experience last season leads to more consistent play this year.

Bradley missed the entirety of the 2019 season due to a preseason injury. He’ll return for his final collegiate season in 2020 with a chance to be one of the team’s top reserve linemen. An imposing presence at 6-foot-8, he appeared in four games in 2018 after arriving in College Park as a Junior College prospect from Lackawanna Community College.

I’ve projected Bradley to serve as Duncan’s primary backup at left tackle in 2020.

Anderson appeared in all but one game last season, starting at right tackle in the team’s game against Rutgers due to Minor’s injury. He solidified himself as one of the team’s top reserve linemen, and has a chance to do the same in 2020.

I’ve projected Anderson to serve as Minor’s primary backup at right tackle in 2020.

Lunsford appeared in two games during his true freshman season, allowing him to take a redshirt while gaining some experience on the field. He has experience playing a number of different positions across the offensive line, meaning he could wind up playing tackle or guard if the need arises.

I’ve projected Lunsford to serve as the team’s third-string left tackle in 2020.

Like Lunsford, Hunt played in two games last season. He has good size at 6-foot-7, but hasn’t yet been able to crack the two-deep depth chart during his Maryland career.

I’ve projected Hunt to serve as the team’s third-string right tackle in 2020.

Green comes to College Park as a 3-star recruit from St. Frances Academy in nearby Baltimore. He’s the team’s highest-ranked offensive tackle in their 2020 recruiting class and has excellent size for a freshman, standing at 6-foot-6 and weighing in at 310 pounds.

I’ve projected Green to serve as the team’s fourth-string left tackle in 2020, and I’d expect the coaching staff to redshirt him. However, if he impresses during summer camp he has more than enough talent to crack the two-deep immediately.

Glaze comes to College Park as a 3-star recruit from West Mecklenburg High School in Charlotte, NC. The Terrapins offered him early in the recruiting process, and he chose them over offers from Connecticut, Florida International, Massachusetts, and a number of other FCS schools.

I’ve projected Glaze to serve as the team’s fourth-string right tackle in 2020, and like Green I’d expect the coaching staff to want to redshirt him.