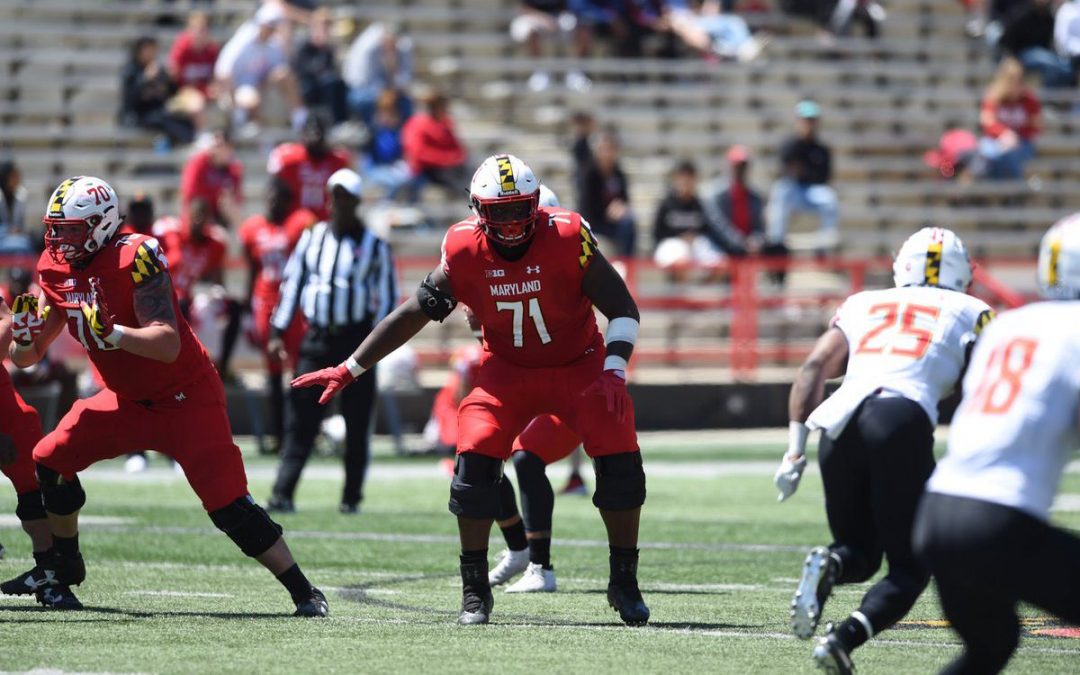 Ever since Maryland joined the Big Ten Conference, one of their most glaring talent deficiencies has been along their offensive line. Against the conference’s elite pass-rushers, the Terrapins’ offensive tackles have typically been unable to keep the team’s quarterbacks upright. While depth at the position is still a concern, head coach Michael Locksley and his coaching staff are hopeful that they’ve found two quality starters capable of holding their own in conference play.

Can the starters stay healthy?
Jaelyn Duncan and Spencer Anderson are both solid options as starters at both offensive tackle positions. The depth behind them however, leaves a lot to be desired. The second-team tackles tended to struggle in the team’s Red-White Spring Game, which is certainly a concern.

Will Anderson be able to play his natural position?
Anderson was pressed into duty as the team’s center during spring practices because Austin Fontaine has struggled to put on enough weight to be a legitimate option at the position. Maryland signed Aric Harris from the junior college ranks in May but if he’s unable to win the job and Fontaine is still underweight, Anderson may be forced inside.

Are reinforcements on the way?
Locksley has two primary focuses for his 2022 recruiting class: quarterbacks and offensive linemen. With three signal-callers already committed, his focus is squarely on adding talent along the offensive line. They’ve added just one lineman to the class so far, but have a number of others on their radar.

Braswell enters his first season as Maryland’s offensive line coach after Locksley moved on from John Reagan after two years on the coaching staff. Braswell served as a volunteer analyst with the team last season and made a very positive impression on both Locksley and the players. He brings five years of NFL coaching experience with him to College Park and played college football at Hampton University, which may open some recruiting access to Virginia’s coveted Tidewater area.

Duncan has started 16 consecutive games at left tackle for the Terrapins, dating back to the 2019 season. While he’s struggled with consistency at times particularly during conference play, he showed improvement last year and did a solid job of protecting Taulia Tagovailoa’s blind side.

I’ve projected Duncan to serve as the team’s starting left tackle in 2021. The team will be hoping he can continue his streak of consecutive games played, because the options behind him are all relatively inexperienced.

Anderson has played in all but one of Maryland’s games dating back to the 2019 season, and started at both right tackle and center last year. As mentioned above, the team is hopeful that he’ll be able to remain on the outside in 2021 due to the lack of quality starting options at the offensive tackle position.

I’ve projected Anderson to serve as the team’s starting right tackle in 2020 but if Harris and Fontaine prove unable to win the starting center job, Anderson would be forced to move inside.

Glaze joined the team before last season as a 3-star recruit from West Mecklenburg High School in Charlotte, NC. He appeared in just one game as a true freshman. I’ve projected Glaze to serve as the team’s second-string left tackle in 2021.

Moran joined the team last season after spending the 2019 season at Lackawanna Community College. He played in three games and started at right tackle against Indiana due to the large number of players who missed that game after testing positive for COVID-19.

I’ve projected Moran to serve as the team’s second-string right tackle in 2021. He struggled quite a bit during the Red-White Spring Game, but would likely become the starter if Anderson is forced inside to center.

Wilkins joined the team as a walk-on last season after playing his high school football at Arundel High School in Gambrills, MD. I’ve projected him to serve as the team’s third-string left tackle in 2021.

Varhall has joined the team as a preferred walk-on this season, and comes to College Park from the esteemed IMG Academy in Bradenton, FL. He has excellent size at 6’8”, 320 lbs. and will be a development project for Braswell. I’ve projected him to serve as the team’s third-string right tackle in 2021.

Long is the lone scholarship offensive lineman in Maryland’s 2021 recruiting class, and comes to College Park from Hazelwood Central High School in Florissant, MO. I’ve projected him to serve as the team’s third-string left tackle in 2021.

After playing tight end last season, Fagan has transitioned to the offensive line. He joined the team as a walk-on from Gonzaga College High School in Washington, DC. He has good height at 6’7”, but will be working on getting his weight up. I’ve projected him to serve as the team’s fourth-string right tackle in 2021.