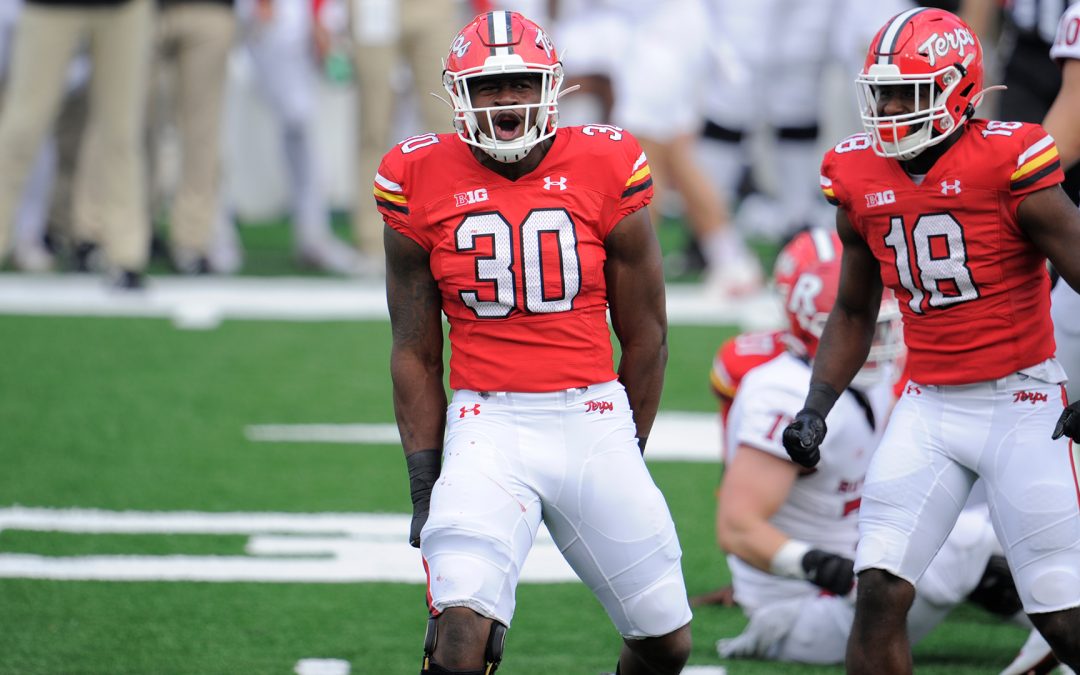 While there were rumblings that the Terrapins would be moving to an even-front defensive scheme in 2021, they’ll be sticking with the 3-4. This means that the team’s outside linebackers will be expected to play both standing up and with a hand in the dirt at times, and tasked with more than simply rushing the passer. They’ll be relying on some of their new blue-chip talent to make an immediate impact at this position.

Who starts across from Nchami?
Durell Nchami is the clear starter on the weak-side, but there should be healthy competition at the strong-side position. The primary question will be whether one of the team’s blue-chip freshmen is ready to take on that role, or if they’ll turn to a player with more experience.

How versatile are the inside linebackers?
While there is a good amount of talent already at the outside linebacker position, there are a number of inside linebackers on the roster who have pass rushing ability. How often will new defensive coordinator Brian Stewart move players like Ruben Hyppolite II and Branden Jennings outside and exploit their athleticism on the edge?

Zook served as an analyst on Locksley’s staff during his first two seasons in College Park, and is now an official member of the coaching staff. He brings 43 years of coaching experience to this job, including 6 seasons coaching with Locksley at both Florida and Illinois. He’s only ever coached defensive backs as a position coach during his career but will likely be assisted by Brawley Evans, who moved from outside linebackers coach to inside linebackers coach this year.

After seeing the field sparingly in his first two seasons, McCullough played in all five of Maryland’s games last season and started in two of them. He finished tied for fifth on the team in tackles for loss.

I’ve projected McCullough to serve as the team’s starting strong-side linebacker in 2021, but he’ll likely be pushed hard by the younger players below him on the depth chart during summer practices and throughout the season. Due to his experience he’ll probably get the first crack at the job particularly on base downs, but could be removed on passing downs in favor of a younger pass-rush specialist.

There were high hopes for Nchami in 2021 after he missed the entirety of 2019 with an injury he suffered during the preseason. Unfortunately he dealt with some nagging injuries and was only able to appear in three of the team’s five games last year. He made the most of his time however, racking up 3 tackles for loss, 2 sacks, and forcing two fumbles. His performance in the season finale against Rutgers earned him Pro Football Focus honors as the National Defensive Player of the Week.

I’ve projected Nchami to serve as the team’s starting weak-side linebacker in 2021. If he can stay healthy, there’s no reason why he can’t step up as Maryland’s best pass rusher and put together a breakout season.

Robinson comes to College Park as a 4-star recruit from Quince Orchard High School in Gaithersburg, MD. 247Sports ranked him as the 4th-best edge rusher in the country, and the 3rd-best player in the state of Maryland. He had offers from nearly every other powerhouse school in the country, but chose to stay home.

I’ve projected Robinson to serve as the team’s second-string strong-side linebacker in 2021, but he’ll likely see immediate playing time on passing downs to exploit his freaky athleticism and pass rushing abilities. His coverage skills likely need some work, but if he can improve on those enough he may take over the starting job full-time before the season ends.

Shockley is another local freshman pass rusher, coming to College Park from St. Frances Academy in Baltimore, MD. 247Sports ranked him as the 38th-best edge rusher in the country, and the 20th-best player in the state of Maryland. While his offer sheet was slightly less eye-popping than Robinson’s, it was impressive nonetheless.

I’ve projected Shockley to serve as the team’s second-string weak-side linebacker in 2021. Like Robinson, the coaching staff may look to get him on the field immediately on passing downs while he works on his coverage abilities.

Burgess came to College Park as a 3-star recruit before last season from the state of Florida. The majority of his playing time came on special teams, where he played in four of the team’s five games. I’ve projected him to serve as the team’s third-string strong-side linebacker in 2021.

Holt saw the field in all five of Maryland’s games last season, and started against Penn State and Indiana. With a number of injuries at the outside linebacker position in 2020, he stepped up in a big way and impressed the coaching staff. I’ve projected him to serve as the team’s third-string weak-side linebacker in 2021, but he’ll have every opportunity to win some situational snaps during summer practices.

Purcell joined the team as a walk-on before the 2019 season and didn’t see the field last year. He played his high school football at Northern High School in Owings, MD. I’ve projected him to serve as the team’s fourth-string strong-side linebacker in 2021.

Wilmot came to College Park last season as a 3-star recruit from the state of Florida. He has the ability to play outside linebacker and at the 5-technique position along the defensive line. I’ve projected him to serve as the team’s fourth-string weak-side linebacker in 2021.

Butler, Jr. comes to College Park as a 3-star recruit from St. Frances Academy in Baltimore, MD. 247Sports ranked him as the 55th-best edge rusher in the country, and the 25th-best player from the state of Maryland. I’ve projected him to serve as the team’s fifth-string weak-side linebacker in 2021.