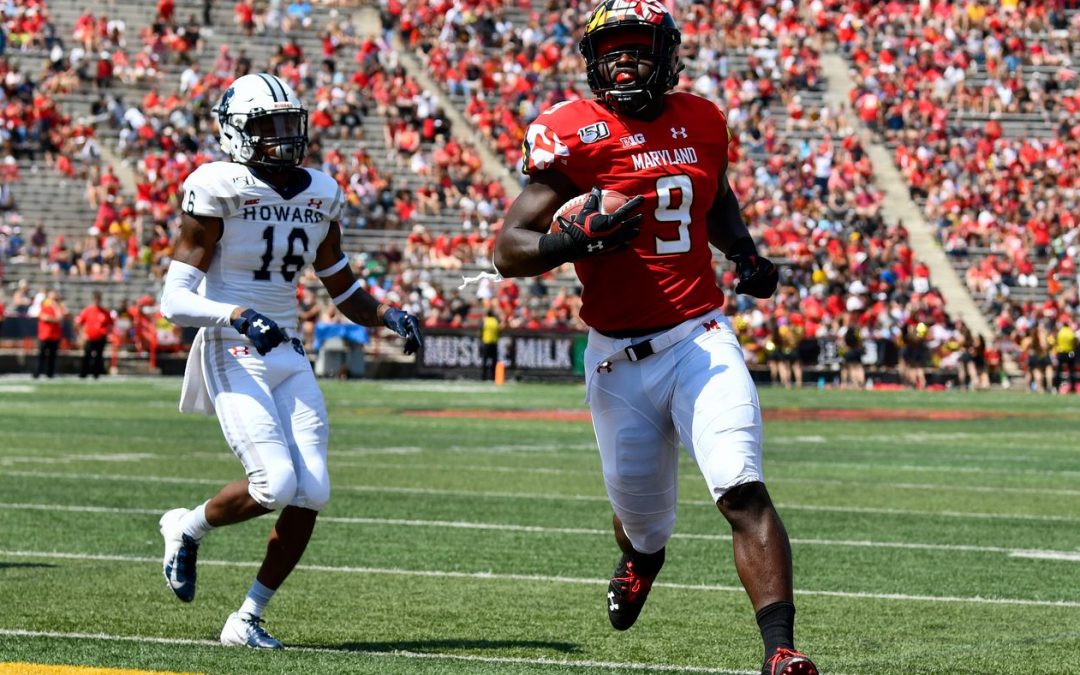 For as involved in Maryland’s offense as the tight end position was in 2019, it was essentially non-existent last season. After Chigoziem Okonkwo announced he’d be sitting out the season after being diagnosed with myocarditis, the team was left extremely thin at the position. This year however features a relatively deep tight end group with plenty of fresh young talent. Combined with the wealth of talent at the wide receiver position, Taulia Tagovailoa will have plenty of weapons at his disposal.

How different does the offense look?
Tight ends didn’t play much of a role in the offense last season other than serving as blockers. With the pass-catching abilities of players like Okonkwo, Corey Dyches, and the incoming freshmen on the roster for this season, offensive coordinator Dan Enos will be tasked with getting them as involved as possible in the passing game.

What role can the freshmen play?
Head coach Michael Locksley and his staff added four tight ends in their 2021 recruiting class, three of whom enrolled early and participated in spring practices. While it likely isn’t entirely necessary for any of them to play major roles immediately, the coaching staff would likely welcome one or two of them impressing enough this summer to become a part of their weekly gameplans.

Is blocking going to be a concern?
While most of the tight ends on the roster are known as excellent pass-catchers, their blocking skills still leave some to be desired. If players like Okonkwo and Dyches can’t improve in that respect, they may lose playing time to stronger blockers such as Malik Jackson.

Miller is entering his third season as Maryland’s tight ends coach and his first as the team’s passing game coordinator. He’s been recognized as one of the biggest rising stars in the college football coaching ranks, and had the coordinator position added to his title in an attempt to keep him in College Park for at least another year.

After being diagnosed with myocarditis, Okonkwo sat out the entire 2020 season but returned in time to participate in spring practices. He was set for a breakout year after very impressive freshman and sophomore campaigns. Despite sharing snaps with Tyler Mabry in 2019, he finished third on the team in receiving yards and caught two touchdown passes. If he can become at least a serviceable blocker, he has more than enough talent to play at the next level.

I’ve projected Okonkwo to serve as the team’s starting tight end in 2021. While Enos will likely use a few different tight ends this season, Okonkwo ought to receive the majority of snaps. He can be used all over the field, and is a mismatch nightmare for opposing defenses when he’s playing at the top of his game.

Recruited as a wide receiver, Dyches made the transition to tight end during spring practices. While he’s on the smaller side for the position, he impressed the coaching staff enough to receive a large number of snaps during the team’s Red-White Spring Game. Like Okonkwo he’ll need to work on becoming a serviceable blocker, but he has enough pass-catching talent to have a role offensively.

I’ve projected Dyches to serve as the team’s second-string tight end in 2021. He’ll likely receive most of his snaps in the slot or in the wing until he bulks up enough to play as an in-line tight end.

Faced with an extremely thin tight end position, Jackson was thrust into a starting role last season. He was essentially non-existent in the passing game, but proved to be a solid blocker.

I’ve projected Jackson to serve as the team’s third-string tight end in 2021. Depending on the development of Okonkwo and Dyches’ blocking, Jackson could be the team’s top option as a blocking tight end.

Originally recruited as a linebacker, Blount was one of two players to make the transition to tight end before last season began. He didn’t see the field at all in 2020, but has good size and got some playing time in the team’s Red-White Spring Game.

I’ve projected Blount to serve as the team’s fourth-string tight end in 2021. Like Jackson, he’d likely only see the field as a blocker but could see some playing time on special teams.

Dippre comes to College Park as one of four tight ends in Maryland’s 2021 recruiting class. He has excellent size (6’5”, 250 lbs.) and also played quarterback at Lakeland High School in the state of Pennsylvania. Ranked as a 3-star recruit, 247Sports listed him as the 47th-best tight end in the country.

I’ve projected Dippre to serve as the team’s fifth-string tight end in 2021. He failed to break through in a major way during spring practices, so may be destined for a redshirt season before getting a chance at more playing time next year.

Wolff comes to College Park as a 3-star recruit from Venice High School in the state of Florida. 247Sports ranks him as the 46th-best tight end in the country, just one spot above Dippre. Just a touch slimmer than Dippre at 225 lbs., he has the skills of a wide receiver in a smaller tight end’s body.

I’ve projected Wolff to serve as the team’s sixth-string tight end in 2021. Like Dippre, he’d likely be best-served by taking a redshirt year before fighting for significant playing time in 2022.

Bearns comes to College Park as a 3-star recruit from Baltimore’s St. Frances Academy. 247Sports ranks him as the 77th-best tight end in the country, but he was recruited to Maryland as a fullback. He’ll play a hybrid fullback/H-back position for the Terrapins, and has a chance to see the field as a true freshman if the coaching staff isn’t impressed by the blocking abilities of the players above him on the depth chart.

I’ve projected Bearns III to serve as the team’s seventh-string tight end in 2021, but will likely start at the fullback position in short-yardage and goal line packages.

Husbands comes to College Park as a 3-star recruit from Charles Herbert Flowers High School in Upper Marlboro, MD. He’s the only one of the four tight ends in Maryland’s 2021 recruiting class not to enroll early and participate in spring practices. 247Sports ranks him as the 65th-best tight end in the country.

I’ve projected Husbands to serve as the team’s eighth-string tight end in 2021. Listed at 6’3”, 207 lbs., he’ll have some bulking up to do during his expected redshirt season in order to compete for playing time next year.

Like Dyches, Brown transitioned from wide receiver to tight end during spring practices. He joined the team as a walk-on before the 2018 season, and his only game action came in the team’s season-opener against Howard in 2019.

I’ve projected Brown to serve as the team’s ninth-string tight end in 2021.