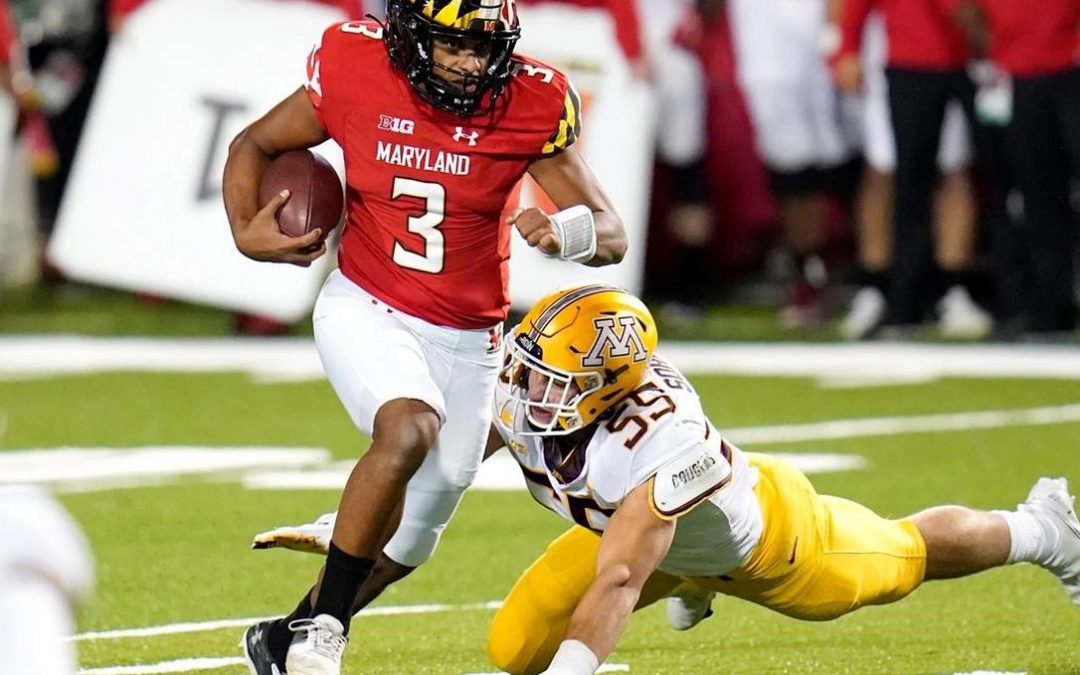 After a thrilling overtime victory against Minnesota last weekend, the Terrapins head north to Happy Valley to take on winless Penn State. This will be the 44th all-time meeting between the two schools, with Maryland’s most recent victory coming back in 2014. This will be a tall task for head coach Michael Locksley and his team, with the Nittany Lions favored by 25 points. But with the confidence gained from last week’s win, they’re hoping to pull off a stunner on Saturday afternoon.

James Franklin is in his seventh season as Penn State’s head coach, and will be looking for his team’s first win of the 2020 season after losses to Indiana and Ohio State. Sean Clifford returns as the Nittany Lions’ starting quarterback, but injuries to the team’s top two running backs have left much of the offensive burden to fall on his shoulders. Their defense didn’t play poorly against Indiana, but did allow Justin Fields and Ohio State to throw all over them.

Maryland’s offense looked like an entirely different unit last weekend than the one we saw in the team’s first game against Northwestern. Taulia Tagovailoa played like the quarterback everyone thought the Terrapins were getting when he transferred from Alabama, completing 74% of his passes for just under 400 yards and accounting for 5 total touchdowns. Jeshaun Jones and Dontay Demus, Jr. each had over 100 receiving yards, and Jake Funk added a whopping 221 yards on the ground.

After such strikingly different performances, it’s easy to wonder what to expect from Maryland offensively for the remainder of the 2020 season. With the defenses of Penn State and Ohio State looming over the course of the next two weeks, we should have a fairly good idea whether last weekend’s offensive explosion was a flash in the pan or not. No one is expecting the Terrapins to knock off the Nittany Lions or the Buckeyes, but they’ll need the offense to look much more similar to the one that showed up last week in order to keep things close.

While the offense improved mightily on their poor initial showing, defensive coordinator Jon Hoke’s unit looked just as porous against Minnesota as they did against Northwestern. The team’s run defense was particularly bad, allowing the Golden Gophers to average over 5 yards per carry and score 5 touchdowns on the ground. There was hope that some of the junior college additions to the defensive line would help to shore up some of the issues that plagued them last season, but that hasn’t happened thus far. While the Terrapins were able to overcome these problems last weekend, they’ll need to tighten things up if they want any chance to keep their games close against the blue blood programs in the conference.

Other than Tagovailoa, Funk was the most impressive player on the field for Maryland last weekend. He accounted for 243 total yards and two touchdowns, averaging over 10 yards per carry. It was a breakout performance for the redshirt senior who missed the majority of the last two seasons due to knee injuries. He’s always had the talent, rushing for 270 yards and 7 touchdowns in Damascus High School’s 2015 state championship game against Dundalk High School. For him to put together a performance like he did against Minnesota after the injuries he suffered over the course of the last two seasons is extremely impressive, and speaks to his impeccable resiliency and work ethic.

Despite Maryland’s defensive struggles, Campbell has put together two excellent performances so far this season. He’s already racked up 27 total tackles and recorded the team’s lone sack of 2020 last weekend along with 2.5 tackles behind the line of scrimmage. The MIKE linebacker position may well be the most important one in Hoke’s defense, and Campbell’s skill-set fits it perfectly.

5. How to Keep Things Close

While no one expects the Terrapins to knock off Penn State, it’d certainly be nice to see them finish closer than the 25-point spread would indicate. In order for this to happen, Hoke’s defense will need to put up a much better fight against the run than they have during the first two weeks. While that sounds unlikely, it’s important to remember that the Nittany Lions are without two of their best running backs due to injuries. Clifford is their leading rusher on the year, and just two of their touchdowns this season have come on the ground. If Maryland’s defensive line can avoid getting gashed too often up the middle, they may have a chance to keep this game close heading into the final quarter.