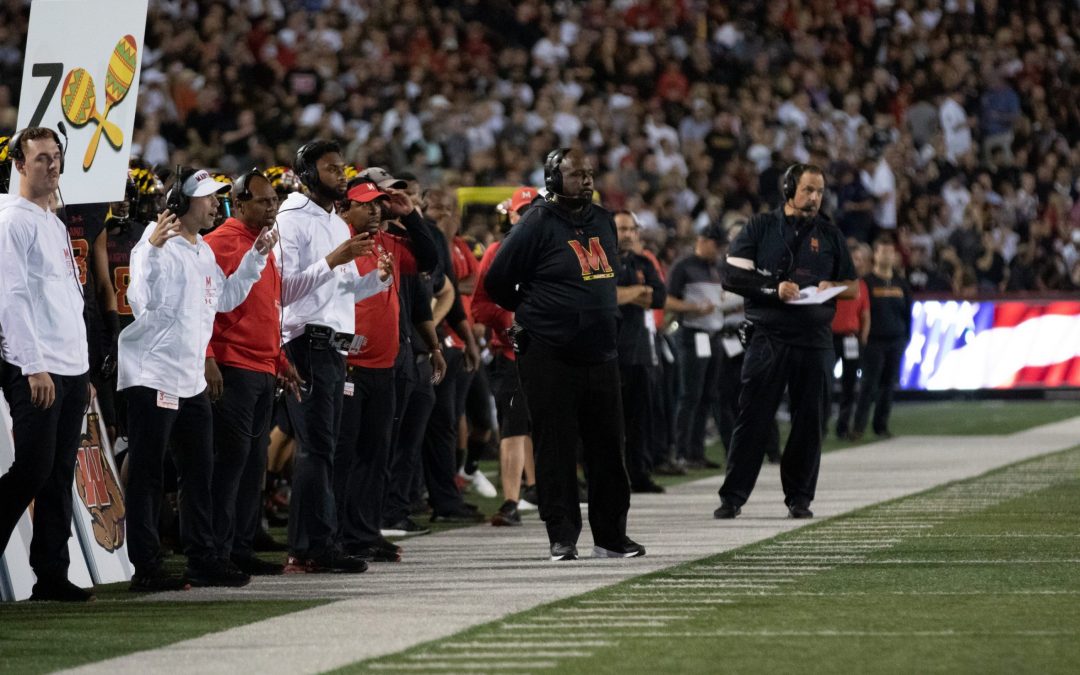 After preaching the importance of continuity during his first two years as Maryland’s head coach, Michael Locksley has made some changes to his coaching staff as his team prepares for the 2021 season. Some of these moves were made by choice, and some by necessity as some assistants took jobs elsewhere. Regardless, there will be some new (while not entirely unfamiliar) faces on the sideline for the Terrapins this year.

Scottie Montgomery was the first coach that Locksley dismissed during the off-season after he spent the previous two years as the Terrapins’ play-caller. He has since found a job as the running backs coach for the Indianapolis Colts, and Enos will take his place on Maryland’s coaching staff. He brings nearly 3 decades of coaching experience with him to College Park, including 5 years as a head coach, 9 as an offensive coordinator, and 17 as a quarterbacks coach. He served on Nick Saban’s coaching staff at Alabama with Locksley in 2018, and assisted with the development of Jalen Hurts, Mac Jones, and Tua Tagovailoa. He was the offensive coordinator and quarterbacks coach for Miami (FL) in 2019, and spent last season as Cincinnati’s associate head coach and running backs coach.

It was rumored that Locksley wanted to replace Montgomery with someone who had a stronger background in quarterback development, and Enos seems to fit that bill. With their franchise quarterback on the roster in Taulia Tagovailoa, the team is hoping that Enos can help him take the next step in his development. The offense shouldn’t change much schematically, as Locksley has designed this scheme himself and has a large influence on it.

After Jon Hoke left to become the defensive backs coach for the Atlanta Falcons, Locksley reconnected with Stewart and tabbed him as the team’s defensive play-caller. This will be a homecoming of sorts for the California native as he was Maryland’s defensive coordinator from 2012-2014 under Randy Edsall while Locksley was the team’s offensive coordinator. During that time, he quickly turned around what was a dismal unit in 2011 to one of the Atlantic Coast Conference’s best the next year. However, his first and only season in the Big Ten Conference went poorly, finishing as the 89th-ranked defense in the country.

Stewart originally comes from the Wade Phillips coaching tree, and runs a similar 3-4 scheme to the longtime NFL defensive coordinator. His defenses are known for being aggressive and blitz-heavy, something that Locksley has always had a preference for. It’s the same philosophy that Hoke had, so the personnel already on the roster is more than equipped to run Stewart’s system at a high level. Expect him to utilize plenty of single-high man coverages on the back end while blitzing frequently with the team’s stable of young pass-rushers and linebackers.

Zook is a name that should be familiar to anyone who’s been a football fan over the last quarter-century, and he’ll fill the void left by George Helow when he left to become the safeties coach for Michigan. He’s been on Maryland’s staff since 2019 as a Senior Analyst, and will now bring his special teams expertise to the forefront of Locksley’s coaching staff. 11 of his 40 years of coaching experience come as a special teams coach, including 8 in the NFL. Locksley was on his staff during both of his stints as a head coach at Florida and Illinois.

Burden fills the hole left by Joker Phillips when he left to become the wide receivers coach for N.C. State. He was most recently on the coaching staff at Virginia Tech from 2015-2019, and spent time at both Old Dominion and Richmond before that. For the last two years he’s worked with the G.A.M.E. Academy, a non-profit organization he founded that assists high school athletes as they work their way through the college recruitment process. He’s a strong recruiter himself with strong ties to the highly-coveted Tidewater area in the state of Virginia. Locksley is hoping that Burden’s presence on his coaching staff will allow Maryland to finally make inroads into this talent-rich area.

After John Reagan was dismissed from the coaching staff, Locksley turned to Braswell to fill a job that’s featured 5 different coaches in the last 6 years. He was already volunteering on the staff last season, so he has familiarity with the players on the roster. The majority of his coaching experience has come in the NFL, as he spent 5 years working for both the Cincinnati Bengals and Cleveland Browns. His only collegiate experience came from 2008-2013 when he was the offensive line coach and run game coordinator at Morehouse College. While Reagan was much beloved by his players, Braswell made a good impression on everyone last season and should bring a stronger recruiting ability to the position.

In addition to the new faces on the coaching staff, a few of the existing coaches have received changes to their titles. Defensive line coach Brian Williams has added co-defensive coordinator to his title following a recruiting cycle which saw him named as one of the best recruiters in the country. Tight ends coach Mike Miller will also serve as the passing game coordinator under Enos this season, and Brawley Evans will be moving from outside linebackers coach to inside linebackers coach.