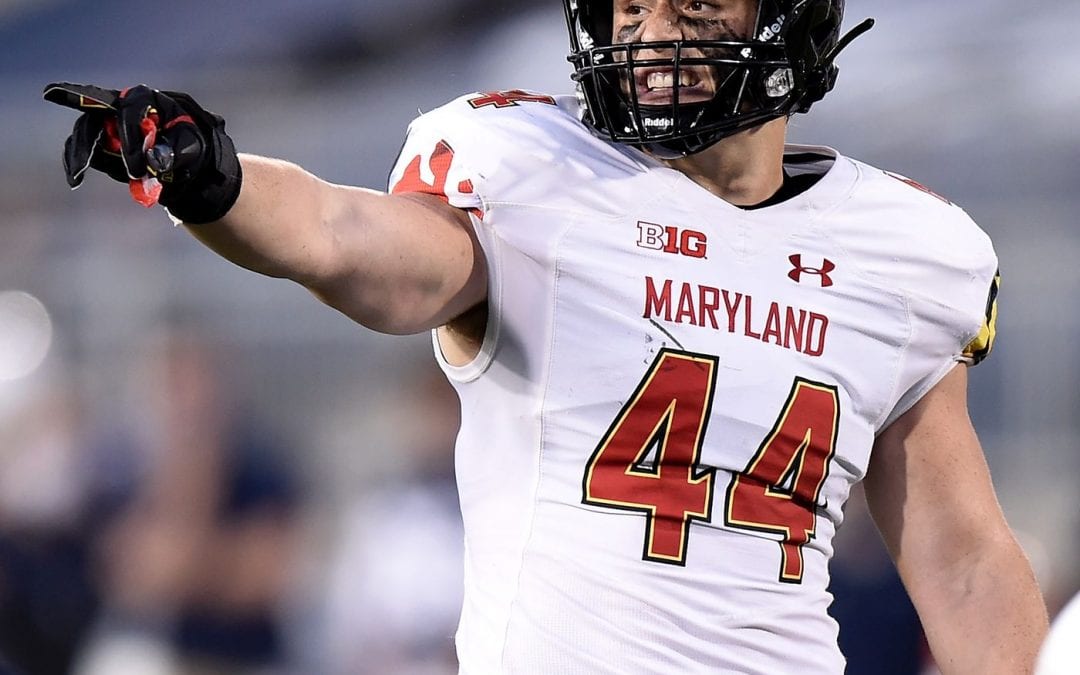 Continuing to add to its roster for the 2021 season, Maryland football bolstered its quarterback room Jan. 24 with a transfer commitment from Virginia Military Institute (VMI) signal caller Reece Udinski.

“…after some great conversations with Coach Locksley and Coach Enos, I have accepted an offer and am 100% committed to the University of Maryland,” Udisnki wrote in a social media post that announced his decision.

VMI is part of the Southern Conference, which elected to shift its 2020 season from fall to spring 2021. Udinski, who was named Southern Conference Preseason Offensive Player of the Year, also wrote in his commitment post that he still intends to play for VMI this spring and will transfer to Maryland after the spring semester. The 6-foot-4, 224-pounder will have one year of eligibility with the Terps.

The reason Udinski was named preseason offensive player of the year in his conference is because of his impressive 2019 campaign. Not only did he lead the SoCon in passing, he also set VMI single-season records for passing yards (3,276) and completion percentage (63.9%).

Udinski’s efficiency doesn’t end at his completion percentage. He also began the 2019 season with an FCS record 368 passes without an interception. The Pennsylvania native threw 19 touchdowns — good for second best in program history — on his way to being named Second Team All-SoCon.

Hailing from the PA-powerhouse high school football program North Penn, Udinski was named All-Area Player of the Year as a senior while leading his team to a 6A District 1 title with a 14-1 record. Losing only in the state championship game that year, Udinski was named First Team All-State by the Pennsylvania Football Writers Association and also won MVP of the Big 33 All-Star Game.

As only the second player in Pennsylvania high school football history to throw for more than 4,000 yards in a single season, Udinski was money on the gridiron. But he was a multi-sport athlete at North Penn who also excelled at basketball and lacrosse, which he holds multiple school records in.

Udinski comes at a great time because the Terps are going to need him. With Lance LeGendre recently transferring to Louisiana-Lafayette, Taulia Tagovailoa remains the only scholarship quarterback on Maryland’s roster.

Walk-on Eric Najarian played well in his limited action last season and could eventually earn a scholarship to round out the quarterback room, but with Udinski on board, there’s a good chance he could be next in line next year if something were to happen to Tagovailoa.

While adding Udinski can be chalked up as a win in the transfer market, Maryland took a hit in that same area a day later when junior linebacker Chance Campbell announced on Twitter Jan. 25 that he will be graduating early and enter the portal as a grad transfer this offseason.

This is a major loss for Maryland’s defense because Campbell was a tackling machine last season, averaging 11 tackles per game, which was good for 12th nationally and 2nd in the Big Ten.

Maryland is pretty loaded at linebacker, especially with a five-star coming in the current recruiting class, but Campbell was a leader on the defensive side of the ball and someone who cleaned up a lot of messes created by a suspect run defense.

“Being able to play for my hometown school the last three years has meant more to me than I’m able to put into words. I’ve cherished the privilege of donning the Maryland colors alongside some teammates who have truly become brothers. Maryland was the first school to believe in me and for that I’ll always be thankful. This University has given me so much, and I have tried to repay that debt every day through doing things right, working hard, playing harder, and treating people with respect and care. There have been some amazing people in every area of the building and I can only hope they know the impact they’ve had on me. After prayer, deep reflection, and some difficult conversations, I’ve decided that I will be entering the transfer portal. I’m proud to soon become a graduate this May and forever be a Terp. Thank you Terp Nation!”

Another QB to look out for…

Maryland may or may not be done adding quarterbacks to its 2021 class, but 2022 is a different story, as signal caller seems primed to be a position of major emphasis for that cycle.

Mike Locksley and his staff had already offered seven quarterbacks in the 2022 class but their most recent offer went to four-star Gordo (Ala.) gunslinger Tanner Bailey. Bailey is a highly sought after recruit who already has close to 20 offers.

He’s an SEC legacy as his father player at Auburn and his grandfather played at Alabama. (I know, weird, right?)

Bailey is a Rivals250 recruit and is expected to have an in-state lean with offers already from Alabama and Auburn. But roster spots are hard to come by in both places if you don’t pounce quickly, so there’s always an outside chance Maryland can sneak in and get a serious look.

Familiarity with multiple coaches on the Terps’ staff — the head coach and quarterbacks coach nonetheless — and seeing what Tagovailoa has been able to do in his short time at Maryland are all things that should work in Locksley’s favor.