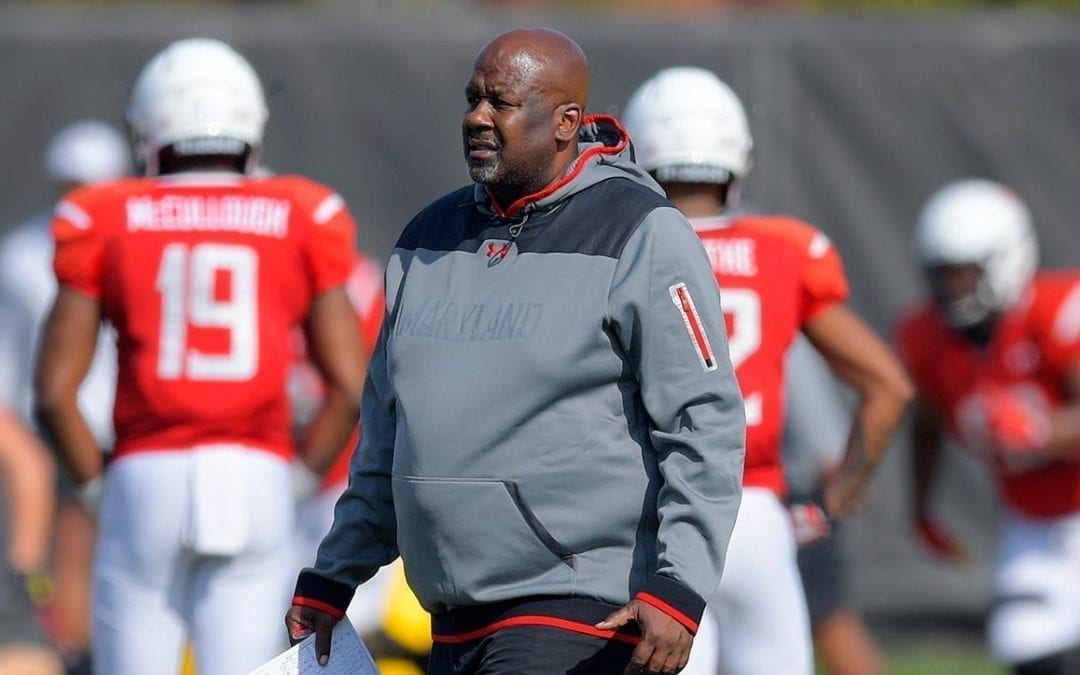 While Maryland head coach Michael Locksley spent his playing days and the first 4 years of his coaching career on the defensive side of the ball, his last 22 seasons have been primarily focused on offense. In his previous stops in College Park, he has been the team’s offensive coordinator, quarterbacks coach, and running backs coach. His most recent stint calling plays came in Tuscaloosa, where he helped lead Alabama to two straight College Football Playoff Championship berths. It’s the offense that he ran with the Crimson Tide that Locksley will bring to Maryland, and while he won’t be calling every play, his fingerprints will be all over the team’s offensive gameplans every week.

Like most offenses in college football today, Locksley’s can’t be pigeon-holed into one definition. In short, it’s a multiple spread attack which uses tempo and motion to keep defenses guessing. The quarterback will spend the majority of his time in pistol or shotgun formations, and the passing game is of a quick, west-coast variety. There will also be plenty of modern elements such as run-pass options (RPOs). While the offense is built around the passing game, a strong downhill rushing attack plays a very important role.

Locksley’s scheme thrust Alabama quarterback Tua Tagovailoa into the Heisman Trophy conversation in just his sophomore season, as he threw for just under 4,000 yards and boasted a mind-boggling 43:6 touchdown-to-interception ratio. The running game was a by-comittee approach, with three different backs receiving over 100 carries. While none of them racked up over 1,000 yards they all played a key role in the team’s schematic approach.

In this article, I’ll break down the most important elements of Locksley’s offensive scheme based on what he ran at Alabama last season in order to demonstrate what to expect from the Terrapins when they have the ball in 2019.

I watched Alabama’s offense in both the SEC Championship and the College Football Playoff Championship in order to get a picture of Locksley’s offensive scheme. While like most college football fans I watched plenty of Crimson Tide football in 2018, this allowed me to dig deeper into his play-calling style. Below is a breakdown of the 140 snaps that I watched in those two games.

As you can see, Locksley uses 11 personnel (1 RB, 1 TE, 3 WR) over 60% of the time in his offense. He’ll use many different formations within this personnel grouping, and moves his tight end all over the place. He’ll also run the Wildcat out of 11 personnel.

To switch things up, he’ll also utilize 12 personnel (1 RB, 2 TE, 2 WR) and 20 personnel (2 RB, 0 TE, 3 WR). Like in 11 personnel, he’ll move his tight ends around a lot when he has two of them on the field. He also liked to put multiple running backs on the field at the same time, and used plenty of motion to keep defenders on their heels.

22 personnel (2 RB, 2 TE, 1 WR) was primarily used as a short-yardage wildcat grouping, with one of his running backs taking a direct snap. His goal line personnel typically featured 1 running back, 2-3 tight ends, and a few additional offensive linemen. On rare occasions, he’ll come out in 10 personnel (1 RB, 0 TE, 4 WR).

Between Alabama’s use of shotgun, pistol, and wildcat formations, their quarterbacks were under center less than 7% of the time in the two games that I charted; and each of those times came at or very near the goal line.

Like most college offenses today (and a growing number of professional ones), Locksley’s quarterbacks will rarely leave the shotgun. He’ll sprinkle in some pistol formations when he wants to give a defense’s front seven a different look, but his teams’ base offense is from the shotgun in 11 personnel. Using simple personnel groupings and formations gives his players less to think about, while still retaining the ability to window dress his plays in many different ways.

Gone are the days of Nick Saban coached teams building their offenses around bellcow running backs and game-manager quarterbacks. While signal callers like Greg McElroy and AJ McCarron had immense success in Tuscaloosa handing the ball off to running backs like Mark Ingram and Eddie Lacy, Saban ushered in a new era of Crimson Tide football when he hired Lane Kiffin as his offensive coordinator in 2014. After years of resisting the modern, spread, up-tempo offenses seen elsewhere across the country, he turned Bryant-Denny Stadium into a fun place to watch offensive football.

Take a look at this sampling of Alabama’s offenses and their run/pass ratios under four different offensive coordinators during Saban’s tenure:

As you can see, what had been an offense that ran the ball nearly two-thirds of the time has gradually morphed into a very balanced system. While Kiffin began the revolution in Tuscaloosa, Locksley took it to new heights. With Saban fully on board with modern offensive ideas, Locksley had free reign to install his own up-tempo spread system.

Locksley is a bit unique as a play-caller in that he uses what he calls a “touch chart”. This chart ensures that the ball is spread around to his playmakers. He has a certain number of times that he wants his best players getting the ball in each game, and believes that getting them their touches will ultimately lead to the most possible points being scored for his team. He utilized a similar chart when he was Maryland’s offensive coordinator from 2012-2015, ensuring that star wide receiver Stefon Diggs was making the most of his playmaking abilities.

When I charted both of Alabama’s championship games, one thing that stood out was how much misdirection was used in their running game. Alongside the classic zone and power runs, the counter was used with great regularity. Jet sweeps were also used a lot, both as decoys and ways to get receivers and running backs the ball in space. Locksley’s offense, not unlike former interim head coach Matt Canada’s, will test a defense’s eye discipline to the fullest extent.

At the end of the day however, this offense is built around the passing game. Specifically, the most prevalent type of throws Locksley asks his quarterbacks to make are of the high-percentage variety. This means that screens, slants, quick outs, and crossing routes are the most common passes you’ll see from his offense. The primary goal is to get the ball out quickly in order to give your playmakers the ability to go to work in space. Most of the shots taken downfield are built off of play-action, again to test the eye discipline of opposing defenses.