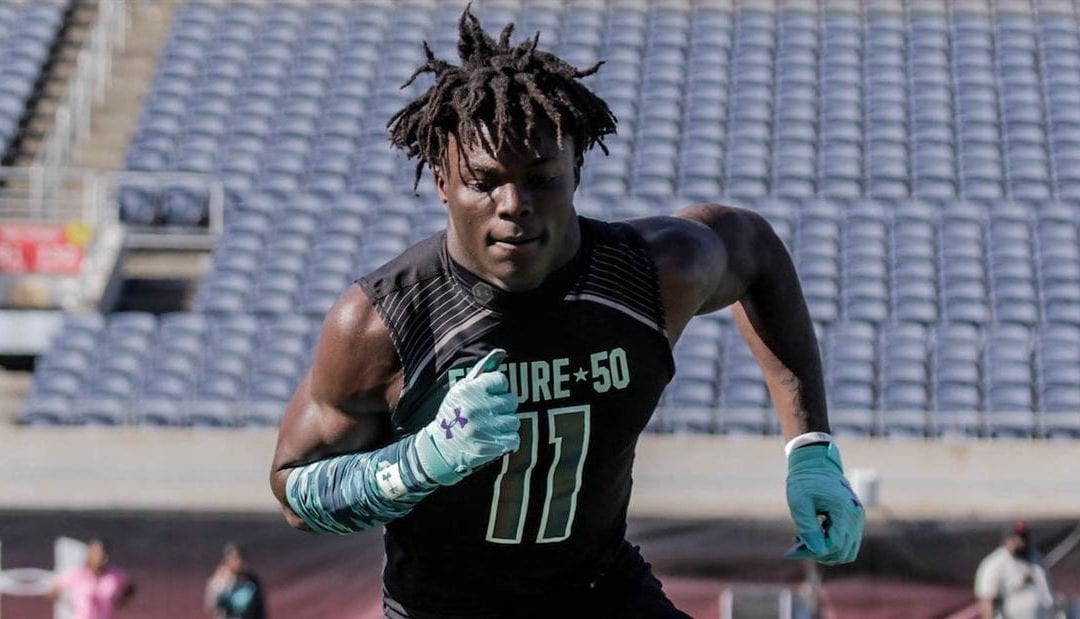 Maryland head coach Mike Locksley locked up the majority of his 2021 recruiting class about a month ago when letters of intent were submitted during the Early Signing Period.

But early signing day included a big surprise for the Terps, and a few weeks later their 2021 class received an even bigger boost — both of which hail from The Sunshine State.

First it was Jacksonville (Fla.) Sandalwood four-star linebacker Branden Jennings, who committed to Michigan back in October but decided to flip to the Terps on signing day. Before pledging to the Wolverines, Jennings originally committed to Florida State. He was committed to the in-state program for about seven months.

At 6-foot-3, 235-pounds, Jennings is a big, physical, and versatile linebacker who can play on the inside or outside. He is known for his bone-rattling hits and will be a welcomed addition to a Maryland defense that is getting a big boost from the 2021 recruiting class.

But Locksley wasn’t done dipping into the Florida well after Jennings. A little more than two weeks later, he outdid himself by landing Miami Central (Fla.) four-star linebacker Terrence Lewis.

Lewis, who narrowed down his choices to Maryland and hometown Miami, chose the Terps on national television during the All-American Bowl Declaration Day special.

Before committing to the Terps, Lewis pledged to two different SEC programs. He committed to Florida in January 2019, but he then decommitted and went with Tennessee back in April. That lasted until Nov. 30 when he decommitted from the Vols.

Locksley and his recruiting prowess certainly played a large role in landing Lewis, but it was fellow Miami native and Terps defensive line coach, Brian Williams, who led the charge in recruiting the blue-chip linebacker.

Lews is a decorated high school athlete. The 6-foot-1, 200-pounder was selected for the 2021 All-American Bowl and won three straight state championships between his time at Miami Northwestern High School and Miami Central High School.

Both Jennings and Lewis are Rivals100 recruits with Jennings ranking 83rd in the class and Lewis 32nd. With Lewis putting pen to paper, he becomes the highest-rated defensive recruit Maryland has landed in the Mike Locksley era. Landing the duo of Sunshine State standouts also marks the first time Maryland has landed a pair of high school Rivals100 prospects in the same class since Ralph Friedgen received commitments from Wesley Jefferson and Vernon Davis back in 2003.

Lewis intends to be one of eight members of the 2021 class to enroll early and take part in spring practice with the Terps.

With the additions of Jennings and Lewis, Maryland now has five recruits from Florida in its 2021 class. And Locksley & Co. might not be done recruiting the talent-rich area yet.

Maryland was in good position with Jacksonville (Fla.) Bishop Kenny center Michael Myslinski before he committed to Texas in August, but the three-star blocker decommitted from the Longhorns less than a week before the Early Signing Period and is now giving the Terps a second look.

Myslinski recently told Chad Simmons of Rivals.com that Iowa, Maryland, and Michigan State continued to recruit him even after he committed to Texas and those are the three schools he will now choose between.

“It is good to be in this place with three schools, but at the same time, it is a hard problem to have because I am not sure which one is the right one,” Myslinski told Rivals. “I can see myself at all three schools, so I am struggling some to make a decision, but I think I will be ready here soon. I am not totally sure yet, but I am getting closer.”

Myslinski’s lead recruiter from Maryland, George Helow, is the older brother of Myslinski’s best friend so the Terps have some strong ties in their advantage. But the 6-foot-3, 290-pound center also has personal ties to the Spartans and Hawkeyes.

Landing Myslinski would be a huge get for Maryland, which just lost its starting center, Johnny Jordan, to the transfer portal.

Adding to what looks like it will be one of the most talented Maryland rosters in quite some time entering the 2021 season, the Terps also recently bolstered a position group that was already strong by adding a transfer wide receiver to the mix.

Former Nebraska wideout Marcus Fleming announced over the holidays that he has transferred to Maryland. A Florida native who is a former four-star recruit out of Miami (Fla.) Northwestern, Fleming joins an explosive Terps receiving corps that already includes the likes of Dontay Demus and Rakim Jarrett.

Fleming was originally committed to the Miami Hurricanes before signing with Nebraska last year. At 5-foot-10, 170-pounds, he is best after the catch and showed off his receiving skills as a freshman with five catches for 75 yards in the Cornhuskers’ loss to Northwestern this season.

Many of these new additions, as well as several other members of the 2021 recruiting class, appear poised to make an immediate impact in College Park.

Jennings and Lewis will join a defensive front seven at Maryland that on paper looks to be as ferocious as any in the country. In fact, the Terps’ eight highest-rated recruits in this year’s class, which currently ranks 20th nationally according to Rivals, are on the defensive side of the ball with almost all of them playing in the box.

With this influx of defensive talent joining incumbent standouts Nick Cross, Chance Campbell, Ruben Hyppolite, and Tarheeb Still in College Park, the Terps could find themselves with an emerging high quality defense next season.