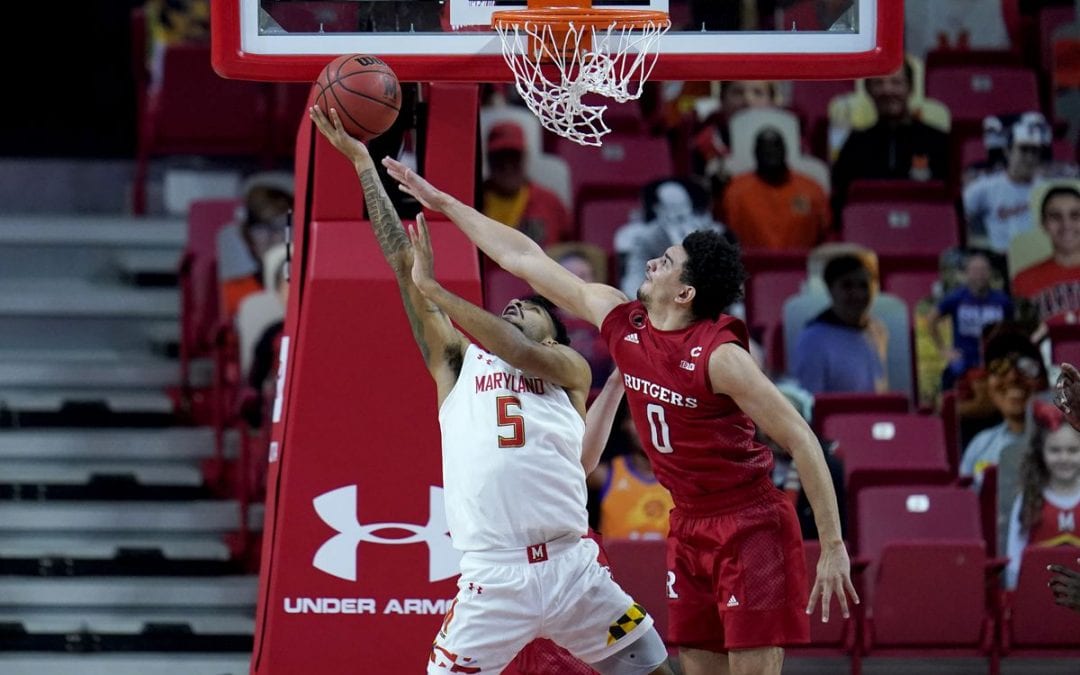 Entering this season, many knew that the biggest question for Maryland to answer was how would they account for the loss of Anthony Cowan Jr. and Jalen Smith on the offensive end of the floor. While those departures freed up scoring opportunities for the likes of Eric Ayala, Darryl Morsell and Aaron Wiggins, would those players be able to step forward and take advantage? After Maryland’s two toughest games of the season to date, both losses, it’s fair to say that the jury is still out in that regard.

After getting overwhelmed in a rough loss at Clemson, Mark Turgeon’s team put forth a better response during the first half of Monday’s game vs. Rutgers in the Big Ten opener for both teams. But even with the improved effort, the Terps managed to score just 28 points in the first half and took a one-point lead into the break. While Maryland wasn’t much better offensively in the second half the Scarlet Knights were, and the end result was a 74-60 win for the visitors.

The difference was that Rutgers had multiple players capable of getting a basket, while Maryland essentially had just two: Ayala and Donta Scott, who continues to impress through the team’s first six games.

Scott tallied 20 points, his fifth game this season in double figures. By comparison, the sophomore forward hit double figures in six games all of last season. Scott’s shooting better than 71 percent from the field with an average of just 6.5 field goal attempts per game, and he’s also managed to make better than 61 percent of his three-point attempts, averaging 13.0 points per game to go along with 7.2 rebounds and 1.0 blocks. While the last two games have been disappointing when it comes to the results, Scott has continued to look like one of the Big Ten’s most improved players.

Ayala has also gotten off to a solid start, averaging a team-high 13.2 points per game while also accounting for 2.7 rebounds, 2.7 assists and 1.3 steals per. He’s shooting just under 52 percent from the field for the season. Monday’s effort wasn’t a good one from him, as he shot 3-of-11 from the field and had just one assist, but the junior guard didn’t turn the ball over and still scored 12 points. Could Ayala have been better? No doubt. But, Maryland is going to have a hard time winning in the Big Ten if they don’t get more production out of Morsell and Wiggins, regardless of what Ayala brings to the table.

The two upperclassmen combined to score 12 points on the night, shooting 6-of-21 from the field. Wiggins got off to a solid start this season, hitting double figures in each of Maryland’s first three games. But as the level of competition has been raised his production has dipped, with Monday’s effort being the third straight in which he scored six points or less. Morsell, whose contributions as a defender and leader can’t be glossed over, is on a similar scoring drought.

While last year’s team had two bonafide scorers capable of bailing Maryland out, this group doesn’t have that luxury. Which means that more will be needed from Wiggins and Morsell if the Terps are to stay above water in the Big Ten.

If there was anything else to take from Monday’s game besides the offensive struggles, it was the fact that Turgeon cut his rotation down to seven players. Nine saw action, but Aquan Smart was limited to nine minutes and Chol Marial two. And the tough thing for those two underclassmen is that Maryland has just one non-conference game remaining on its current schedule, December 22 vs. La Salle. Meaning that there aren’t many opportunities for them to show in-game that they deserve rotation minutes for the Terps dive back into Big Ten play.

So what can be expected from either at this point? Smart appears to be locked in that 9-13 minutes per game range, primarily to give Ayala a break with there being the occasional stints in which they share the court together.

As for Marial, the limited offseason appears to have done him no favors when it comes to earning more minutes. Galin Smith and Jairus Hamilton have handled the majority of the minutes at the center position, and while they are first-year Terps their overall experience gives them a decided advantage over the sophomore. And with the emergence of Scott and Hakim Hart, who’s averaging just over ten points per game, Maryland can afford to go small. That essentially leaves Marial as the odd man out for the time being.

As noted above Maryland has one more non-conference game to play before it visits Purdue on Christmas Day. Hopefully the matchup with La Salle produces a better offensive performance than the one that we saw Monday night, because that isn’t going to cut it on most nights once Big Ten play resumes.