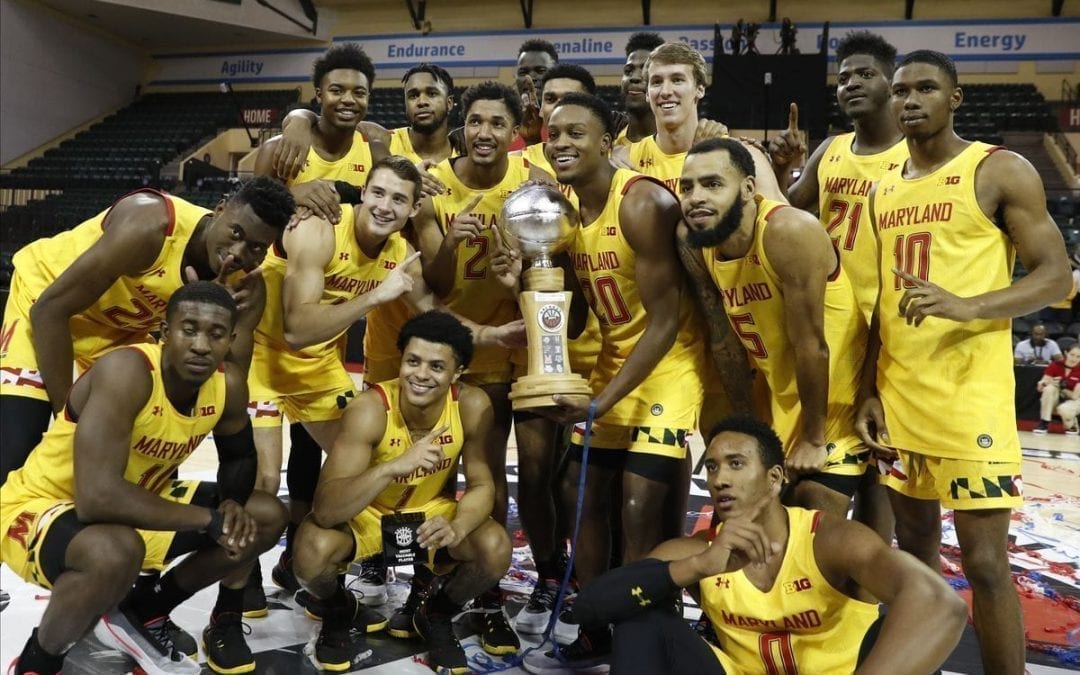 After several disappointing regular seasons and a few early postseason exits under Mark Turgeon’s belt in his previous eight years as head coach at Maryland, it’s understandable that Terps fans would be reluctant to overreact to any type of early-season success.

But don’t look now; with the pressure of a top-five ranking already present, Maryland is still unbeaten through the first month of the season and just quieted a red-hot Marquette team Dec. 1 by handing the Golden Eagles a 21-point loss in the finals of the Orlando Invitational.

The impressive performance in its last outing has given Maryland its first 8-0 start of the Turgeon era and first since the 2006-07 season, as well as vaulted the Terps even higher in the polls — now up to No. 3 in the latest Associated Press Top 25.

True skeptics are likely waiting to see how the Terps — who now have an even bigger target on their back — fare this week once they return home and host Notre Dame in the ACC-Big Ten Challenge Dec. 4, followed by their Big Ten opener against Illinois Dec. 7 in College Park.

However, the Terps showed the killer instinct you’d like to see out of a highly ranked team on Sunday against a Marquette squad coming off three straight wins and led by the nation’s leading scorer, Markus Howard — who was held to six points on 1-for-12 shooting.

It was the type of win on national television (ESPN) that should have even the most hesitant Maryland fans, as well as national analysts, taking notice and one that paints the Terps as true national title contenders this season.

Breaking down why No. 3 Maryland has a legitimate shot to be cutting down nets to end the season, here is what has stood out about the Terps through their first eight games:

Maryland only has one senior scholarship player on the roster and that’s senior point guard Anthony Cowan Jr., who is having a stellar season so far and was named tournament MVP at the conclusion of the Orlando Invitational.

Cowan started the season showing how he has matured as a leader and distributor, dishing out five or more assists in each of Maryland’s first four games. He has continued to find open teammates, but Cowan’s scoring has skyrocketed recently. After averaging 13 points per game through the Terps’ first five games this year, Cowan ramped it up down in Orlando and scored 72 combined points between three outings, including a career-high 30 in the quarterfinals against Temple.

Great guard play is essential to winning in the postseason, and very few guards in the country, if any, are playing better than Cowan right now.

Perhaps what’s helping Cowan the most this season is having a reliable second point guard to back him up. Terps’ sophomore Eric Ayala added more athleticism to his game this offseason by changing his diet and shedding about 10 unneeded pounds.

His ability to come off the bench to spell Cowan as the primary ball-handler or play alongside him and let the senior shift to more of a scoring role makes Ayala one of Maryland’s most important pieces.

The sophomore has started two games for the Terps so far this season, including the blowout over Marquette, but his normal role for Maryland is coming off the bench as a steady guard. He’s currently averaging 10.9 points, 2.4 rebounds, and 2.0 assists per game for the Terps this year. Having two reliable point guards come tournament time will make Maryland a tough out for anyone.

He isn’t the flashiest player, but the argument can be made that Terps’ junior guard Darryl Morsell is Maryland’s best all-around player. Morsell is an athletic spark on offense and a gamechanger on defense.

In the 21-point win over Marquette, Morsell recorded his second consecutive double-double and second of the season by scoring 17 points and rippings down 10 boards. But it was his ability to shut down the nation’s leading scorer, Markus Howard, that proved to be the biggest difference-maker for the Terps. Morsell helped hold Howard to just six points on 1-for-12 from the field and 0-for-6 from three.

In 25.5 minutes per game through eight games this season, Morsell is averaging 9.0 points, 6.1 rebounds, 1.9 assists, 0.9 steals, and 0.5 blocks per game for Maryland. As the only Terp averaging at least 45 percent shooting from the field, 75 percent from the free-throw line, and 35 percent from three this season, Morsell is a true glue guy by every definition of the term. Having a player like Morsell is essential to any championship team.

Entering the season, every Terps fan knew that the evolution of sophomore wing Aaron Wiggins’ game would be one of the biggest keys to Maryland’s success this year. With the out-of-conference schedule near its conclusion and Big Ten play looming, Wiggins has shown immense growth on both ends of the floor.

The 6-foot-6, 200-pound guard has started every game for the Terps this season and is averaging 10.8 points, 5.6 rebounds, 1.8 steals, and 0.6 blocks for Maryland. His biggest impact has come when Maryland switches to a zone defense and he is leading the Terps with 14 steals. But Wiggins has also provided value as a deep shooter, hitting the second most threes on the team (14) thus far.

Wiggins’ defense and ability to play passing lanes is essential to the Terps getting out and scoring in transition. His knack for hitting outside shots also makes Maryland a dangerous halfcourt team.

Preseason All-American Jalen ‘Stix’ Smith is having a strong season so far for Maryland. The Baltimore native already has four double-doubles this year and is averaging 13.4 points, 9.0 rebounds, and 2.0 blocks per game this season while shooting 50 percent.

His outside shot is there but it has been slow to come around so far this season. Once Smith starts knocking down more shots, his matchup nightmare for opposing teams will really start to show. But Smith is currently making life hard on teams trying to stop the Terps. He can play the five in smaller lineups and bang down low with the best of them or shift to the four and give Maryland spacing that’s hard to combat.

Maryland’s newfound depth down low this season gives Turgeon the ability to leverage Smith’s versatility, and that should only improve as freshmen bigs Makhi and Makhel Mitchell, Donta Scott, and sophomore Ricky Lindo Jr. continue to evolve as players. The amount of big bodies Turgeon has at his disposal allows the Terps to play free and aggressive in the post without having to worry too much about foul trouble.

What it all means…

Turgeon is operating with his deepest and perhaps most talented roster he has had in nine seasons in College Park. A nice blend of size, athleticism, leadership, and toughness has Maryland looking like a dangerous team and well-deserving of its top-3 ranking. The influx of talent in College Park has coincided with Turgeon seemingly turning a corner as a coach. Hesitant in the past to let his teams play zone defense or get out and run, that has certainly not been the case with this year’s Terps team. It appears Turgeon has a clear view of what he has to work with this season and doesn’t intend on letting his team’s talent go to waste.