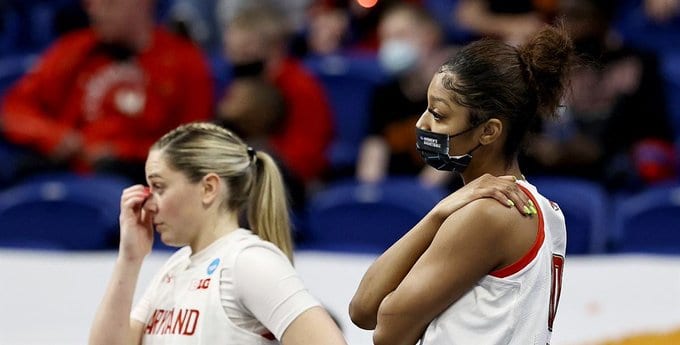 In the wake of her team’s stunning ouster from the NCAA women’s basketball tournament, Maryland coach Brenda Frese posted a photo of the players, all smiling on the Alamodome court in San Antonio.

It’s a decidedly odd pose, given that the No.2 seeded Terps had just suffered a season-ending loss to Texas on the doorstep of what might have been a run to the program’s second national title.

It might be a preview of a future photo, say at next year’s Final Four site, Minneapolis’ Target Center, since Maryland may return its entire team with a roster that won 15 straight games – all by double digits – before things came crashing down in a 64-61 shocker Monday.

The Terps, who won the Big Ten regular season and tournament titles, should start the 2021-22 season as a national championship contender, but will need some tweaks in their formula to get there.

Specifically, Maryland will get to Minnesota next spring if:

In addition, though Maryland stormed through the first two rounds of the NCAA tournament, they had precious little experience in playing in close games this season.

The Terps had played in just one game decided by five points or less since mid-January, a two-point road loss to Ohio State. In key moments Monday, the team’s youth and inexperience reared their ugly head at the worst possible time.

“This is the first time that they’ve had the big lights on them for a lot of our team,” said senior Chloe Bibby, a transfer from Mississippi State. “Now, they’ve had a little bit of taste of it. I think we’re gonna want to go further.”

The Terpscould desperately use a road game in a hostile environment, say at Connecticut or South Carolina or Baylor or even Stanford. Even a tough loss in November in one or more of those places could pay big dividends in March and April.

The core of the Maryland attack – sophomores Ashley Owusu and Diamond Miller and freshman Angel Reese – will have a year of maturity under their belts.

Owusu, a combo guard and Miller, who emerged as a budding star, are likely to land on preseason All-America or National Player of the Year watch lists, while Reese, the No.2 rated recruit in the nation from St. Frances, is a star in the making, though she’ll need to develop a better perimeter game.

Add that trio to sophomores Mimi Collins and Faith Masonius and an incoming freshman class rated ninth overall and Frese will have a solid nucleus. The question will be what else will she have.

Bibby, an Australian native, guard Katie Benzan, who led the nation in three-point shooting and reserve Alaysia Styles – all transfers – are all either seniors or grad students. They would normally be leaving the program, except that the NCAA has granted athletes an extra year of eligibility because of COVID-19.

All may decide to try their hands at professional careers, though Frese said Monday she hopes they all return. If they do, Maryland’s quality of depth will match anyone in the game.