The 2021 NBA Playoffs Makes Its First Call to Cancun 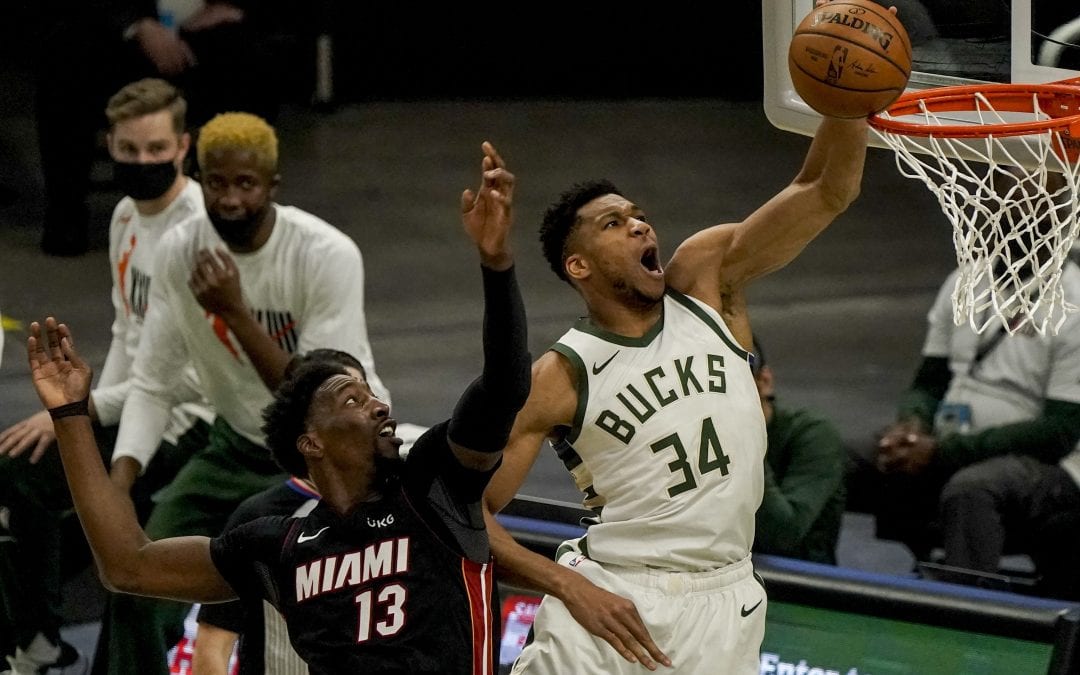 The first round of the NBA Playoffs has been filled with career performances, big buckets and interesting storylines continue to develop with every game that passes.

But unfortunately, not every team is going to be able to move on to the next round and keep their championship hopes alive. There is one team in particular that has already either watched their postseason dreams come to an end and will soon be booking their first flights for an offseason vacation. That team is the Miami Heat.

Yesterday Miami punched their ticket to Cancun via a clean four-game sweep after losing to the Bucks 120-103. This is just the first of many that watch their Playoff hopes whither in the wind and with that, we have to look ahead to the Heat’s offseason plans.

In this article we will start by taking a look at what went wrong for Miami in their series against the Milwaukee Bucks. Then we will take a look at what they have going on this offseason and what their biggest offseason goal should be to prepare for a better season in 2022.

With that being said, let’s take a deep dive into Cancun’s first NBA Playoff vacationer, the Miami Heat.

Miami Heat Got Bullied by the Milwaukee Bucks in Postseason Rematch

Brewing from the collapse of the Milwaukee Bucks in the Eastern Conference semi-finals last year in the bubble, this much anticipated first round matchup had a little bit of vitriol behind it.

Last year in the Bubble, the Miami Heat played spoiler to Giannis Antetokounmpo’s MVP season and inflicted heavy media criticism on the coaching of Mike Budenholzer. Not to mention they took away the closest chance the Bucks redeeming themselves from the collapse to the Toronto Raptors the season before.

So, for Milwaukee this series is more than just another 2 vs. 7 seed in the Eastern Conference. This was personal and you could tell through the way the Bucks dismantled the Heat in a different way from Game 1 to Game 4 yesterday.

In Game 1, Miami dominated in the three-point shooting department going 20-of-50 to Milwaukee’s 5-of-31 performance. But the Bucks dominated the paint by outscoring Miami down low 56-24. Along with Khris Middleton hitting the most crucial three of either team as time expired to win the game 109-107.

Then in Game 2, Milwaukee gave the Heat a dose of their own medicine. Led by Bryn Forbes and Pat Connaughton who combined to shoot 11-of-18 from beyond the arc, the Bucks went on to outshoot Miami with 22 threes to the Heat’s eight.

The Bucks did also follow some of the game plan from Game 1 as they won the rebounding battle 61 to 36 and Miami allowed Milwaukee to grab 21 offensive rebounds. So inside and out, the Miami Heat were outclassed, and it led to getting blown out by 34.

By Games 3 and 4, Miami had been completely taken out of the series and ended up getting cleared out quickly.

In Game 3 they could not even muster up 90 points. Also, no other player scored double figures besides Jimmy Butler, Bam Adebayo and oddly enough Nemanja Bjelica gave them 14 in 18 minutes off the bench. By Game 4 it was too late to recover as four Bucks’ players scored at least 20 points while Adebayo was the only Miami player to crack 20 points. Giannis Antetokounmpo was one of those four Bucks’ players and he also managed to notch his first career playoff triple-double with 20 points, 12 rebounds and 15 assists.

To put it simply: The Milwaukee Bucks had Miami’s number. Any way that you could lose a game or a series, the Heat did it. Milwaukee was more physical than them. They outshot them from three. Then they out-talented them with the trio of Antetokounmpo, Middleton and Jrue at the helm in the final two games to seal the Heat’s fate.

The crazy part about this is that if you remember, it was the Heat’s mental toughness, physical play and crazy hot shooting from the outside that carried them to the NBA Finals last season. So, in other words, it looks like the Milwaukee Bucks Out-Heat the Miami Heat.

Now they have to go back to the drawing board to prepare for next season. But they might also need to take the offseason to rediscover the identity of this Heat organization moving forward.

Looking Ahead for the Miami Heat

When looking at the Miami Heat’s 2021 offseason, there are three primary things that they need to take into consideration.

The first thing is that they do not have any draft capital to grab some ascending talent in this year’s NBA draft. They would have had the 18th pick and the 48th pick but due to past trades, those picks now belong to the Oklahoma City Thunder (18th) and the Atlanta Hawks (48th) respectively.

So, this team will not have the luxury of potentially finding another late-first round steal like how they did with Tyler Herro. They could be active in undrafted free agency though as this will be a deep draft class that could have some diamonds in the ruff not get their name called on Draft night.

The second thing to note is that they have a few key guys that could be coming off their books this offseason.

Victor Oladipo is one of them. He is someone they traded for from the Houston Rockets and he looks like he could miss all of next season due to a right quadricep injury.

Other notable potential free agents from the Heat include Kendrick Nunn and Goran Dragic who they have a team-option. Duncan Robinson is going to become a restricted free agent and could be one of the hottest commodities in free agency if he hits the market. Not to mention Mr. Miami himself,  Udonis Haslem, who has been a member of the organization since being drafted by the Heat in 2002.

If they plan on getting better by pursuing a top-flight free agent this offseason, they will more than likely have to let at least two if not three of these guys walk.

Speaking of top-flight free agents, that brings me to their third most important thing of the offseason. The Miami Heat need to prioritize acquiring another playmaking ball handler to put next to Jimmy Butler in the backcourt.

As seen in these playoffs and even last season in the Bubble, Miami had to rely heavily on 35-year-old Goran Dragic to create offense for them when Butler was struggling or just simply off the floor.

Tyler Herro has regressed a bit in Year 2, and it is more than likely that they will let Nunn walk in hopes of upgrading at the position. Then considering Oladipo is injured and did not have a great audition for the Heat, only playing four games in Miami, he seems out of the mix as well.

Some options that come to mind for the Heat to pursue are Toronto Raptors’ Kyle Lowry, Brooklyn Nets’ Spencer Dinwiddie or maybe even Los Angeles Lakers guard Dennis Schroder.

One other wild card is Phoenix Suns guard Chris Paul who has a player option and could leave Phoenix to pursue a championship from the East side of the Playoff bracket. There is a high probability that Paul will accept his player option for $44.2 million, but you never know. He has to consider that is 36 and is quickly running out of time to make a potential NBA Finals run.

Regardless of who they pursue, they desperately need someone in the backcourt that they can turn to give them instant offense outside of Jimmy Butler. Also outside of maybe Dennis Schroder, the other three guys I listed are all real threats to shoot the three. This actually is more than necessary considering Butler lives in the midrange area which swings left of where the league is heading nowadays.

If Miami is going to be a real threat to teams like the Brooklyn Nets, Philadelphia 76ers or the Milwaukee Bucks, they are going to have to create a Big 3 to really go toe-to-toe with those three teams at the top.

The Heat have arguably one of if not one of the best coaches in the NBA in Eric Spoelstra. They have a championship caliber front office led by Pat Riley. Then to top it off, they have a franchise leader in Jimmy Butler.

So, with that being said the Miami Heat are more than capable of returning back to the top of the mountain. But this offseason they have some serious foundational holes to address if they are looking to be true contenders by as early as next season.