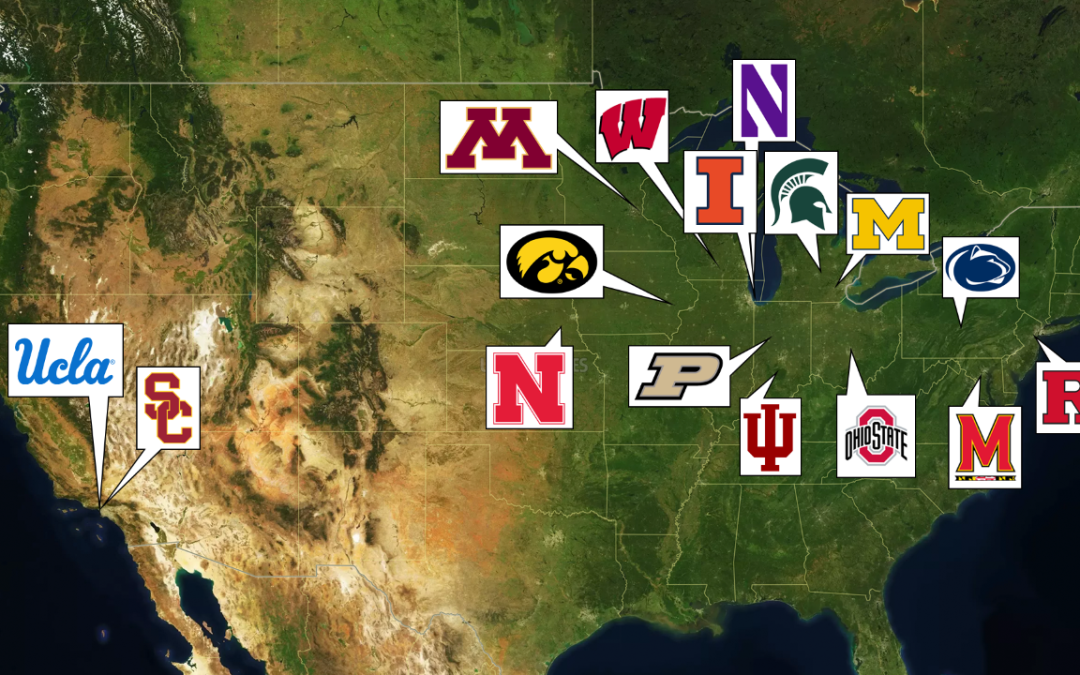 June 30, 2022 was one of the wildest days in college football history, despite not a single game being played. In all my years of following and covering the sport, and more specifically conference realignment, I cannot recall an instance where the news dropped that two big-time schools were changing conferences, and then it actually became official, all in a single day. That’s what happened when it broke late in the morning that USC and UCLA were applying for membership to the Big Ten, and that very evening the Big Ten presidents unanimously voted to admit both schools in August of 2024.

This move was both jarring and yet easy to see coming. It mirrored a similar move made a year ago when Texas and Oklahoma announced they would leave the Big 12 for the SEC. The Big 12 is in a similar situation as the Pac-12; falling behind the Big Ten and SEC in both revenues and prestige, with no obvious path to close the gap. I read a lot of commentary that the Big Ten and SEC “poached” these new additions. I think that inaccurately states what happened. In both cases, the departing schools reached out first and indicated they wanted out of a situation they thought was untenable. Both sets of schools said they were leaving no matter what, and if one of the Power Two (more on that later) didn’t want them, the other one would. It was a no-brainer decision for the conferences to welcome four of the biggest brand names in college sports.

This move obviously has a tremendous impact on both the present and future of the Big Ten Conference. Going with what I know, have read from reliable sources, and my own gut feeling, here is how I think this impacts both the near term (meaning how things immediately change once USC/UCLA join) and beyond.

The new members will join in time for the 2024 football season. The Big Ten had already been discussing making significant changes to its football scheduling and divisional format, possibly beginning in 2023. Now, it would seem likely that the current East/West divisional format will remain through the 2023 season and they will roll out the changes when the conference expands a year later. It also seems very unlikely that the Big Ten will stick to a divisional format once the new schools join. Simply slotting USC and UCLA into the West and sliding someone else (likely Purdue) over to the East, while geographically straightforward, would fail to maximize the value that the two new schools, especially USC, bring to the table. FOX and any other TV network that ends up with the Big Ten’s television rights starting next year is going to want to see USC playing against Ohio State and Michigan as frequently as possible. A divisional format does not really allow for that. The Big Ten would only be costing itself both money and visibility on the national stage by not having its marquee programs play head-to-head as often as possible.

The most sensible solution is to go with what the Big Ten was rumored to be leaning towards before the expansion announcement. That is, having 2-3 fixed annual opponents for each school, then playing each of the remaining schools every other year. With 16 teams, this could work via a 3-6-6 format. Each team has three fixed opponents they play each year, then they play 6 of the other 12 one year, and the other 6 the following year, with home-and-away rotating on a yearly or biennial basis. That way every current Big Ten school would get to see USC/UCLA in their home stadium every four years, and vice-versa. It will also ensure some of the current members play each other more frequently, a common complaint with the current divisional format. Furthermore, three annual fixed opponents should be enough to preserve nearly every long-standing rivalry game within the conference. The teams with no obvious rivals, like Penn State, Maryland and Rutgers, could see their three fixed opponents adjusted every few years to give them more variety.

As for what the Big Ten’s new TV deal will look like, that still remains to be seen. The new contract begins in 2023, but since it hasn’t been officially finalized yet, there will obviously be some change$ (see what I did?) from whatever framework existed before this announcement. What we do know is that FOX will remain as their primary partner. They currently own 61% of the Big Ten Network, and had an agreement for half of the TV rights in the upcoming deal (which again could change, but seems unlikely). ESPN/ABC, NBC and CBS have all been mentioned as serious bidders for the rest of the Big Ten’s inventory. Apple was viewed as showing some interest, but not considered a serious bidder. After the expansion announcement, Apple may have had a change of heart. Before the expansion announcement, it was expected the Big Ten’s new TV deal could be worth up to $1 Billion per year. It would almost certainly get a boost from adding two teams in the Los Angeles market. By then end of the decade, the conference could be distributing about $100 Million to each member. This puts them on par with the SEC, which agreed to a 10-year/$3 Billion agreement with ESPN beginning in 2024 (that number should grow some when Texas and Oklahoma join). Factor in an expanded College Football Playoff starting in 2026, if not sooner, in which the SEC and Big Ten would be expected to make up most of the field, and it’s easy to see why we’re headed from the Power Five to the Power Two.

Almost immediately after the expansion announcement, questions swirled about whether or not the Big Ten would add even more members. Several of the remaining Pac-12 schools contacted the Big Ten inquiring about membership. Oregon and Washington were said to be pushing the hardest to be added as a package with their LA brethren. Both have participated in the College Football Playoff, the only Pac-12 teams to have done so. Washington brings a Top 15 TV market in Seattle. Oregon has a nationally-recognized brand, thanks largely to its Nike ties and playing for the national championship twice in the prior decade. Both schools could make travel lighter for the LA schools, though 18 teams would also complicate scheduling and the Big Ten’s desire to have its most attractive teams play at least once every other year (the arithmetic no longer works for the aforementioned 3-6-6 model). It might force them back into a new divisional alignment. Still, both schools would add some value to the Big Ten.

Sources indicate the Big Ten is putting the Northwest schools on hold for now. Their next target is said to be Notre Dame, long the Big Ten’s white whale. The Irish are loathe to give up their football independence, such that they are willing to accept less revenue than they would earn by joining the Big Ten. However, they have indicated that if access to the Playoff were to become unrealistic for an independent team, that would trigger them into relenting. Are they there yet? Probably not, since we don’t yet know what the next iteration of the Playoff will look like. While an expanded Playoff was shot down last year, it does sound like conference commissioners will revisit the issue sometime in early 2023. I still expect we will see a 12-team field. What might change from the original proposal that was voted down, with further consolidation of major programs into the Power Two, is fewer than the 6 automatic qualifiers that proposal had. A future one may have more at-large qualifiers, and more at-large qualifiers are good for the Irish’s independence. For now, I think Notre Dame is content to sit tight and wait to see how the future of the CFP plays out. The Big Ten will welcome them any time Notre Dame says they are ready. So why rush? Another sticking point: Even if they were to decide they wanted to join the Big Ten, their current contractual arrangements with the ACC might make that very difficult, if not impossible.

What does this mean for the Big Ten? It would seem to point to further expansion being on indefinite hold until Notre Dame arrives at a decision they appear to be in no hurry to make. Having the Irish would probably boost their national profile past even the SEC, though not necessarily making them more competitive on the field. One way or another, with or without Notre Dame/Oregon/Washington, the Big Ten just made a huge move to secure its financial and competitive well-being for many years to come, and if you are a fan of a Big Ten team, you can feel pretty good looking forward.