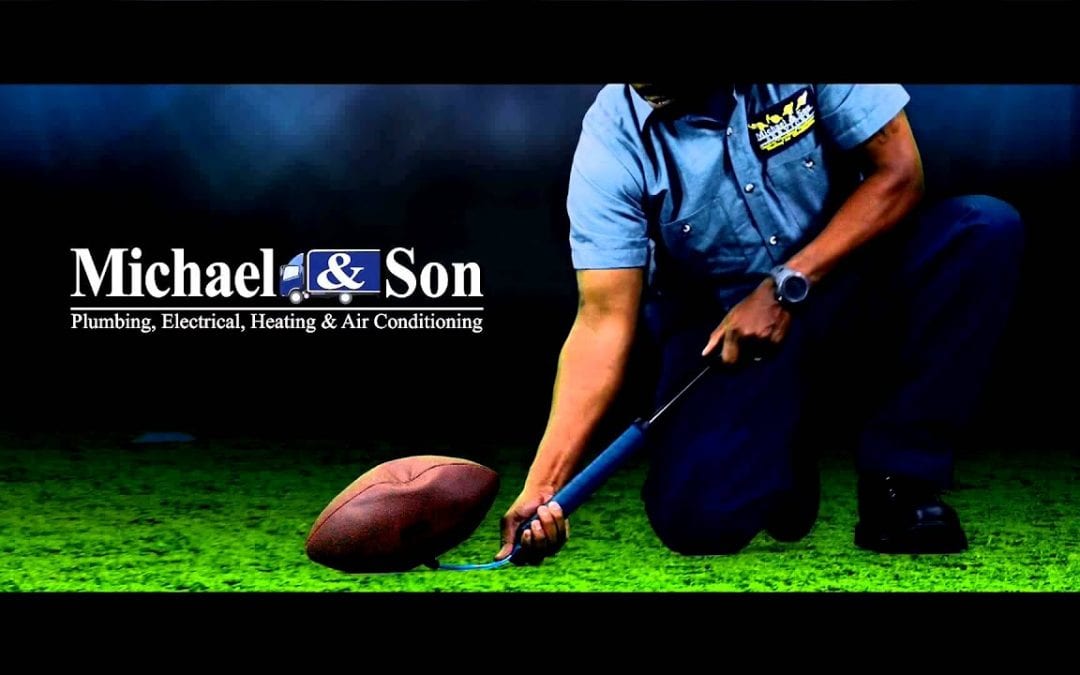 Then came the Deflategate commercial, followed by the Mike Tyson commercial.

This year – the GOAT commercial.

In each case, Michael & Son, the family-owned plumbing and heating company based in Alexandria, VA, has continued to set the standard for local Super Bowl commercials. The backstory on the ads, and the social buzz created by this year’s ad, are as impressive as the ads themselves.

Local ad spots for the big game are arranged individually by the affiliate stations (i.e., these are not the national $5.5M ad buys). For this year, Michael and Son’s agency, ESB Advertising, secured spots in Baltimore, Richmond, Virginia Beach and several North Carolina markets between Raleigh and Wilmington – essentially the company’s service footprint. Spots on WUSA-TV in Washington, DC were not available though the station had been included in the past.

This year’s ad featured a goat and lasted 5 seconds. Snackable content at its best. It aired at the start of the halftime break, when local spots typically appear.

The ad was created by Eiman Bassam, Founder & CEO of ESB Advertising (Alexandria, VA) who has worked with Michael & Son since the first ad appeared in 2014. “The idea for the GOAT ad came up a week before the Super Bowl. It’s nothing that we try to plan out months, years ahead and I didn’t bring it out until Brady made the Super Bowl. We like waiting until 2 weeks out to see what is relevant in sports and politics, what you can talk about and not offend anyone. Something that is funny, so we usually wait until the last minute.”

Bassam added that the ad was intended to “just congratulate the G.O.A.T. Everyone knows what this is. We were going to congratulate him whether he won or not, whether you were a New England or Tampa fan or not, you have to respect what he has done in his career. Now the fact that he won, the way he did – was just icing on the cake.”

To produce the ad, Bassam bought stock video of a goat and added the Michael & Son jingle. “We didn’t have to shoot anything; there were minimal production costs.” The goat was also useful since Tom Brady’s image could not be used in the ad spot.

Unlike national advertisers, who now post their ads online in the week leading up to the game to create early buzz, Michael & Son opts to premiere their spot on TV and then post it to its social channels. “We like to wait until it’s Live and then have it go out. We post it as soon as we get the signal that it has aired, within 30 seconds.” said Christopher Thompson, Michael & Son Director of Marketing.

The timing of the ad, with half the game remaining, was also noteworthy. “At first, I thought it was a little over the top, a little crazy. But obviously, they wanted to get people talking. And it absolutely got people’s attention. Once we put it into the 5-second spot, it made total sense. And once it went social, people got crazy ideas that it [the game] was rigged, that we knew that Tom Brady and the Bucs were going to win the Super Bowl. It was a very funny and well received short 5-second spot.” Thompson added.

Both Bassam and Thompson indicated that, if Brady and the Bucs had not made the Super Bowl, there was not a Plan B. “In previous years, we’ve seen success in waiting to see what happens. Wait, sit back, and hope that something happens. If Tom Brady didn’t play, I don’t know what plan B would have been.” Said Thompson.

For this year’s spot, Bassam specifically targeted the 5-second inventory when booking spots with affiliates, beginning two weeks out from gameday. “The 5-second ad gets more buzz than the 30-second ad. When we started with 5-second ads, no one was buying those. Now, it’s in tremendous demand. If the creative is good enough, you don’t need a 30-second ad.” Said Bassam, who indicated that, years ago, he had to first convince stations to sell him spots that were otherwise reserved for station IDs (5 per game).

Bassam added, “We are lucky to have a partner like Michael & Son that can get creative and push the envelope. Basim Mansour (President) is a visionary, he gets it.”

The relationship started 7 years ago with the Obama Super Bowl, a 30-second spot.

The following year came the Deflategate ad, in reference to the allegation that the Patriots deflated footballs in their win over the Colts in the 2014 AFC Championship game. “We got more feedback on twitter/social on 5-second ads because of how relevant they were. Started during the New England Deflate-gate where we pumped up a football. All we did was pump up a football and play our jingle in the background: “If you can’t, we can.” Said Bassam.

And lastly, the legendary Mike Tyson ad. “With Mike Tyson, it started as a joke. If he can’t knock someone out, one of the technicians would come in and finish the knockout. Obviously, Mike Tyson can knock anyone out, so we got clever and involved his son – he is local. His son couldn’t knock the guy out, so then Mike Tyson came in and finished the knockout. With his son in it, Mike got excited about it. That one took a year of going back and forth. The surprise factor is there – that’s all you are trying to do in the Super bowl. Not sell anything. Be creative instead.” Said Bassam.

Bassam now has 50 weeks before planning the next ad begins. When asked if there was a person that Michael & Son would like to feature in a future ad, Thompson replied, “ Getting Arnold Schwarzenegger would be a dream come true for Basim.”

Below – check out the Tyson spot – Behind the Scenes