The Milwaukee Bucks Win the NBA Championship “the Hard Way” 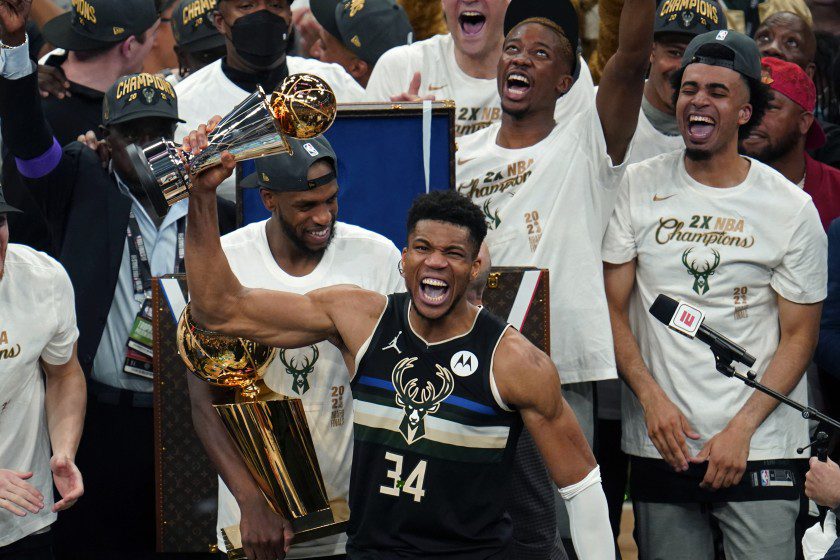 The 2020-21 season can be described using one word: Anomaly. Think of all the unexpected occurrences that took place throughout this long, injury riddled season.

Denver Nuggets Center Nikola Jokic became the MVP of the league. Neither the Los Angeles Lakers nor the Brooklyn Nets represented their respective conference in the NBA Finals. The Atlanta Hawks reached the Eastern Conference Finals in Trae Young’s first ever postseason appearance and the New York Knicks made the Playoffs as a 4th seed. See, insane stuff isn’t it? But what may be even more crazy is the path in which the Milwaukee Bucks had to follow in route to becoming NBA Champions.

The world may be in awe of Giannis Antetokounmpo’s 50-piece to close out Game 6 against the Phoenix Suns, but this was surely not the result anyone expected when heading into these NBA Playoffs let alone this season.  The Milwaukee Bucks did it without a super team. They did it with the deck stacked against them (heavily favoring the trio of Kevin Durant, Kyrie Irving, and James Harden in Brooklyn). But most importantly they did so while facing every form of adversity there is to face in the Playoffs.

They sure did do it, embarking on a long journey filled with ups and downs on the road to raising the Larry O’Brien trophy. With that, let’s take a look back at the well-chronicled roller coaster ride that led them to bringing the Milwaukee Bucks franchise their first championship since 1971.

After falling to the Miami Heat in a tough Round 1 exit in the Orlando Bubble, it was clear that the Milwaukee Bucks needed a splash move to improve their roster.

The weak link of their roster was point guard as both Eric Bledsoe and George Hill are not very great shot creators and at times are not seen as threats to score. Hence the trade for fringe All-Star point guard Jrue Holiday.

This transaction established a Milwaukee Big 3 of Giannis Antetokounmpo, Khris Middleton and Holiday that on paper seemed a bit overrated but would eventually become the key to the Bucks’ championship success.

Although this was seen as an interesting move by most NBA analysts, this was also one that was relatively expected.

Despite the series of postseason blunders in years prior, it was made clear by Giannis that he wanted to reach the pinnacle of success as a member of the Bucks organization. When signing the super max extension for $228 million over the next five years, he made it clear that resigning went beyond the play on the court. “This is my home, this is my city,” Antetokounmpo posted on Twitter and Instagram on Tuesday. “I’m blessed to be able to be a part of the Milwaukee Bucks for the next 5 years. Let’s make these years count. The show goes on, let’s get it.”

Although the heartfelt gesture was music to Milwaukee’s ears and surely a positive step in proving that the super max could help in protecting the competitiveness of small market teams, the move was still seen as questionable considering the options.

He had the option to wait until the end of this season to see the lay of the land and then decide on his future. He also had the waiting suitors like Miami, Dallas and New York who all cleared cap space to potentially pursue him this off-season. Instead, he quieted all the noise and potential rumors that would follow all season. But of course, with such a bold move comes the expectation to back it up and with that the race to a championship began.

After two top tier acquisitions in Jrue Holiday and retaining Giannis Antetokounmpo, the Milwaukee Bucks were due to strike out eventually. But when looking back at the failed exchange for Bogdan Bogdanovic there is only one way to describe such a blunder: Weird.

For those of you who forgot, the Milwaukee Bucks were pursuing a potential sign and trade option for Bogdan Bogdanovic back in December. The trade was rumored to potentially send Donte DiVincenzo, Ersan Ilyasova and D.J. Wilson to Sacramento. This would eventually fall through as the mere negotiation of a trade involving a player who is an unsigned restricted free agent violates the league’s tampering policies.

The Bucks would also be stripped of a 2022 second round draft pick as part of the penalty. Bogdanovic would eventually go on to sign a four-year, $72 million deal with the Atlanta Hawks, leaving small market Milwaukee holding the bag on yet another big-name free agent.

Tough Start to the NBA Season

With the start of the season, most viewed the Milwaukee Bucks as the 2nd best team in the East behind the Brooklyn Nets led by Kevin Durant and Kyrie Irving. As a team that tends to dominate the regular season, it was clear that with Milwaukee’s talent they would be in the mix for a top seed, but the real questions always look ahead to the postseason.

One of the biggest questions was whether or not Coach Mike Budenholzer would be open to risking losing regular season games to help his team adapt to switching defense. The over commitment to a traditional man to man and zone scheme has been something that hurt the Bucks for two straight postseasons and the adaptability of Coach Bud was beginning to become a large talking point around the league.

With that, the Bucks did begin using the regular season as exhibition games to learn and masters switching defense but of course it came with its lumps. Milwaukee entered the All-Star Break with a record of 22-14 which already gave them nearly as many losses as they had through the entirety of the 2019-20 season.

With the down time of the All-Star Break and the chance to improve at the trade deadline, the Bucks quickly turned things around. Over the course of the second half of the season things just started to lean in Milwaukee’s favor.

Jrue Holiday signed a much-anticipated contract extension (four years, $134 million). They acquired a defensive stopper and the king of the switchable defense, P.J. Tucker, from the Houston Rockets at the trade deadline. In turn leading to a 46-26 finish as the three seed in the Eastern Conference. But more importantly, they ended the season as the No. 1 ranked scoring team (120.1 PPG), sixth in Offensive Rating and tenth in Defensive Rating.

With the combination of an MVP caliber player, supporting All-Star level players and a top-5 offense and a top-10 defense with a new wrinkle, this team was geared up to make a run at the title.

In a long postseason filled with dramatic moments, the Milwaukee Bucks might have had the most thrilling road to the NBA Finals that we have seen in quite some time. Here are some of the highlight moments from Milwaukee’s Eastern Conference Run:

Sweep the Miami Heat (4-0) as an act of sweet revenge in payback to what happened in last year’s Playoffs.

• Khris Middleton hit a game-winning three at the end of regulation to take the series defining lead in Game 1. Milwaukee would finish the series in dominating fashion, going on to win the next three games by 15+.

• Brooklyn Nets went up in the series 2-0 and had a chance to steal a Game 3 victory on the road.

• Milwaukee ties the series up 2-2 on the back of 34 points and 12 rebounds from Giannis Antetokounmpo in Game 4.

• Down 3-2 on the brink of elimination, the Bucks would go to win both Games 6 and 7. This was on the back of 81 combined points by the Bucks Big 3 in Game 6 and a 40-point performance by Antetokounmpo in Game 7.

• Milwaukee takes the series lead 2-1 with back-to-back victories led by Antetokounmpo and Middleton.

• With Trae Young going down due to injury in Game 3, the Atlanta Hawks lean on veteran guard Lou Williams to lead the charge in Game 4 (21 points) as the Hawks upset Milwaukee 110-88 to tie the series up 2-2.

• Giannis Antetokounmpo missed Games 5 and 6 due to a hyperextended knee suffered in Game 4 leaving Khris Middleton to carry the Bucks to two straight victories to close the series. Middleton had 58 points combined in the two close out games along with Center Brook Lopez who dominated Game 5 with 33 points, seven rebounds and four blocks on 14-of-18 shooting from the floor.

In probably one of the most improbable NBA Finals matchups in recent memory, it all came down to a Battle of the Small Markets.

The Phoenix Suns led by Chris Paul seemed destined for the championship after their somewhat dominating run through the Western Conference and going up 2-0 to start the series. Instead, it was the Milwaukee Bucks who were indeed destined for greatness.

After losing the first two games, Milwaukee went on to win four straight led by Giannis Antetokounmpo who truly played up his two-time MVP status. Averaging 35.2 points, 13.2 rebounds and 5.0 assists for the series, Antetokounmpo etched himself in the history books all across the board in his route being named Finals MVP.

Then of course the cherry on top is that he joins the company of only the great Michael Jordan as the only players to win multiple MVPs, a Defensive Player of the Year, and a Finals MVP award. Legendary status following a legendary performance.

In a season filled with parody, twists, and turns, it only feels right that the 2020-21 NBA ends on an unconventional “feel-good” story. Some would argue that seeing Chris Paul win a championship after 16 long years of falling short would have been a more heart throbbing end. But it is hard to deny that what Giannis Antetokounmpo and the Milwaukee Bucks have done is nothing short of special.

In the era of super teams, the home-grown superstar took a chance on the team that drafted him, and his loyalty was rewarded with what may be his first NBA Championship of many. Sounds like a storybook ending to me. Congratulations once again to the Milwaukee Bucks for being named the 2020-21 NBA Champions!