The Next Superstar QB? 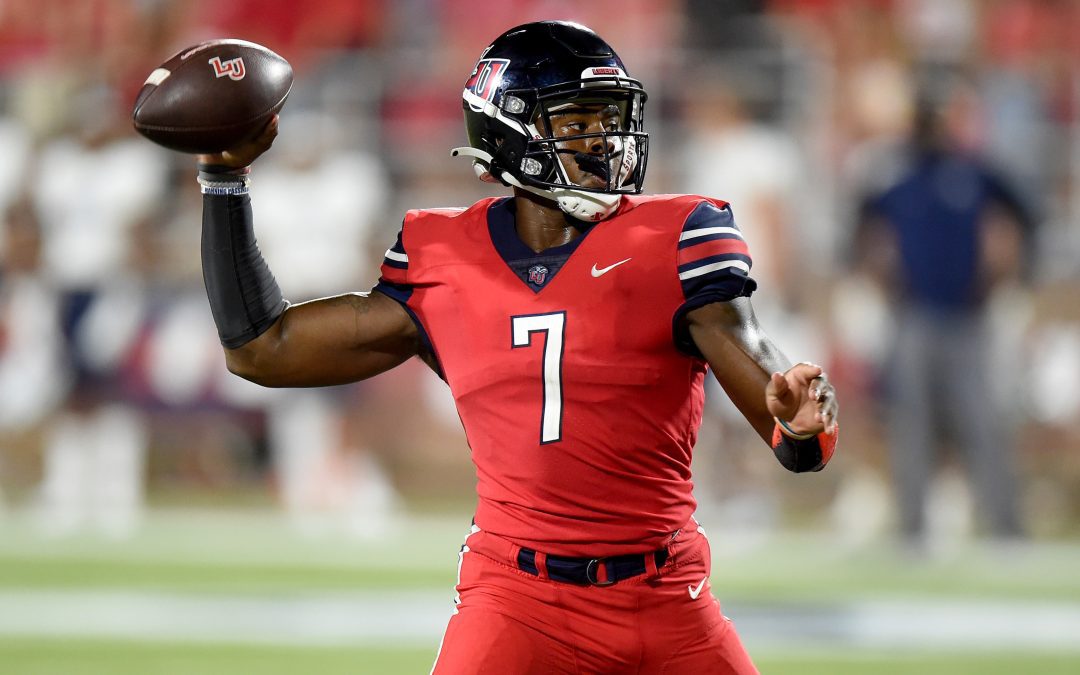 What do you get when you combine the physical gifts of Michael Vick and the anger-inducing, decision-making inconsistencies of Jameis Winston?

The answer to that question is a quarterback prospect named Malik Willis.

I’m not sure there has ever been a prospect with a wider range of outcomes than the former Liberty Flames product.

The cap on his potential on the next level feels like a stadium with a retractable roof, potentially limitless, or could be capped by influences outside of his control.

But what exactly about his game gives him such a high ceiling?
Well, for starters, his set of physical tools are all elite.

His ability to make every throw on the football field, deep ball accuracy, and dynamic playmaking ability feel like the recipe for a future league MVP.

However, for every jaw-dropping highlight he produced… he would then hold the ball for far too long leading to an abundance of unnecessary sacks, or he would make some head-scratching decisions to put the ball in harm’s way.

Is Malik Willis a franchise quarterback in the NFL?

My answer is yes… but with some stipulations.

As is the case with the majority of high-profile quarterbacks entering the NFL, their success, or failure, is usually tied to the system and situation they find themselves drafted into.

On one hand, Jackson had limitations as a passer entering the NFL, but his offensive coordinator, Greg Roman, designed a run-heavy scheme that catered to what Jackson did at an elite level early in his career, which led to immediate success and time to develop as a pure passer of the football.

While Justin Fields, who I believe was further along as a passer entering the league than Jackson, saw his head coach, Matt Nagy, set him up to fail in his first career start by calling virtually no designed quarterback runs, didn’t move the pocket, and called a plethora of empty formations, which left Myles Garrett on an island against an aging Jason Peters… which led to a disastrous starting debut for a rookie QB.

Similar to Jackson, Willis is going to need some time to develop as a passer in the NFL.

His tape doesn’t showcase much of him going through progressions, throwing with anticipation into tight windows, or playing on time. Don’t get me wrong, he does have some examples of these traits, but simply not a high enough volume to say I feel confident he will be consistent in these departments on Sundays.

Despite my concerns, Willis can step in on day number one in the NFL and give opposing defensive coordinators nightmares… if the right offensive mind builds a game plan catered to his strengths.

His dynamic ability as a runner will force defenses to account for him in the running game and, oftentimes, will give the offense an additional blocker on designed QB runs. It also doesn’t hurt that he’s not just fast for a quarterback, he’s just flat out fast.

Naturally, this will cause defenses to roll additional defenders into the box to slow him down as a runner, leading to more one-on-one deep shots on the outside, which I believe is his greatest strength in the passing game with his howitzer of an arm that leaves a trail of smoke on the ball when he decides to put some zip on it.

Hugh Freeze emphasized a vertical passing attack with a litany of nine routes and wheel routes up the sideline to let Willis showcase his elite-level arm talent and deep-ball accuracy.

So now that we know his strengths and weaknesses, does any team in the market for a quarterback heading into the draft stand out as an ideal landing spot?

The Detroit Lions will have the first chance to select Willis at number two overall, but I’m not really sure it would really be the ideal fit. The offensive line looks solid on paper, but who is going to win consistently on the outside to make his life easier through the air? Sure, I really like T.J. Hockenson, D’Andre Swift, and Amon-Ra St. Brown, but they are working primarily out of the slot or backfield. D.J. Chark was just released by the receiver needy Jaguars and Josh Reynolds failed to make his mark with the Los Angeles Rams. It might not be the worst landing spot, but I don’t think it would set Willis up to succeed early in his career.

The Houston Texans sit in the three spot and could decide to move on from second-year signal-caller Davis Mills. However, if I’m Willis… I’m praying the Texans don’t draft me. Let’s see… the organization is still in the process of rebuilding in the post-Bill O’Brien era… they have one of the weakest sets of skill position players in the league… and they still have plenty of leaky spots along the offensive line. For the cherry on top, I’m not sure a team led by Lovie Smith really seems like an ideal landing spot for offensive innovation and quarterback development.

This brings us to the team sitting in the five and seven spots this NFL draft… the New York Giants. Now, I’m fully aware the Giants appear to be giving Daniel Jones one more season under center. On the surface, the team signing journeyman Tyrod Taylor this offseason seems to validate that narrative. However, the new head coach is Brian Daboll, who is one of the reasons that Josh Allen has gone from a gifted quarterback prospect to one of the premier stars at the position. In fact, a comparison of Allen and Willis is pretty fair. Could Daboll see Willis as his next quarterback to groom into a star? Possibly. And while I believe this could be the best coach for Willis to land with, the Giants’ pass-catchers and offensive line are average units at best, and Saquon Barkley is still trying to find the burst that made him special as a rookie. It’s a good landing spot, but not perfect.

The team sandwiched in between those New York picks is the Carolina Panthers. Matt Rhule is fresh off losing the Deshaun Watson sweepstakes and is likely going to consider selecting one of the quarterbacks in this draft. On paper, the Panthers do check a lot of boxes. Talented running back? Check. Talented receivers? Check. Offensive-minded head coach? Check. Willis would have to compete with Darnold for the job, but having a solid defense and the security blanket of Christian McCaffrey would be a nice starting point for a rookie quarterback.

Next up in the eight spot would be the Atlanta Falcons, who just decided to move forward with Marcus Mariota after also losing out on Deshaun Watson. And while I do think Arthur Smith is a quality offensive coach, the Falcons have absolutely zero weapons to throw to outside of Kyle Pitts and Cordarrelle Patterson. Admittedly, this landing spot would make me a bit nervous for Willis.

Bringing us to the last quarterback-needy team picking in the top ten, the Seattle Seahawks. The post-Russell Wilson era is upon us and as of this moment, the answer under center is Drew Lock. As far as weapons go, D.K. Metcalf, Tyler Lockett, and Noah Fant are easily the best collection of pass-catchers on this entire list. Sure, the Seahawks’ offensive line could use some work, but Willis would at the very least have some vertical threats to complement his elite-level arm strength.

When you venture outside of the top ten in the 2022 NFL Draft, the Washington Commanders at 11, the New Orleans Saints at 16 & 19, and the Pittsburgh Steelers at 20 all could make for viable landing spots for Willis as well.

Among those options, the Pittsburgh Steelers feel like the best landing spot for Willis. The presence of an outstanding head coach in Mike Tomlin, a Super Bowl caliber defense, a quality workhorse running back, and quality wide receivers that can win vertically are all symptoms of what feels like a winning formula for both sides.

Can you confidently say any of them will be a starter in 2023?
I can say confidently that Malik Willis will be starting for a team a year from now.

Sure, he isn’t a finished product as a passer coming into the NFL… but neither was Josh Allen.

However, for every Josh Allen, there is a Jake Locker who doesn’t fulfill his franchise quarterback destiny.

The tools are there… and one team is going to believe that Malik Willis is the next superstar quarterback in the NFL.

We’ll find out which team believes that exact statement later this month.