These Rookie Level Orioles Prospects Stood Out In 2022 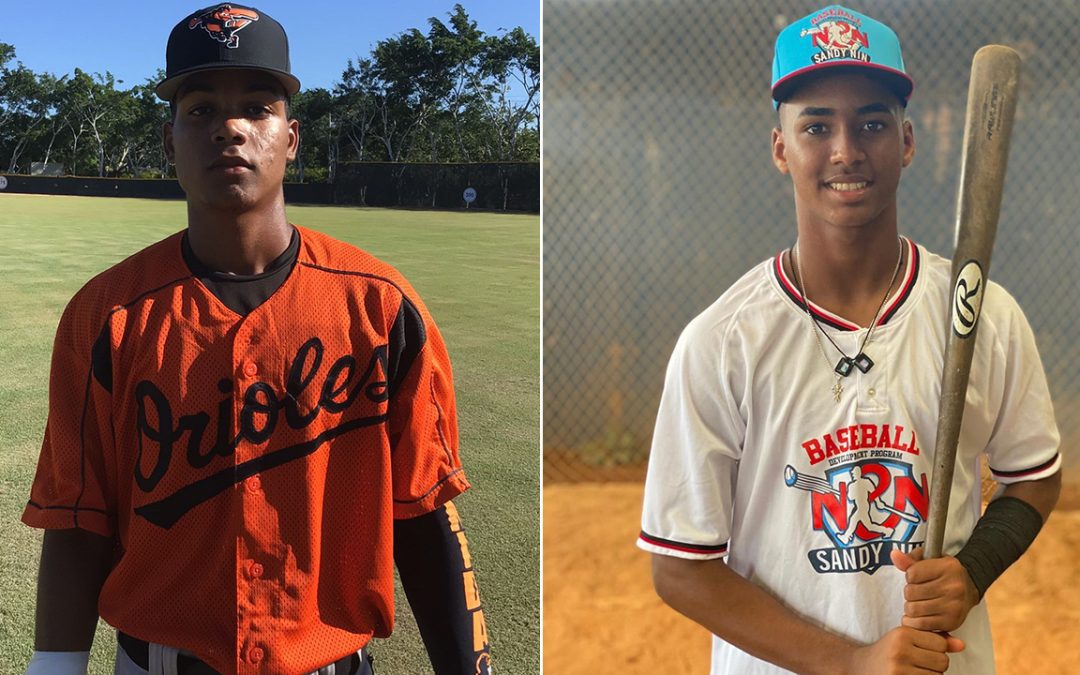 I refuse to believe it, but the 2022 Minor League Baseball season is quickly coming to a close. Luckily, one of the many changes that has come to the minors is the staggered finish, allowing me to slowly ween off my MiLB high versus ripping off the band-aid on one final date.

As of September 16th, the Dominican Summer League, Florida Complex League, and Low-A Delmarva Shorebirds have all wrapped up their seasons, leaving just the Aberdeen IronBirds fighting for a South Atlantic League championship, the Bowie Baysox fighting for an Eastern League playoff spot, and the Norfolk Tides going through the end of September with high-profile prospects like Jordan Westburg, Colton Cowser, Joey Ortiz, and Grayson Rodriguez aiming to close their seasons on a high note.

For the teams who have wrapped up, I wanted to highlight a few standout players to keep your eyes on entering 2023. This first article will just focus on the Dominican Summer League and the Florida Complex League rosters. Since I’m not able to do really deep dives as I can with prospects in affiliated ball, this is more of a guide of intriguing names to note for next season when they come stateside or find their way to Delmarva.

One of the more refreshing things about the Baltimore Orioles minor league system is the recent emphasis on scouting and bringing in international talent. What’s been most impressive is that the early returns on the Mike Elias-era international signing classes haven’t fully featured just the high-dollar signings, but players like Frederick Bencosme, Deivy Cruz, and Juan De Los Santos are all finding notable degrees of success in affiliated ball as teenagers, without having received big signing bonus paydays.

DSL games aren’t streamed anywhere and video coming out of the DSL is limited to a few highlights posted by players on their Instagram, so we don’t have much to go on in terms evaluating guys outside of stat lines and the few bits of information I’ve been able to gather from sources throughout the season. While scouting the stat line, especially for DSL and FCL players, tells you next to nothing about a player, there are a few indicators of possible breakout potential and there were a handful of players in the DSL this season who stood out in that way.

IF Aron Estrada– The 17-year-old switch-hitting infielder was a DSL All-Star in 2022 and finished with a .368/.483/.566 slash line with 18 extra-base hits and more walks (29) than strikeouts (23). His 175 wRC+ ranked 5th in the DSL and he featured one of the lowest swinging-strike rates in the league. There’s no doubt that he will be in Sarasota to begin 2023, with a chance at ending the season in Delmarva if his bat continues to play this well. He didn’t receive the highest signing bonus (not even close), but he’s easily planted himself at the top of my must-watch list next season.

OF Braylin Tavera/IF Leandro Arias– These two signed for the highest amounts back in January and although their stat lines don’t jump off the page, all reports this season were promising. Tavera finished with a .411 OBP, drawing 36 walks in 47 games, and there were a number of balls put in play at 100+ mph off the bat of Arias throughout the season. The more I’ve heard about Arias, the more I understand why FanGraphs had him so highly ranked in this system before the season started.

SS Edwin Amparo– Amparo struggled out of the gates after receiving the third highest signing bonus in this past international class, but finished his debut campaign strong, posting a 1.017 OPS and .373 average with nine extra-base hits, including his first two career home runs (just 5 XBH through first two months). It will be interesting to see if the switch-hitting shortstop can tap into more power as he fills out, adding yet another impressive middle infield prospect to this system.

IF Alfredo Velasquez– You won’t find much, if anything, written publicly about Velasquez, but his stat line peaked my interest. The 17-year-old put up a .572 OPS in June, then a .728 OPS in July, and a 1.060 OPS in August, walking more than he struck out (12/13 K/BB), and swiping a bag in 14 of 17 attempts. His numbers show exactly what you want to see at this level- steady progression. He also had the third-lowest swinging strike rate in the DSL at 12.9%.

OF Jean Mata/Raylin Ramos– Mata has received high praise for his baseball IQ, speed, and defense in centerfield, and after a slow start to the season, started showing more with the bat. Mata ended the year with a .963 OPS in August with 12 walks to 6 strikeouts in 16 games. He had a .403 OBP and 24/22 K/BB on the season. Ramos has a bit of a different profile, bringing more power and size to the table. Ramos posted a .288/.359/.410 slash line with a pair of home runs and an impressive 21/15 K/BB line. For all of these guys at this level, the K/BB numbers are the first thing I tend to look at and are probably the only numbers you can take much stock in.

SS Cristian Benavides– Tabbed by Baseball America’s Ben Badler as the sleeper of this past class in the O’s system, Benavides saw his month-to-month OPS jump from .566 to .756 to .917 and collected six extra-base hits in August after recording just two through the first two months of the season. Described as having “plus speed, a plus arm, and big power for his age”, be sure to keep close tabs on Benavides in Sarasota next season.

Finally, a big group of lefties who stood out on the mound. Andres Parra stands just 5’11” but he showcased a pair of impressive breaking balls and a bit of a unique arm motion in his delivery that seems to make it more difficult for hitters to pick up. Parra recorded a 2.43 ERA and 28 K in 29.2 IP. Noelin Cuevas, another December 2021 signing, fanned 40 across 30 innings while allowing 12 walks and no home runs. 19-year-old Jose Ramirez was repeating the DSL this season after an injury limited him to just 16 innings last saeson. He struck out 73 in 52 IP and held hitters to a .205 average, but he did allow 42 walks. We have seen pitchers in the lower levels of the minors clean up their control as they move up the ranks, so based on the strikeout total alone, Ramirez should be an interesting player to watch in Sarasota next season.

Then there’s probably my favorite two among this group, a pair of 6’3” lefties in Jose Leandro and Luis De Leon. Leandro didn’t sign until May of this year and finished with a 1.91 ERA across 10 outings, but that includes one outing in which he gave up three runs. He only gave up three total runs in his other nine outings. De Leon logged only 28 innings, but struck out 38% of batters he faced and produced a groundball rate north of 60%. He did have a 5.14 ERA, but the FIP (2.63) and xFIP (2.87) were both much more impressive.

Despite winning just 16 games this season, the FCL Orioles started to see the results match the work being put in as the season progressed, and saw a breakout name or two emerge as guys who could make a bigger name for themselves when more eyes are on them with Delmarva. A few of the better performers were moved up to Delmarva before the end of the season, so I’ll discuss them next time. For this peice, I’ll focus on guys who spent all or the vast majority of the season in Sarasota.

No point in waiting to talk about the biggest (in more than one sense) performer from the FCL in 2022, catcher Samuel Basallo. Basallo played half the season as a 17-year-old yet finished tied for the league lead in home runs (6), hit .278 with a .350 OBP, and ranked among the league’s best with a strikeout rate of 20%. He’s likely going to make his Delmarva debut as an 18-year-old, forming quite the catching duo with fellow teenage prospect Creed Willems. His future defensive home will be figured out later, for right now, Basallo has received high praise for his defensive abilities behind the plate and very strong arm.

One of the breakout names among this group was 18-year-old infielder Angel Tejada. After hitting .063 in July (seven games), Tejada posted an OPS of .787 in July and hit .391 with an 1.136 OPS over his final seven games. He logged three home runs and was able to do what the Orioles want to see their hitters do- keep the ball off the ground. Tejada now has an .813 OPS through his stops in the DSL and FCL.

I would not be shocked to see IF Anderson De Los Santos emerge as one of next year’s biggest risers. The 18-year-old had a .904 OPS last year in the DSL and while his numbers didn’t pop in the FCL this year, reports on his baseball IQ, dedication to the development process, and ability to mash baseballs with impressive exit velos are all very positive. De Los Santos walked just as many times as he struck out (23) and finished the season with a .345 average and .907 OPS over his final ten games. He ranked among the league’s best in strikeout and swinging strike rate.

I’ll throw out one more name for the real diehards out there, catcher Carlos Rodriguez. Rodriguez was signed in 2021 out of Venezuela and made his stateside debut this year in Sarasota as an 18-year-old. An injury ended his season early but he ended up waking 17 times to 18 strikeouts in 28 games (.403 OBP) and hit a pair of home runs. Like Cristian Benavides, Rodriguez was tabbed by Ben Badler at Baseball America as his signing class sleeper one year prior (“He’s extremely athletic for a catcher, with slightly above-average speed underway and a good arm from behind the plate.” per Badler). He likely repeats in Sarasota next season but if he plays like did in his limited time in 2022, he could find himself in Delmarva before the end of the year. Reports coming out of Florida on Rodriguez matched the scouting reports coming out of the 2021 signing period. He’s yet another catcher in this underrated and deep group of catchers in the Orioles system.

But what about Maikol Hernandez? I don’t know yet. We’ve heard about his five-tool potential and premature physical comps of Alex Rodriguez and Manny Machado thrown on him (can we stop making comps a thing? They are pointless and always lazy), but he’s now played in 82 games between the DSL and FCL and owns a .191 average, .560 OPS, a 92/39 K/BB and has yet to hit his first career home run. Koby Perez, Orioles Director of International Scouting, mentioned before the end of the FCL season that the organization made some adjustments to his game and he was working through those. He did see an uptick in production immediately after that, but we’ll see what 2022 brings.

Overall, it was great to see new names pop up in 2022 and see some familiar names take a step forward this season. With the Orioles already being connected to one of the top international signings in next year’s class (could possibly become the first Orioles signee to get more than $2 million), 2023 is sure to provide even more excitement at these levels.