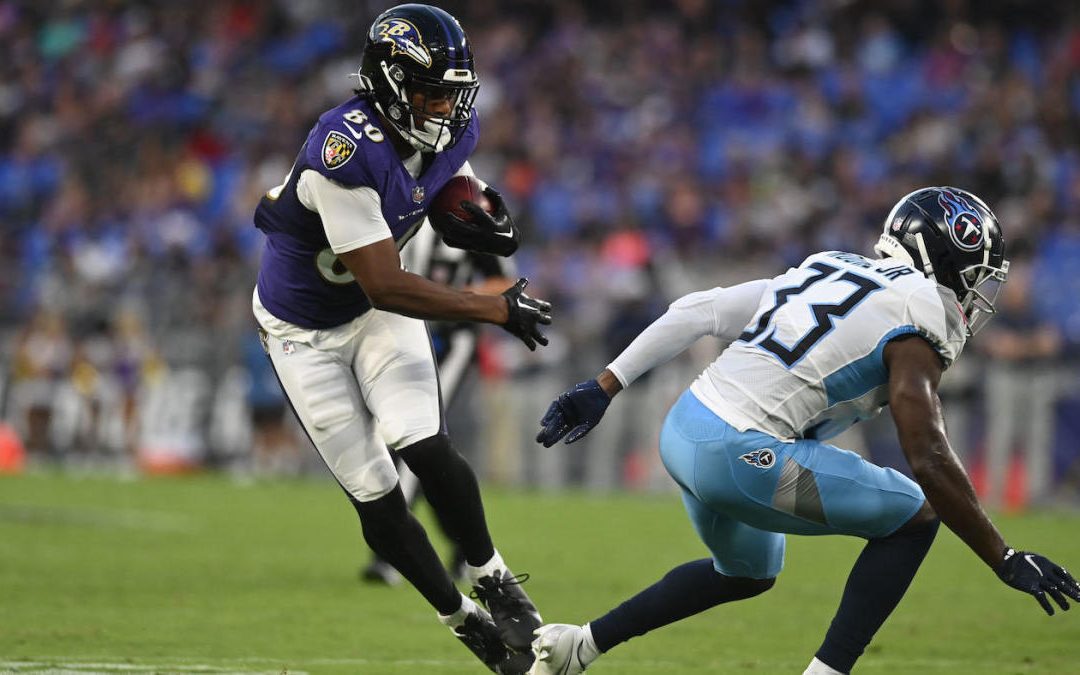 The Ravens extended their NFL record 20 game preseason winning streak to 21 on Thursday Night after defeating the Tennessee Titans 23-10 at M&T Bank Stadium. The game did not showcase any starters but did showcase many second-string players and rookies. Tyler Huntley got the start at QB and orchestrated the offense well for most of the night before giving up the reigns to backup Anthony Brown. The defense also played well, they tallied 24 pressures and really made life uncomfortable for the Titans’ backups. Given it is still only preseason, it is still encouraging to see the backups and rookies play admirably. Below I will highlight 3 takeaways that stood out to me in the victory.

The fourth-round rookie from Coastal Carolina really impressed in his first NFL game. The 6’5 245-pound Tight End showcased his athleticism all night long hauling in 4 passes on 4 targets including 2 highlight reel contested catches. He also showed his impressive juking skills when he shook a titans defender causing him to fall to the ground as he gained a first down. If the Ravens are thinking about turning the clock back to 2019 when they showcased Mark Andrews, Nick Boyle and Hayden Hurst. Then Likely can slide in easily in the Hayden Hurst role and may be even more productive. Likely’s only downfall were his two holding penalties that took back two first downs. But this is the preseason and errors like that is why they play the games. Likely has been buzzing in camp and it translated over in his first preseason game. With Charlie Kolar expected to miss part of the regular season, expect Likely to get a lot of playing time.

With starters Chuck Clark and Marcus WIlliams not playing, we got to see plenty of first-round pick Kyle Hamilton, former starter, Tony Jefferson and Geno Stone. All three players played well in the first game. Out of the three, Geno stone was the most impactful, on one series he broke up two passes, one in the flat, one deep in the endzone and then finally grabbing an interception to kill the drive. Truly excellent work from the Raven’s fifth safety. Hamilton, however, had an up and down night. He missed three tackles in the game, one was notable because it led to a Malik Willis TD scramble. To put into perspective, he missed two tackles during his senior season at Notre Dame. So, this type of performance should not be a consistent pattern. But the rookie did manage to recover a fumble and you saw his range plenty of times closing quickly on ball carriers. The safety group will be an interesting position to watch this season. You can make an argument all five players are starter quality. With Clark and Williams entrenched as the starters, expect the Ravens coaching staff to be very multiple with their looks deploying the “backup” safeties throughout the season.

Patrick Queen and Josh Bynes got the night off like the rest of the starters so we got to see some of the backups showcase their skills. Malik Harrison had an excellent game in run defense, he had two tackles and added a forced fumble. Harrison needs a big season to solidify a potential roster spot next season. But this was a good sign from the former third rounder from Ohio State. Most notably, Josh Ross, the rookie undrafted linebacker from Michigan posted a game high 91.5 PFF grade. The Ravens have a long history of undrafted linebackers making the team and making an impact. Could Ross be the next one? He has a history with current Ravens Defensive Coordinator, Mike McDonald and if he keeps making plays in the preseason, there is no reason to think the team would not add him to at least the practice squad. The same things can’t be said for the other two linebackers, Diego Fagot and Kristian Welch. Both players graded very poorly and will want to forget this game. Welch is a core special teamer and will most likely make the team as such but you still would’ve liked to see more from him. Fagot is a longshot to make the roster and will need a strong camp/preseason to have any hopes of making the team.

The Ravens will travel to Arizona for their next preseason game. Expect more of the same. Lots of Tyler Huntley and lots of rookies and backups. The team looks like they are taking the smart approach of not playing any starters. After last season, how can you blame them? The team will look to extend their famous preseason winning streak to 22. But more importantly, they’ll try to come out of the game as healthy as possible with the start of the season being less than a month away.