Three Starters the Orioles Could Acquire Via Trade 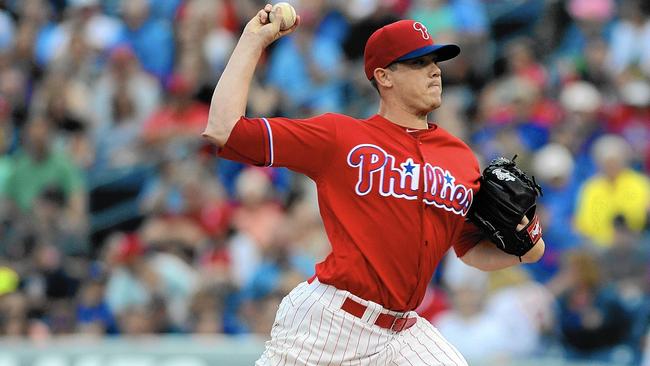 The experts didn’t have the Orioles playing this well. Not a single one of the more than 40 staffers at FanGaphs (myself included) had them in the playoffs for 2016. So to be sitting at 28-21, just two games behind the Red Sox has got to feel good. Perhaps the biggest surprise is they’re allowing just 4.16 runs per game, better than the 4.33 league average. And yet I still feel that starting pitching is very clearly their biggest need entering June. Chris Tillman is having a breakout season and Kevin Gausman has been strong since returning from injury, but Yovani Gallardo and Ubaldo Jimenez have been living nightmares and Gallardo on the DL has forced a lot of work from Mike Wright and Tyler Wilson.

If they want to stay in contention, they’re going to need some reinforcements. Dylan Bundy isn’t coming out of the bullpen. The Double- and Triple-A affiliates don’t have anything worthwhile on the horizon, either. Sorry, Odrisamer Despaigne. So they are going to have to hit the trade market. Unfortunately, that means they will have to give from their already-thin minor league system, but I’m not sure they are going to pass an opportunity to stay in it.

Here are some potential arms they could chase down. Let’s start a couple guys who will be available, but probably don’t make sense for different reasons.

Everyone has the Braves dealing Teheran because they’re terrible and they’ve been dealing everything not nailed down for prospects. But Teheran is a whopping 25 years old and signed to a super-favorable deal until 2019 with an affordable 2020 team option. Per Ken Rosenthal, Braves GM John Coppolella has said he’ll need to be overwhelmed for Teheran. More to the point, they would need a young, MLB-ready bat. From the same Talking Chop piece:

[T]he only way in which Teheran will be traded is if they receive a major league hitter “of comparable quality and age in return.” Coppolella went further and stated that “the days of moving guys like Teheran for prospects are over,” and that he’d have to receive an “overwhelming” offer in order to move Teheran for prospects.

About the only thing I could think working here is Jonathan Schoop-for-Teheran and while I’m a huge Teheran fan, I’m not sure that’s enough of a net positive to pull the trigger. The fact is, the Orioles can’t afford to take from their MLB team to improve the pitching. Their offense is already far from perfect and taking one of the two young building blocks in the lineup is a bad idea. Teheran could give them a nice 1-2-3 with Tillman & Gausman, but he’s cost-prohibitive.

Shields took a 3.06 ERA into his Tuesday afternoon start in Seattle and he was positively devastated to the tune of 10 runs in just 2.7 innings (of course when you allow 10, you can go all nine and your ERA is still destroyed so who really cares how many innings he went). His ERA jumped 1.22 runs and WHIP 0.43 points in this one outing. That’s the kind of stuff that happens in early April when numbers bounce around wildly. It’s not often you see that on your 11th start of the season.

This shellacking couldn’t have been worse timing for the Padres as they look to deal the veteran arm, but it also highlighted his biggest weakness: the home run. Even if he still had the 3.06 ERA/1.30 WHIP combo he entered the day with, it’d still be a poor fit for the Orioles specifically because they play in both a home run park and division. Shields allowed an MLB-high 33 homers last year, his first in the NL, and now has a 1.2 HR/9 after Tuesday’s start.

On paper, he’s a semi-fit because his contract will make it difficult for San Diego to ask for a ton unless they send a mint with him. So the O’s could offer to pay a larger portion and give less, but his profile just doesn’t fit and with the contracts of Jimenez and Gallardo already in tow, they don’t need to be paying Shields $21 mil per for 2017-18.

Now, three arms likely to be available and possibly strong fits for Baltimore.

He’s the prize of the trade market right now. The A’s are tied for last and 7.5 games back of Texas and Seattle (who are tied themselves) so Hill’s excellent numbers aren’t much use to them. He’s also 36 years old and on a one-year, $6 million dollar deal so he’s not really a long-term fit for them, either. He suffered a mild groin strain in his last start, but it’s expected to be just fine so let’s operate as though he’s healthy for now. Though, it’s also worth noting that he has an injury history that contributed to his combined 182 MLB innings since 2007 after a breakout campaign in which he threw 195.

OK, so he has some injury risk. Any 36-year old would. We can accept that. Beyond that, he’s been absolutely incredible in 15 starts last September. Former MLBer Brian Bannister got Hill to re-think how he thought about pitching and focus on his amazing curveball to find success. The dividends came through in Triple-A and then in a four-start audition with the Red Sox. He faced the rest of the AL East and absolutely smashed them with a 1.55 ERA, 0.66 WHIP, 7.2 K:BB, and three 10-strikeout games.

Hill really only has fastball/curveball. While Fangraphs shows a 10% slider, it’s really just manipulation of his curveball, so he essentially throws his curve 52% of the time and the fastball 48%. He gets a ton of whiffs to support his 28% strikeout rate and when he is allowing contact, it’s rarely for hits (.206 AVG) and regularly on the ground (48%). The difficulty in squaring him up shows in his 6% pop-up rate which is almost double the MLB average. The skills aren’t really in question for Hill, even after only 15 starts. Walks are issue sometimes, but being pretty unhittable gives him leeway there. The only substantial risk is injury, a risk worth taking for his upside.

The cost wouldn’t be insane, but he’s not coming freely, either. The A’s can give him a qualifying offer which would either re-up him at a very fair rate or get them a first-round pick so the O’s will need to give up a medium prospect. Given the thinness of their system, I could see it being a backend top-10 guy.

I don’t love Helly, but the market isn’t ripe with options. He was once a promising prospect with Tampa Bay and even had a couple strong seasons – though he was definitely outrunning his modest component numbers – but he was downright bad from 2013-15 with a 4.86 ERA in 383.7 innings before pitching better this year. He has trimmed his walks and upped his strikeouts en route to a 3.68 ERA in 63.7 innings so far.

His changeup has become a devastating pitch with just a .318 OPS and 61% strikeout rate. Prior to 2016, it was .633 and 21%. He’s always had strong swing-and-miss rates, but just finally turned it into some actual strikeouts. He’s not a complete game-changer, but with their bullpen they don’t necessarily need a game-changer. He’s better than 3/5ths of the current rotation and that’s true even when Gallardo returns. His home run tendencies are worrisome in Camden Yards. He’s allowed 1.2 HR/9 over his career and he’s up at 1.4 HR/9 this year.

The 29-year old righty is a free agent after this year so he won’t command a large asking price. I can’t imagine any urgency from Philly to keep him around beyond this year given the path they’re on right now. They’re building for a run so those innings are better used on a young arm who could be a key part in their next good team. I could see Hellickson costing a second-10 prospect from the O’s and perhaps deeper. Just a lottery ticket type that many of us haven’t even heard of yet.

I almost put LA’s Hector Santiago here, but the only real reason I could justify him was because of his left-handedness, something the O’s lack in their rotation. Cashner’s numbers are actually worse this year and last, but I think he’s a better bet for the change-of-scenery rebirth. There isn’t a great statistical case for Cashner turning it around. He’s already in a favorable park residing in the NL and he’s getting smashed around. But the idea is that Baltimore (or another club, honestly, I just think he gets moved) could tweak some things to get Cashner back on track.

The 29-year old righty can run it up in the mid-90s regularly and has flashed some impressive secondary stuff at times, but the fastball has flattened and he can’t get the secondary stuff, which has fallen off in the interim as well. But we’ve seen much worse cases emerge from deeper holes. Even with a mile lost, he’s still sitting 95.2 MPH on average. He has a curveball and slider. Maybe the O’s see a case to chop one and focus on the other. Or maybe they have a mechanical suggestion to get him back to 2013-14 levels when he had a 2.87 ERA and 1.13 WHIP in 298.3 IP.

Cashner is also a free agent after this season and he’s more of a fringe qualifying offer candidate given his health history and fall off since the start of 2015. Those factors would contribute to a lower cost, too. He’s probably be in the same range as Hellickson in terms of a prospect return.

Paul Sporer is currently a contributor to FanGraphs / RotoGraphs. He has worked for/still works for Rotowire, Baseball Prospectus, Rotogrinders, The Fantasy Fix, Draft Day, and PaintTheBlack.com – his own website centered around pitching. Additionally, he’s written for several Baseball Prospectus Annuals, contributed to Rotowire’s 2015 magazine, and spoken at a couple of BaseballHQ First Pitch Arizona events. His popular starting pitching guide is available at paulsporer.com.