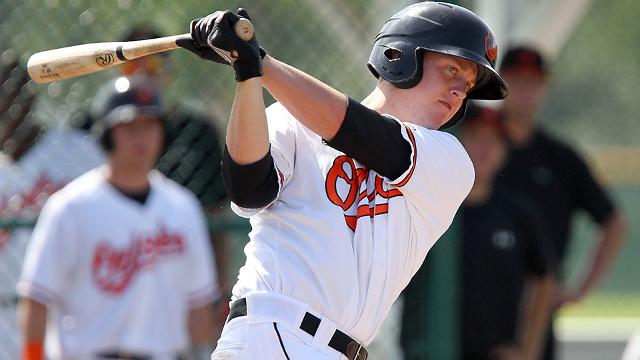 With the minor league season nearing the halfway point, here is a look at the top 15 prospects in the Baltimore Orioles’ farm system.

With improving defensive skills and a solid contact-oriented approach at the plate, Sisco stands out as one of the farm system’s most polished prospects. While he does not project to hit for power, Sisco should develop into a hitter who maintains a solid average and gets on base at a high rate. Look for him to eventually be the Orioles everyday catcher, with 2017 or early 2018 representing a realistic time of arrival.

In terms of potential, Harvey is among the top pitching prospects in baseball, but injuries have sidelined him since July 2014. He had hernia surgery in early in May, and the Orioles are hoping that he will land with an affiliate by early July. High-A Frederick is a realistic goal for Harvey, but do not be surprised if the Orioles opt to stretch him out a lower level before pushing him into the Carolina League.

Mancini’s breakout 2015 is being followed up nicely thus far, as he dominated in a short stint at Bowie before being promoted to Norfolk, where he has performed admirably over more than 30 games. Questions continue to persist about whether Mancini’s power will translate to the majors, but he shows the makings of a consistent contact hitter who should post solid on-base numbers. With Chris Davis entrenched at first base and Mancini likely limited to that position, the Orioles have to find a different way to make room for him in Baltimore, but a debut later this season is well within the realm of possibility.

Reyes has struggled in his early turns in the Carolina League, as he has had a hard time adjusting to better breaking balls against older competition. Given that he is young for the level and possesses the best raw power in the system, there is time for Reyes to turn it around, but his pitch recognition must improve over the remainder of this season. He also seems destined to move to first base, but such a transition will likely wait until at least the end of 2016.

After a slow start, Mountcastle is turning the corner against older competition in the South Atlantic League. He projects to be at least an above average power hitter, and shows strength to the opposite field. Defense is a major question mark for Mountcastle, who seems unlikely to stay at shortstop, with leftfield being the most logical destination.

With the ability to throw his fastball in the mid-to-upper 90’s, Lee continues to turn heads and has quickly become one of the Orioles’ most intriguing prospects. Upon his return to Bowie, he has displayed improved control of his three-pitch repertoire, which also includes a changeup and a slider. Lee is not striking out anywhere near enough hitters to warrant hopes for high ceiling, but he may have just enough to stick in a major league rotation, likely as a number four or five starter.

In terms of pure stuff, there are pitchers in the system who surpass Hess, but he shows some promise when it comes to sticking in the rotation. Along with a fastball that regularly touches the low-to-mid 90’s, he has displayed an improved feel for his secondary offerings, which include a slider, changeup, and curveball. Some observers still question if Hess can develop his slider and curveball into adequate major league offerings, but he has made steady progress over the past year. Like Lee, he has a chance to become a back-of-the rotation option.

After adjusting his stance in spring training, Stewart has had many ups and downs at Delmarva. While he shows an advanced control of the strike zone, he has struggled to make solid contact and his power has been short of some of his pre-draft expectations. If Stewart can start driving the ball more consistently, his overall plate approach would allow him to have a role in the majors, but he must improve over the course of this season.

Regarded as a catcher with advanced aptitude on defense, Heim has already made the leap to Frederick. Offensively, he has had his struggles this season, which fits into the profile of a defense-first catcher that some has already made for Heim. However, it is worth noting that he lost a good portion of time at Delmarva last season because of a foot injury, and the Orioles feel that he may develop into a decent contact hitter with a solid swing on both sides of the plate. Patience will be required in Heim’s development, but his defense already warrants some attention.

In terms of pure stuff, Scott is one of the most intriguing pitchers in the system, but that has yet to translate to success, mostly due to poor command. The left-hander can touch 100 mph with his fastball, which is by far his best pitch. He will need to hone his changeup and slider and work to smooth out his delivery in order to move through the system, but he shows the upside of an effective late-inning reliever.

Listed at 6’5” 195 lbs, Peralta stands out for his prototypical pitcher’s build, but his results have been striking. Thus far, he has capably handled his older competition in Low-A, flashing a solid fastball to go with a slider and changeup combination. He has room to improve when it comes to the command of his secondary offerings, but at 19, Peralta is emerging as an intriguing prospect and should continue to climb the ranks over the coming seasons.

Bursting onto the scene with a breakout 2014, Walker has not recaptured that success over the past two seasons. Some of that for can be forgiven for this year, which has been marked by a shift from first base to leftfield. If Walker can eventually adjust, there might be room for him in the majors, but for now he needs to work on regaining the consistency at the plate that made him one of the system’s best prospects just two seasons ago.

Fenter is one of the more intriguing prospects from last year’s draft class, as the seventh-round selection found success last year in the Gulf Coast League. His fastball has touched 97 mph in the past, but he displays the ability to generate a high number of ground balls and consistently throw the pitch in the low 90’s. He is likely years away—leaving plenty of time to settle the debate over whether he projects as a starter or a reliever—but he could be a name to watch at Aberdeen once the IronBirds’ season begins. EDIT: Fenter has recently undergone Tommy John surgery.

A Rule 5 pick from the Boston Red Sox in December 2014, Garcia is currently being stretched out as a starter in Bowie. He has struggled thus far, but could make for a good bullpen option down the road if he returns to a relief role. It remains to be seen how much longer the Orioles will utilize Garcia in the rotation, but his fastball and potential to develop a major league-ready slider or changeup makes him worthy of attention.

Leyva has attracted attention for his mid-to-upper 90’s fastball, and his smooth delivery. The Orioles could use him as a starter in the lower levels, but some observers feel that he might settle into a relief role and find success off of the combination of his fastball and slider. He will most likely return to Aberdeen to begin his season.