Towson Tigers’ Have Big Shoes to Fill on the Offense 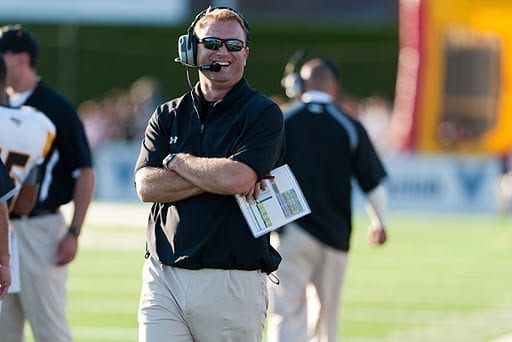 Looking to build off a promising 2019 football season, the Towson Tigers have huge shoes to fill with the departure of their former star quarterback, Tom Flacco and lead wide receiver Shane Leatherbury.

With Flacco at the helm this past season, Towson went 7-5 on the season and 4-4 in conference play with notable wins over Delaware (31-24) and William & Mary (31-10). Despite falling just short of their first NCAA FCS playoff berth since 2018, Flacco left his mark with arguably his best season with the Tigers.

Flacco threw for 2831 passing yards, 22 touchdowns and six interceptions while completing 60.4 percent of his passes. He also chipped in 324 rushing yards and two rushing touchdowns, displaying his ability as a dual threat as he led the second-best offense in the Colonial Athletic Association in terms of total yards per game.

Finishing out his Towson career, Flacco ranks in the top-6 in program history in passing touchdowns (3rd with 50), passing yards (6th with 6086) and passing completions (6th with 484). He is also the first ever Towson player to be a two-time Walter Payton Award Finalist.

As one of the most decorated athletes in program history, most would assume that a talent such as Flacco will be both easy to miss and hard to replace.

Thankfully for the Tigers, they have two redshirt senior quarterbacks who both bring different perspectives and skill sets to this Towson offense as they prepare for the upcoming training camp.

On one hand there is 6-foot-1, 220-pound Triston Harris out of Dover, Delaware. Although being a part of the Tigers’ program for the last four years, Harris has only played in two games. His most recent call to action came back in October in a 56-7 blowout win over Bucknell where he ran for 19 yards on two rushes.

Harris’ most promising performance came back in 2017 where he threw for 153 yards and ran for 22 yards. Harris has shown flashes as a dual-threat quarterback, but his lack of live reps does pose the question as to whether he is ready to take over the offense.

On the other hand, there is 6-foot-3, 220-pound Ryan Stover out of Oreland, Pennsylvania. Unlike Harris, Stover has played 24 total games in the last three years. In the last two years, he has thrown for a total of 112 passing yards and 68 yards with only one passing touchdown, but 2017 was where Stover truly shrined in the Tigers’ offense.

As a redshirt freshman, he threw for 2001 yards and 11 touchdowns while completing 55.4 percent of his passes while also leading the team in rushing with 456 yards on the ground and two touchdowns. Stover had five games with 200 or more yards, three games with multiple touchdowns passes and completed at least 50 percent of his passes in 10 of the 11 games he played. As the more proven commodity, he has shown the most productivity and has played at a high level when given the reps.

Regardless of past performance, the title of starting quarterback will come down to leadership. The Tigers are due for some significant changes with the influx of new, young talent at the wide receiver position and the loss of their lead pass catcher, Leatherbury who has gone onto the NFL to become a member of the Arizona Cardinals.

Now out of 12 receivers still on the roster, Ryan Rutkowski, Caleb Smith, and Darian Street are the only upperclassmen of the group. These three accounted for 1236 total receiving yards and only six receiving touchdowns (Street had four). They will have to collectively step into more significant roles with Leatherbury’s departure as the Tigers’ offense will also be in search of a new lead wide out.

As the Tigers’ prime themselves for the upcoming season, the decision may be the deciding factor regarding the trajectory of success for the team this season. Considering the significant loss in offensive production at the quarterback and wide receiver position along with introduction of nearly an entire brand-new receiver core.

Towson will need guys to step up in a big way if they have any hopes of reaching their first FCS championship game since 2013 and winning it for the first time in program history.