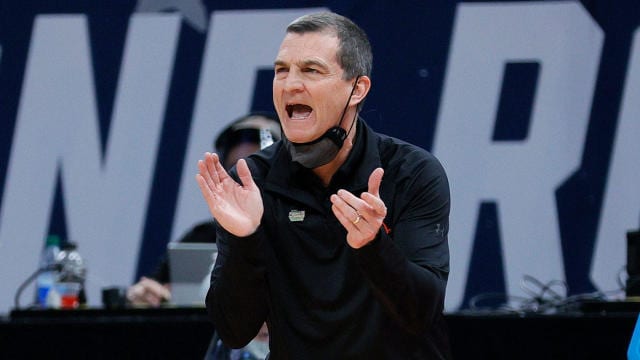 Although Maryland’s basketball season recently ended with a loss to Alabama in the Round of 32 in the NCAA Tournament, the Terps have been experiencing some big gains as of late.

Rumors of a Mark Turgeon contract extension to start the holiday weekend were parlayed with landing two of the transfer portal’s top targets — Fatts Russell and Qudus Wahab — on Saturday.

Now, with the roster being bolstered and Turgeon reportedly on board for years to come, the ink just needs to dry on the new head coaching contract and it’s back to focusing on rebuilding Maryland into a contender.

But first, let’s take a closer look at these recent developments and what they mean for the 2021-22 season.

While details are not official as of this writing, Turgeon’s contract extension is expected to be for three years with incentives. It has been reported that there will be no additional buyout in this extension.

With this type of contract, Turgeon is really betting on himself to turn things around quickly. Although the Terps made the NCAA Tournament this year, it wasn’t the type of talent-rich team that has come to be expected in College Park. To some, just reaching the postseason this year felt like a win.

But with senior Darryl Morsell graduating, it will be up to Turgeon to convince juniors Eric Ayala and Aaron Wiggins to stay as well as continue to add talent to the roster. Getting Russell and Wahab on board is a big step in the right direction, as are the two four-star forwards Turgeon has coming in next year’s recruiting class so far.

It’s suddenly looking like a much more formidable roster in College Park next year, but the work is not yet done. The rest of the spring and summer needs to include some more offseason wins for Turgeon & Co.

Terps get their big man

After narrowing down his list of schools to Maryland, Miami, NC State, Tennessee, VCU, and West Virginia, Wahab ended up choosing the Terps to extend his college basketball career.

A 6-foot-11, 237-pound center from Georgetown, Wahab will solidify the paint for Maryland next year. He’s coming off of a sophomore season in which he played 26 games and averaged 12.7 points, 8.2 rebounds, and 1.6 blocks per game. The Nigeria native shot 59.1% from the field and 67.3% from the free throw line with the Hoyas this year. His addition is a welcomed one for Maryland, which ranked last in the Big Ten in rebounding this past season.

Wahab played high school ball at Flint Hill (Va.) where he was a four-star prospect and No. 134-ranked player in his class according to Rivals.com. He was a part of the WER1 AAU program, which Maryland’s leading scorer, Eric Ayala, also played on in high school.

As of now, Wahab and incoming freshman Julian Reese are the Terps’ two newest members in the frontcourt and they’ll both likely step into large roles next season.

About an hour after Wahab announced he was on board with Maryland, the Terps landed their second transfer on the same day with Daron ‘Fatts’ Russell making it official. A point guard that played the last three years at Rhode Island, Russell excelled with the Rams and is looking to bring that talent with him to Maryland’s backcourt next season.

The 5-foot-10, 165-pound floor general chose the Terps out of a group of 13 finalists that included schools like Arkansas, Auburn, Gonzaga, Michigan, Oregon, and UCLA. Russell averaged 14.7 points, 4.5 rebounds, and 4.5 assists per game this season and became Rhode Island’s program leader in all-time assists. A year prior, Russell averaged 18.8 points, 4.6 assists, 3.4 rebounds, and 2.9 steals per game for the Rams. His 2.87 steals per game ranked second nationally. He was named both First-Team All-Atlantic 10 and All-Defensive for his conference team that year.

He’ll give the Terps another reliable ball-handler on the roster and eliminate the need for Hakim Hart to spell Ayala in that regard, which proved to be disastrous at times this season.

Russell is considered to be one of the best perimeter defenders in college basketball and, along with Wahab, gives Maryland a boost defensively. He and Wahab will fit in perfectly to Maryland’s halfcourt style of play and will add to the toughness and experience of the roster as a whole.

The Terps were already one of the best defensive teams in the country this past season. And while much of that had to do with Big Ten Defensive Player of the Year Darryl Morsell, who will not be back, returning most of the roster and bringing in players like Wahab and Russell will go a long way in Maryland accomplishing what it wants defensively next year.

A Philadelphia native, Russell played at Imhotep Charter, which also produced current Terps forward Donta Scott. He graduated from Imhotep as the school’s all-time leader in points, assists, and steals.

It will be interesting to see where Maryland’s roster stands entering next season after some players — Wiggins and Ayala — test the NBA waters and Morsell decides if he’ll come back for a fifth year or play ball overseas. But as of right now, it looks like both Russell and Wahab will have a good chance to crack the starting five in the 2021-22 season.