Turgeon’s Exit; And What Comes Next 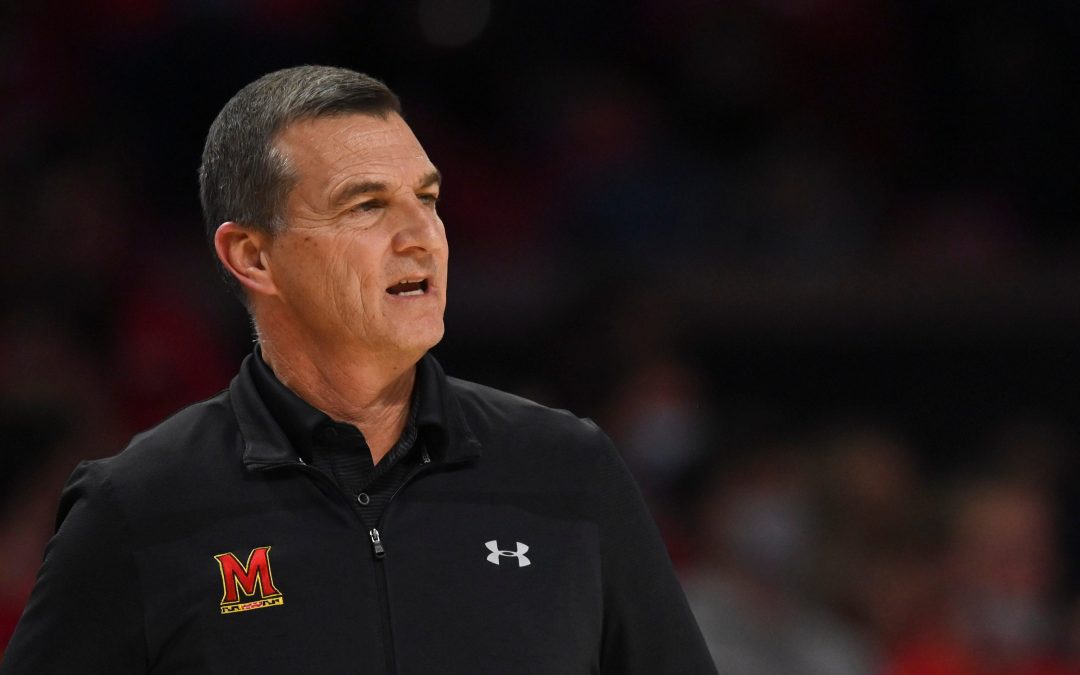 As Chris Knoche told me on the Pre-Game Show on Sunday on 105-7 The Fan before the Northwestern game that you never really know what is going on behind the scenes unless your apart of it. Was I surprised by Mark Turgeon and the University parting ways on Friday? Yes, given the fact it was so early in the season and Turgeon had a revamped roster with several transfers. Many of us figured it may take some time for the players to gel and adjust to the Turgeon way of playing ball which demands playing very good defense and is much more half court oriented offensively than a run and gun style.

Initially I thought, why would you sign him to an extension just to let him go 8 games into a season. Doesn’t he deserve a full season or at least half of one to see if he can get this team going and into stride by Tournament time? It seemed to me foolish by the University and AD Damon Evans to cut him loose this fast. The same issues you had with him several months ago are no different now then they were then. However, as you read more stories outside of the press release which said it was a “Mutual Decision” it seemed like this was much more on Turgeon’s part than Maryland’s. In talking with someone who has familiarity with Turgeon they believe it was all him and not the school. In fact, they believe it was childish to walk out on the team just because the media & fans were not showing him enough love and appreciation. That person I talked with believed that is why he left. There was a story that reported he said he could not continue to coach and recruit successfully in this environment. If that all is true, then of course it was wrong of him to do so. You owe it the whole team but especially the transfers you sold on coming into College Park to stick it out for the year. Now I do certainly subscribe to the fact that if you are truly not all in than it’s not fair to the players and your assistants to half ass it. But then the question is why aren’t you all in, are they legit or selfish reasons?

You could argue by leaving now, he did the team a solid by helping the rest of the staff salvage the season. Although there is a lot of work especially for the transfers that goes in prior to a season starting in learning a different style and way things are done. You can’t just undue things at the flip of a switch not this is rocket science either I get it. Eight games are 25% of the schedule, those 8 games will certainly have some impact on a possible NCAA Tournament berth. Ultimately, I feel he should have stayed and worked it out and that leaving his team behind was wrong on many levels. I will stand corrected if this was equally the school’s doing but I do not tend to believe that was the case. Now I can tell you Evans is not a huge fan of Turgeon and the two sparred on the toughness of Maryland’s non-conference schedule, but Turgeon’s new deal really was to the benefit of both parties. It made no sense for MD to cut ties like this. Fans booing a coach or even wanting to see that coach fired is nothing new and comes with the territory. Sure, Turgeon is not paid in the Top 10 in the sport, but he is far from going hungry and to the average fan much better compensated than most.

The fan base had grown tired of the lack offense, the lack of excitement and the lack of up until this season a better non-conference schedule that motivated fans to come to more games. For a while, the record against ranked opponents and ranked opponents on the road was poor although he started to reverse that in the last few seasons. Most glaring was the Conference and NCAA Tournament resume which mostly lacked. He really needed that opportunity with the 2019-20 team to try and change the narrative but never got it due to Covid. Last season losing to a football school in Alabama, in fact getting blown off the floor did not help matters.

As I always like to say there are expectations and then there are realistic expectations. Generally, I like to say that MD should always be in the Top 25 and 4 out of every 5 years going to the NCAA Tournament with some Sweet 16 runs. The basketball landscape has gotten even tougher in the last few years with the transfer portal and more schools looking to beef up or make inroads in Football and or Basketball to drum up more attention for their school and bring in more dollars in donations. There is a so much more parity than there used to be, ask any Coach. I don’t think some fans realize how much tougher it is to win today, the pressure may be the same, but the task is much tougher than it used to be.

The things you must ask yourself about the job though are this:

How well does it pay?

Does the area have good high school recruits?

How are the facilities?

How good is the Conference?

How good is the Athletic Director?

How supportive is the Administration of the Athletic Program and how it relates to academics?

*I can only give answers to some of these given my position.

The job does not pay as well as some of the upper echelon schools however given the amount of Big Ten money they receive; this should be less of a problem than it was, so I get baffled sometimes by hearing about the pay issue. Now I know Covid did not help matters in the last year and Football makes money but if it were more successful it could garner a lot more outside of Conference revenue.

Yes, the DMV and the Baltimore Metro are talent rich areas when it comes to recruiting high school players.

The Xfinity Center is a really nice facility to play in, but the school still needs to build a basketball facility. They are one of the few Power 5 schools not to have one.

College Park, Maryland is in the DC Metro, a Top 10 Market in the country and just up the road is Baltimore a Top 25 market so if you do well you will get plenty of attention.

The Terps are in a Power 5 Conference—yes, the Big Ten is considered a Football Conference but they boast some very good basketball too with the likes of Michigan State, Michigan, Wisconsin, Ohio State, Indiana, Illinois, Purdue and Iowa. It more than holds its own. In fact, right now Purdue is the #1 team in the land.

I cannot comment on the Athletic Director or the Administration, you will have to make your own mind up there.

Pay will always come first with Coaches but outside of that recruiting area and AD/Administration are the most important. If you do not have enough backing or resources than the rest of it doesn’t matter.

This is not a steppingstone job unless you get an offer from Kansas, Kentucky, North Carolina, Duke or UCLA. While I would have no problem with Brey or Beilien who I really like and would fit the school well, either would be a short-term solution given their age. Ideally you have a mid-40s type coach that connects with the young players, is good at finding some diamonds in the rough and can overachieve to a degree with his talent as you will not be able to get just any player into the school. There are standards. You still need to be able to recruit well but you are not going to get a steady stream of 4 and 5-star guys. Establishing a better pipeline with some of the local high school powers is important and we simply have not had that in some time. MD seems to better recruit in Philly than the DMV. That must change.

I am hearing Seton Hall Head Coach Kevin Willard’s name come up a lot and I am told that’s not just media guessing. We shall see on that end. I do believe Turgeon’s success was not appreciated enough due to the grind it out style of play and the lack of Tourney success. Sometime will need to pass for fans to see what he did accomplish. The Maryland fan base at this point does deserve the opportunity to see if a fresh change can elevate the program to the level it has achieved in the Lefty Driesell and Gary Williams days. I am fine with that in fact I wrote as much several months ago.

Whoever the next coach is will tell us a lot about the floor and ceiling of this program given all its present circumstances.