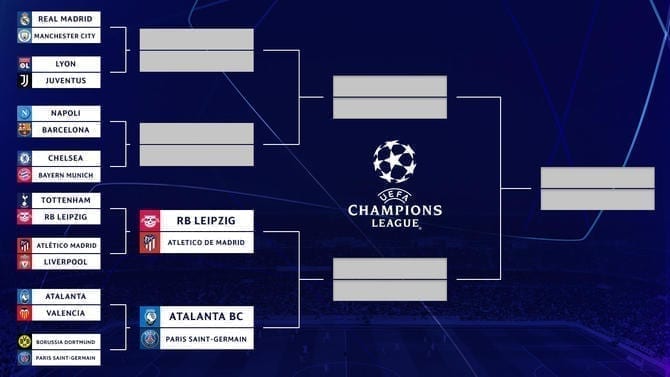 While the Covid-19 pandemic has wrecked havoc across the planet, perhaps no sector has been more impacted than sports. Certainly, the impacts to everyday people have been terrible. Loss of life. Loss of jobs. Business closed with many to never open again. But to a lot of people, what really hit home was the lack of sports. Shuttered at home was tough in itself but not having sports to watch just magnified the pain. Thankfully, sports are returning, at least in some semblance of normalcy and soccer has been leading the way. All of the big five European leagues were able to finish their seasons with the exception of the French Ligue 1. MLS has returned with a unique tournament that will play out as not only a stand alone tournament but also count as part of the regular season. And with the completion of the European leagues the timing is right to be able to finish the 2019-2020 UEFA Champions League.

The UCL was shut down in mid March and will return this week. When suspended, the league was halfway through the second legs of the Round of 16. To complete the Round of 16 four second leg matches will be played this Friday and Saturday at the normal venues of the home side. Lets start by taking a look at those four matches.

The bad news for Lyon? Well its pretty simple. They have not played a competitive match since March. Secondly, they don’t have Cristiano Ronaldo. Its just going to be really tough for a team coming off an almost 5 month layoff to play well even against a team who hasn’t been particularly strong lately.  Look for Juventus to win this one and move on.

This one is must see soccer. Man City won the first leg at Real 2-1 giving them a huge lead going into the home leg. And Man City has been playing really really good soccer having gone 4-0-1 in their final five EPL matches outscoring their opponents 16-3. But not to be outdone Real has gone 4-1-0 in their last five La Liga matches outscoring their opponents 7-4. The biggest knock on Man City this past EPL season is that they did allow other top clubs to beat them, in fact the other top 6 finishers in the EPL all beat Man City this past season. They have struggled at times to keep good scoring teams from running through their central defenders.

Unfortunately for Real is that they not only have to win but they have to do so by two goals more than they allow City to score. And perhaps the killing blow is that key defender Sergio Ramos is suspended for the match. I just don’t see how they are going to keep City off the scoresheet. I think the match may be close but in the end I think City wins at home and moves on.

Just move on here. Bayern won the away leg 3-0. They aren’t losing at home by 4 goals. Not happening. Unfortunately for US fans this game could have been fun to watch. Christian Pulisic has been in world class form since the restart of the EPL and helped guide Chelsea to 3rd in the EPL and a berth in this next UCL. And he came out on fire in the FA Cup final on Saturday putting his team ahead early in the match. However, early in the second half he drove by two defenders and cut into the top of the penalty area and tore his hamstring. Some how he managed to take a couple more steps and pull off a shot before collapsing in agony. He is clearly not playing this week. The question for him will be how long will he be out?

Barcelona hosts Napoli on Saturday after tying the away leg 1-1. Even though they got drew they scored that all important away goal. Both teams have been playing reasonably well of late with Barca finishing up their La Liga season going 4-0-1. Napoli finished up their Serie A season going 3-0-2.

Napoli is a stong defensive team, typical of play in Italy, while Barc is one of the best possession teams in the world. Simply put Barcelona makes you beat them. They don’t make mistakes and they are deadly finishers. And they have Lionel Messi. This should be a close tight match but look for Barcelona to break down the Napoli defense in the second half and win 2-1 and move on.

So that sets up the quarterfinal rounds. What makes this really interesting is that they just isn’t any break from here on out with the Quarterfinal Round to run August 12-15, the Semifinals are August 18 and 19 with the Final being held on August 23. While this is a very tight schedule since, all quarterfinal, semifinal, and final matches are held in Lisbon, Portugal. So there will be no travel involved and teams will be able ti play in a bubble like being done for the MLS is Back Tournament. So with the expected results from the second legs of the Round of 16 lets look at the Quarterfinals.

PSG was destroying Ligue 1 when it was shutdown back in March. In fact they had scored 13 goals in their last three Ligue 1 matches. And they recently won the French Cup. But that French Cup win has been their only competitive match in the last five months. They looked strong defensively but struggled to put together much in the attacking third. Atalanta meanwhile has finished out the Serie A season going 2-2-1. However, they only scored five times in that span while allowing the same number of goals. This match may come down to fitness. If PSG has been training hard and playing in house scrimmages they will be a tough test for Atalanta. Atalanta will have a hard time finding the back of the net. Certainly don’t expect them to score multiple goals. This means they are going to have to shut down the PSG attack. Just don’t see how they keep PSG from scoring multiple goals.

This one is about as close to a toss up as you can get. The betting sites all have this game as pretty much even. The fan predictions literally have this as 50-50. Atlectico took 3rd in La Liga. Leipzig took 3rd in the Bundesliga. Atletico scored 51 goals and allowed 27 during their league season. Leipzig scored 81 times while allowing 37.

So that last data point would seem to indicate that perhaps Leipzig has a somewhat better attack and have a leg up against Atletico. However, its also important to note that the Bundesliga is also the highest scoring league overall when compared to the EPL and La Liga. If you’d like to read an interesting article comparing the quality of those three leagues here’s a link.

So what does all this mean with respects to this match? Not much. This should be a close match right to the end and don’t be surprised if it goes to penalties. This one’s truly a coin flip so I am flipping heads for Leipzig. Bottom line is that they have Tyler Adams (USMNT) and I’d rather see a US player advance.

Now these next two matches are predicated on me having the second legs of the Round of 16 correct. So keep that in mind.

Two giants in the soccer world. Barcelona with its insane possession and its ability to pass the ball at will all over the field. Bayern Munich who just won their 8th straight German title and come in with a 5-0-0 record. A Bayern team that can score in a heartbeat from just about anywhere. They may have the best attack of any team left in the tournament (certainly top three alongside Man City and you guessed it, Barca). This game will be intense from the opening kickoff. Expect Barcelona to control the ball and look for openings in the final third. When Bayern gets the ball they will push and push some more. If Alfonso Davies, the 19 year old Canadian winger, can use his speed to get behind the Barca defense look out. That will draw the Barca defenders wide creating space in the area for Robert Lewandowski. And if he gets the ball in space its going to hit the back of the net.

But the German side has to get the ball first to be able to do that. Look for Barca to pass the ball around and around and around. They are very good at sensing when an opponent has been lulled to sleep and then slip the ball inside to Lionel Messi or Antoine Griezmann. They don’t miss much either. But here is what really kills opposing defenses. Messi is so good on the ball that when he gets near the area he can dribble around numerous defenders. Several things happen when he does that.

1) Eventually he loses the ball.
2) He finds a passing lane to an open player.
3) He finds an open shooting lane.
4) He draws a free kick.

Here’s the deal. Three of those four things are bad for the defense.

So how does this go down? Do not miss this one. Its going to be a classic match and we should see numerous goals scored. In the end?

Prediction – Bayern wins because of a goalkeeper named Manuel Neuer.

Juventus just won the Serie A league. For the 9th straight season. No that is not a misprint. Nine in a row. And you thought Bayern Munich’s eight in a row was crazy. Juventus scored 76 times while allowing 43. Man City is flat out a scoring machine tallying 102 goals during the EPL while only allowing 35. Think about this for a minute. They score an average of 2.7 goals/match while allowing 0.9 goals/match. Their AVERAGE margin of victory is an insane 1.8 goals/match. Juventus of course has Ronaldo and he is a big time player who loves to play in big matches.

City will attack with a front line of Raheem Sterling, Sergio Aguero, and Riyad Mahrez. Juve will counter with Ronaldo, Paulo Dybala, and Gonzalo Higuain. Lets call that even with a slot nod to City. On defense City relies heavily on Kyle Walker and Benjamin Mendy while Juve will post up Alex Sandro and Matthjis de Ligt. Lets call this even with a nod to City. In front of the net City’s Ederson is better than anything Juve can put out there but not by a ton.

This is going to be a close match but we have to I have to pick a winner right?

Prediction – Man City wins and if you were paying attention you saw a huge name missing from City’s potential midfield. Yeah that guy from Belgium. Kevin De Bruyne is the difference maker in this one.

So just five days away from the best soccer on the planet returning for what will be two weeks of great soccer. Then it will be just two months before UCL 2020-2021 begins with group play starting in October!!