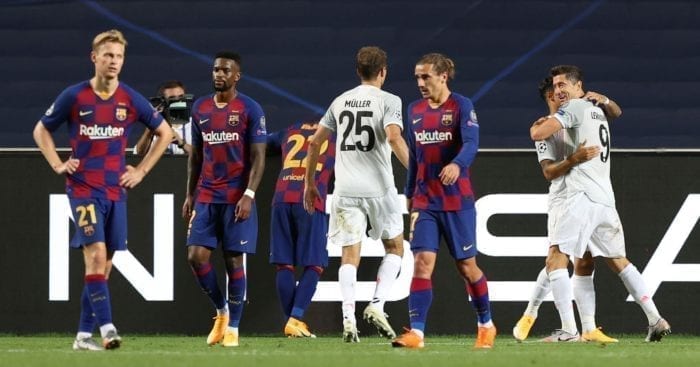 Benfica Stadium in Lisbon, Portugal has seen many top flight soccer matches over the years. But its doubtful that they have seen the amount of craziness in a short stretch of time as they have the last week. And with two more matches to be played ….well perhaps the craziness is over?

The 2019-2020 UEFA Champions League has been weird to say the least. Of course, the first and obvious was the they had to stop playing for the better part of 5 months due to Covid 19 virus. Then once play did resume, it was in stadiums typically holding 50,000+ fans that were empty. Hard to say how much impact playing in empty stadiums had on the actual play but certainly there was some. Players in all sports respond to the crowd which just wasn’t an option here.

Then we got to the Quarter Finals and the craziness continued with some unexpected results. Certainly when you get to a win or go home scenario things happen. Sometimes the ball takes a crazy bounce. Sometimes, and this is especially a high potential in a low scoring sport like soccer, a bad decision by the referee team can affect the outcome. Sometimes a team just plays over their head.

One last crazy factoid:  This is the first UCL that has not had Lionel Messi or Cristiano Ronlado in the Semi-Finals since the 2004-2005 season. Thats 15 years. Let that sink in a minute!

Lets take a look at the Quarter Final craziness.

The craziness kicked off with the first Quarter Final match. PSG was heavily favored having just won the French Ligue 1. Not that Atalanta was a weak team. They had a stout attack and lead the Italian Serie A in goals scored. But they had a fairly weak defense and the general school of thought was that they simply couldn’t not contain PSG with Neymar and Killian Mbappe. Well the pundits were wrong. Until they weren’t. Atalanta scored the opener in the 28th minute and held PSG at bay. While PSG had possession and was getting some shots, they were mostly from distance and well defended. As the minutes wore on it looked like Atalanta was going to pull off the upset. Then in the 90th minute PSG scored and seemed to be sending the match to 30 minutes of extra periods. Oh but not so fast. In the third minute of extra time they scored again sending PSG on to the semis. Where was this one played? Benfica.

Going into this match, this was pretty much a pick em. Madrid allowed a stingy 27 goals in their 38 La Liga matches while Leipzig scored 81 while allowing just 37, second fewest in the German Bundesliga. Back a couple of weeks ago I suggested this was just a toss up but was hoping for a Leipzig win since they have Tyler Adams, midfielder for the USMNT. I was disappointed to see that he didn’t get the start but hopeful he get some minutes in the second half.  And indeed he did come on in the 72nd minute with the scored tied 1-1. Then in the 88th minute this happened!

Leipzig moves on with Tyler’s game winner….Tyler you owe me a beer!

A classic matchup of two of the top club teams in the world. Possession based Barca who pass the ball all over the field against the constant press and attack of the Bundesliga Champions. Predicted to be a tight match with lots of action. Well half right. This match was loaded with action from the opening kickoff to the final whistle. The problem for the Spanish Champions is that they had no answer for Bayern’s attack. None. They were simply unstoppable. In the end Bayern crushed Barca 8-2. While many thought this could be a high scoring affair  nobody saw this coming. This was much like the German’s demolishing home team Brazil 7-1 in the 2014 World Cup. Bayern had 26 shots (13 on target) and 9 corner kicks. And they had slight advantage in both possession and passing accuracy. This just does not happen against Barcelona. Except that it did. So while the result wasn’t crazy the match sure was.

If I had to pick one word to describe this match? Insane. Enough said. Oh yeah another match held at Benfica.

Easy match to handicap. First off Lyon wasn’t going to get past Juventus. Having not played a competitive match in 5 months and going up against Juve having just won their 9th straight Seire A title. Not happening. Oops. They did manage to get by Juve. Well not to worry. Man City actually now has an easier path forward. Oops again. Who was the better team on the day? Man City by every metric but one.

They out shot Lyon 19-7. They had a 67-33% possession advantage. The had 11 corners to Lyon’s 3. Unfortunately for Citizen fans, they lost the only stat the really matters. The final score. So how did Lyon win this one? Frankly, I have no idea. Its not like Lyon came up with some super strategy to keep the ball away from City or to keep them from getting chances. They didn’t. And City had a lot of possession in the final third and in the Lyon penalty area. But somehow the Lyon defenders managed to keep the ball out of their net.

One word to describe this one? Weird!

So its on to the Semi-Finals. Will the craziness continue? Man I sure hope so as this has been fun to watch. Here’s a snapshot of this weeks matches.

The good news for Leipzig is that this is being held on Tuesday at Benfica. Maybe the craziness will continue? As for the actual match, lots of storylines. This is only Leipzig’s second trip ever to UCL and they already have a shot to make the final. PSG has been here 12 times before this season and have never been to the final. Interesting to note that Leipzig has only existed since 2009. No that is not a typo. In fact, they have only been in the Bundesliga since 2016!! They are playing with a lot of heart but this is probably the end of the road. PSG will have Angel Di Maria back from card suspension and Mbappe will probably be in the starting lineup. And Liepzig was struck a significnat blow when they announced that star striker Timo Werner was transferring to Chelsea. With the early announcement, Werner decided to sit out the rest of the season. You just don’t replace a world class striker.

Look for PSG to move on. But hey I am still pulling for Tyler and Red Bull!

End of the road for the fairy tale story of Lyon. They just aren’t not going to keep the Bayern juggernaut off the board. While they shouldn’t take Lyon lightly here’s some latest form data on the Bavarians.

1) They are undefeated in their last 19 matches across all competitions.

2) They have scored 39 goals in just 9 European matches. Better than 4 goals/match. You don’t lose at this level when you do that.

3) They are 4-1 favorites across all betting lines.

Now Lyon will provide some moments of their own. But they aren’t going to keep Bayern to fewer than about 3 goals and they won’t score that many. Really, about Lyon’s only chance is for goalkeeper Anthony Lopes to have some crazy match ala Tim Howard against Belgium in the 2016 World Cup. Timmy set the World Cup record that night with 15 saves. Can Lopes pull off something similar? Nope….well wait this is 2020.

So I am calling it now. Bayern is going to win the title. Doesn’t matter who they play in the final. They are just too good.