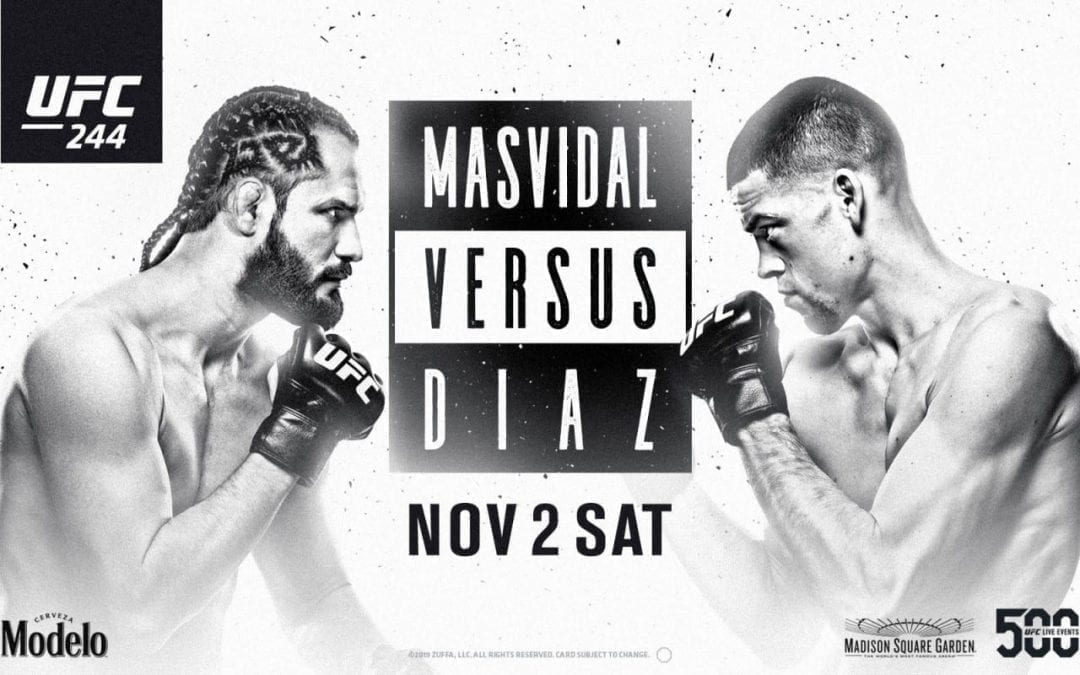 For the longest time while he was on a three year hiatus following his historic rematch with Conor McGregor, Dana White kept insisting that Nate Diaz wasn’t a “needle mover”. It seemed clear that his already iconic personality combined with his feud with the biggest star in MMA history had pushed him into the upper echelon of marketable fighters on the UFC roster but I guess the theory was as the B-side in those fights those record breaking pay-per-view sales for UFC 196 and UFC 202 wouldn’t translate with him as the A-side. It took some convincing but the UFC has finally come around to the idea. Diaz was originally scheduled to fight Dustin Poirier at Madison Square Garden on UFC 230 last November but the fight fell apart due to injuries. The response to the making and cancellation of that bout should’ve been a sign but Nate finally made his return at UFC 241 as the co-main event against Anthony Pettis and it was clear he was the reason people were excited for the event despite the heavyweight title being on the line in the main event. The easy call out would’ve been for the McGregor trilogy fight but instead he opted to call out Jorge Masvidal, who himself finally broke through to the mainstream after knocking out Ben Askren in five seconds with a flying knee. Dana finally admitted at the post fight press conference that Nate Diaz is, in fact, a needle mover.

So much so that he is headlining one of the biggest PPV events of the year in a non-title fight. Its the first time that has happened since McGregor/Diaz 2 in August 2016. Actually I’m mistaken, there is a belt on the line. The ‘Baddest Mother F***er’ belt that Diaz created out of thin air in the same post fight interview where he called his shot on his next opponent. And for the first time ever the UFC is running with a completely fabricated belt just because everyone wants it so bad. They’re even going to present the winner with an actual physical representation after the fight with Dwayne ‘The Rock’ Johnson scheduled to wrap it around their waist. Nate made more history last week when he announced on Twitter that his fight with Masvidal was off due to a positive drug test. He maintained his innocence and demanded that USADA clear his name or else he wasn’t showing up despite no suspension having been announced. And they did exactly that. Its not surprising given that this is the same promotion that moved an entire event to a different state on a week’s notice to save a lucrative PPV when Jon Jones tested positive for picograms of the M3 steroid metabolite. What it does say is that Nate Diaz is not only a needle mover but one of, if not the most, important fighters on the roster when it comes to the UFC’s bottom line.

As for the fight itself between Diaz and Masvidal, it should be a good one. Both of them are fairly similar fighters in skill as well as personality. The UFC is promoting this as East vs. West with Masvidal representing Miami, Florida and Diaz hailing from Stockton, California. They both make their bread and butter striking on the feet. Diaz with more volume, Masvidal with more power. Both are tough as hell with underrated jujitsu. Masvidal might have more of a wrestling game but I doubt its going to come to that. With Nate knocking off any ring rust he might’ve had following a three year layoff in his last fight and turning around three months later I think he will edge out a close, competitive decision that fans are going to love. At the same time Masvidal is on a roll with back to back knockouts of Darren Till and Ben Askren. One of the reasons this card is so great is because outside of the fights being important they’re also coin flips for the most part as far as who I think will win.

Kelvin Gastelum vs. Darren Till

UFC 240 is loaded with great, consequential non-title fights and the co-main event is certainly one of them. Gastelum is coming off of his fight of the year contender against Israel Adesanya for the interim middleweight championship where he lost via decision. Till is making his middleweight debut after suffering back to back losses for the first time in his career. He was submitted by then champion Tyron Woodley in the second round and then turned around six months later only to be knocked out by BMF top contender Jorge Masvidal in the second round. Gastelum was a welterweight who had trouble making the weight as well but he is still an incredibly tough draw for Till in his first fight in the division. Kelvin is a strong wrestler who has developed some excellent boxing. Till has good striking too and potentially more power with the added weight but until I can see it in practice I would suspect the more established middleweight will be victorious.

An important welterweight affair takes place here between two guys whose momentums are going in complete opposite directions. The former title contender ‘Wonderboy’ has lost three of his last four. Since a draw in his title fight with Tyron Woodley three years ago he has lost the rematch by decision, defeated Jorge Masvidal by decision, lost a controversial decision to Darren Till, and got knocked out by Anthony Pettis despite winning up to that point. He really needs a win here if he wants to make another run at the belt. On the other end of the spectrum is Luque who is on a six fight winning streak and has won 10 of his last 11 fights. His only loss over that span is to Leon Edwards who is very likely to be the next welterweight title contender. Unfortunately for him the UFC has never really given him the step up in competition that he deserved (until now) so the biggest name on his resume is Mike Perry who he beat by split decision in August. Luque’s power is very dangerous and he could be a title contender one day soon but I’m not sure about this matchup. Thompson should be able to keep him at range and use his kicks and counter punches to win a decision.

The New York crowd should be very familiar with Lewis. He earned his title fight against Daniel Cormier (which also took place at Madison Square Garden last year) coming right off of his knockout of Alexander Volkov. But more importantly that was the moment that ‘The Black Beast’ went viral telling Joe Rogan he took off his shorts after the fight because his “balls was hot”. Unfortunately he lost that title fight to DC as well as his next fight against Junior Dos Santos. He has another tough test in Ivanov. Blagoy also lost to JDS (by decision) in his UFC debut but came back to beat Ben Rothwell and Tai Tuivasa in his two fights since then. Hes a technical striker if not the most dynamic or athletic. Hes also incredibly tough. If the fight reaches the judges it should be Ivanov’s hand being raised but Lewis has stupid power and can hit a homerun at any time.

This pay-per-view curtain jerker was one of the last fights to be announced for UFC 240 but what a fascinating match it is. It is pretty much a lightweight version of the Thompson/Luque bout. Lee plays the role of the veteran who is clearly very talented and its easy to see him putting everything together and making a run for the title but is on a rough skid that puts him in danger of becoming irrelevant, at least for a while. He lost an interim title fight to Tony Ferguson two years ago, came back and dominated Edson Barboza (despite a scare in the fourth round), but then lost to Al Iaquinta for a second time before getting submitted by Rafael Dos Anjos in his welterweight debut. Gillespie is the undefeated prospect who hasn’t fought anyone that could test his skills until this weekend. Both are tremendous wrestlers. ‘The Motown Phenom’ has a power and size advantage but Gillespie has a much better gas tank. If it was a five round fight I would favor ‘The Gift’ but since its only three I will give Lee a slight advantage.

Johnny Walker came into the UFC like he was shot (take one for every whisky reference you hear on Saturday night) out of a cannon. He has three first round knockouts over progressively tougher competition in his first three fights. Those fights lasted 2 minutes and 48 seconds combined. The last two coming to a grand total of 51 seconds. The last one was a ridiculous flying knee over Misha Circunov but then he proceeded to injure his shoulder while doing the worm in celebration. Even so he could cement a title shot with an impressive win over Corey Anderson here. That is certainly possible since ‘Overtime’ (formerly ‘Beasting 25/8’, RIP) has three knockout losses in his career, all in the UFC. But hes also a grinding wrestler which seems like the perfect strategy to stifle Walker’s flashy striking. Anderson is on an impressive three fight winning streak in the light heavyweight division with decision wins over Patrick Cummins, Glover Teixeira, and Ilir Latifi. If he can knock Johnny Walker back and derail his hype train he could be in line for a shot at Jon Jones or perhaps he might need to ask for a refill against Dominick Reyes while Jones chases a super fight.