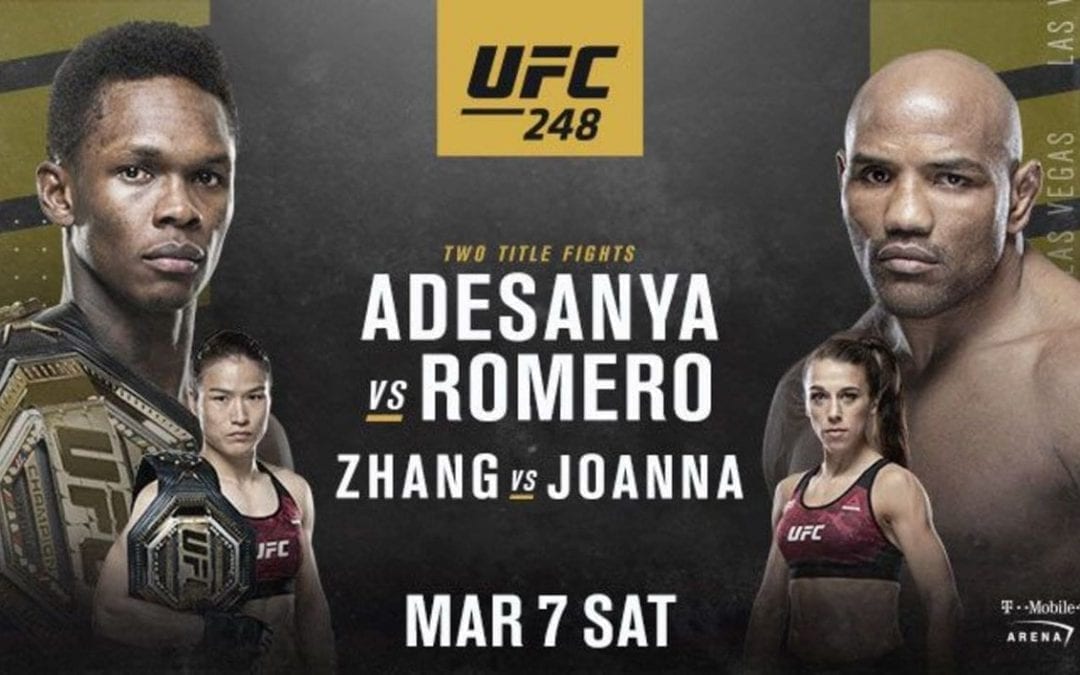 Its not very often that a fighter on a two fight losing streak (and having lost three out of four) gets a title shot and rarer still that its arguably the most deserving challenger. But that is indeed the case as middleweight is in a weird spot after interim champion Israel Adesanya knocked out Robert Whittaker in the main event of UFC 243 to become the undisputed title holder at 185 pounds. Yoel Romero gets the nod in The Last Stylebender’s first title defense despite losing very close decisions to Whittaker and Paulo Costa in his previous two fights. That was his second close loss to Whittaker over five rounds, both wars. I thought the rematch should’ve been a draw at the least while most MMA journalists had the fight scored in Romero’s favor. When it comes to Costa, scorecards were split down the middle. But the reason the Brazilian isn’t fighting in the main event this Saturday at UFC 248 is due to injury and the champion didn’t want to wait for him which is his right. The only other options would’ve been Jared Cannonier who is on an impressive three fight winning streak since dropping down to middleweight, Kelvin Gastelum who had the fight of the year against Adesanya in their fight for the interim belt, and Darren Till who just beat Gastelum in his middleweight debut. The downside is Cannonier hasn’t tested himself against top five level competition yet and recently injured himself, Gastelum is on his own two fight losing streak after losing to Adesanya and Till, and Till was forced up a weight class after losing two in a row at 170 pounds.

Jose Aldo is another guy reportedly getting a title shot (at bantamweight) coming off of a two fight losing streak. The difference in that case is that there are multiple deserving challengers who are willing and ready to take on champion Henry Cejudo including the person who just literally beat him in a close split decision, Marlon Moraes, but thats an issue for another time. As for the fight itself on March 7th between Adesanya and Romero its a very hard bout to predict. Izzy has the style and the skills to win a striking match and take the decision by sticking to the outside. The problem is Romero is essentially The Incredible Hulk, just a beast of a man who is seemingly impossible to knock out. Hes also an Olympic level wrestler and incredibly strong. He also brings out his offense in bursts with powerful strikes of his own and knows when to push the pace late in fights. Both guys have paths to victory but even though Romero looks like hes in his prime I will predict that at 42 he has slowed down just enough to give Adesanya the edge. That is despite him doing a backflip into a split while wearing tight jeans during their face off at the pre-fight press conference.

In the co-main event is another tantalizing title fight between two entertaining fighters. Strawweight champion Weili Zhang’s first title defense after shockingly knocking out Jessica Andrade in 42 seconds in her home country in late August is against former long reigning champion Joanna Jedrzejczyk. Everyone knew Zhang was a tough out at 115 pounds after beating tough competition like Tecia Torres and Jessica Aguilar. Some people predicted that she could take the belt from Andrade but nobody predicted that she would do it the way she did. It will be interesting to see if she maintains that knockout power and aggression moving forward or if it was mostly a product of necessity against the aggressive style of Andrade. The problem for the rest of the division is that even if the latter is the case she still has the skills to win in other ways. She has great jujitsu as shown by her seven wins via submission to go along with her 10 knockouts and three wins by decision. She hasn’t lost since her MMA debut in 2013, reeling off 20 consecutive victories heading into Saturday night. It will be an interesting chess match against the crafty striker Jedrzejczyk.

Joanna has had an interesting journey over the past few years following the loss of her title to Rose Namajunas. She faced her first adversity since winning the UFC strawweight belt in her eight professional MMA bout and defending it five times including one being against the aforementioned Jessica Andrade. After getting shockingly knocked out by Thug Rose and then losing a close decision in their rematch five months later she got a win under her belt against Tecia Torres before taking an opportunity to chase the flyweight championship against Valentina Shevchenko. Her size disadvantage proved to be too much and she got beat up pretty good losing that fight. After a 10 month hiatus she came back down to strawweight and knocked off one of the top contenders, beating Michele Waterson by commanding decision. With Andrade taking the belt from Namajunas and then Zhang taking the belt from her suddenly there was a fresh match-up for Jedrzejczyk to re-enter the title picture. Joanna doesn’t have the power that Zhang possesses but she appears to be the more technical striker and has underrated takedown defense to be able to keep the fight standing. To me it will come down to Joanna being able to avoid and/or withstand Weili’s power shots and I do believe she will do so and become Joanna Champion once again.

There are some other interesting fights on the undercard of the event. Sean O’Malley finally makes his return to the Octagon after a long battle with USADA over what amounted to contaminated supplements. Unfortunately for him he doesn’t have the cache of a Jon Jones to get immediately cleared so he actually had to go through the arduous process of proving his innocence. He last fought almost exactly two years ago when he beat Andre Soukhamthath by decision on a bum ankle and then had that memorable interview with Joe Rogan while lying on his back. Luckily he is only 25 so he can get right back on track after working on improving his skills for two years against Jose Alberto Quinones. Neil Magny is also returning from his own USADA suspension to take on Li Jingliang in what is sure to be a violent contest. Magny last fought 16 months ago when he was knocked out by Santiago Ponzinibbio. He will never be a top contender at welterweight but is an important gate keeper to see who belongs in the top 10-15 range of the rankings. A few other fights to keep your eye on are Beneil Dariush vs. Drakkar Klose, Alex Oliveira vs. Max Griffin, and Deron Winn vs. Gerald Meerschaert.