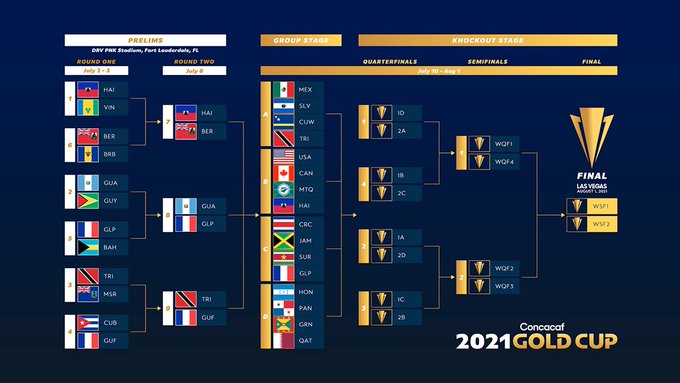 On September 2nd, the USMNT will start the final qualification stage for the World Cup 2022 in Qatar. This match against El Salvador will be followed closely with a matches versus Canada on September 5th and Honduras on September 8th. This series kicks off what is being referred to as the Ocho. Eight teams will play a round robin home and home series to determine the top three teams which qualify for Qatar directly and a 4th team which enters an inter-federation playoff. Don’t look know but this compressed qualifying schedule starts in two months!

Great, so what does this have to do with the Gold Cup? Well in a word, everything. While lots can happen between now and WC 2022, most countries have a core roster fairly well determined, including the US. The problem is that the compressed qualifying schedule means that we are going to need a much deeper roster than just a 23 game day roster. Very few players, excluding keepers, can play 3 90 minute matches in the span of 7 days. At least not at the performance level needed. So squad depth and rotation amongst these matches is going to be a critical step for the coaching staff to navigate. And a big step in that is the Gold Cup which starts this Saturday (the US’ first match is Sunday). The staff made a decision several months ago that they would use the CONCACAF Nations League for their “first teamers” (mostly European based players) and the Gold Cup for their “B” teamers (mostly MLS based players. Many fans get way too caught up in those designations and fail to recognize that players can and do move between those rosters depending on form, club needs, and several other factors. The simple fact is that we are going to need plenty of so called B teamers to help us through qualifying. (This approach also minimized overseas travel and allowed the European based players to have some rest prior to starting training camps for their club seasons). Secondly, the final 23 man roster for WC 2022 is hardly set. There are a lot of slots available to those players that step up over the next year or so and this Gold Cup is a key part of that. They will get to spend the a month with the coaching staff and have plenty of opportunities to impress. So lets take a look at the final Gold Cup roster by position and see who is there and what the opportunities they have to get on the field both in qualifying and hopefully WC 2022. For each group I will start with the current expected “locks’ on a WC 2022 roster spot.

Zack Steffen, Ethan Horvath, and Matt Turner are the guys expected to be on the final roster. The order seems to be the way listed here but many are clamoring for Turner to be the #1 for the simple fact that he gets a lot of playing time compared to Steffen who is #2 at Manchester City and Horwath who has been the #2 at Club Brugge. But Horvath looks to be transferred in the current window and if he lands a spot where he gets a lot of playing time he could move up to #1 (he is my current choice anyway).

Matt Turner – likely to be the starter in most Gold Cup matches and this is his big chance to showcase his stuff.

Brad Guzan – likely a bit of a farewell for him and if the US is sure to advance regardless of the outcome of their last Group Stage match I could see him getting the start. And if injuries were to occur over the next year he could be in for the 3rd keeper slot for Qatar.

Sean Johnson – Similar to Guzan but I think behind him. IF he plays well over the next year he could surpass Guzan and secure a spot in Qatar is injuries hit us.

Antonee Robinson, John Brooks, Chris Richards, Sergino Dest, and Reggie Cannon currently are penciled in for the final 23. That would leave 3 open spots.

George Bello – Left back is a position of need to the Atlanta United player will have a chance to make his case.

Reggie Cannon – Currently with Boavista in the Portugal First Division but rumored to be up for a move to Serie A in Italy. While penciled in for a roster spot strong showing here would further his case.

Shaq Moore – An interesting player on Tenerife in Spain. Has had a couple of previous US opportunities and has not done much to bolster his chances or hurt himself either. But he clearly needs a strong showing in this camp to get in the mix.

Donovan Pines – The DC United defender has not been capped for the team yet so he has plenty to prove. He has one big thing on his side. He is Big. As in 6’5″ big.

Miles Robinson – Another Atlanta United defender and probably one with a strong shot to get in the mix for qualifying.

James Sands – Youngster from NYCFC. An intriguing kid who is ripe to make his case.

Sam Vines – Colorado Rapids left back who has several caps for the senior team. Playing a position that does not have a lot of depth right now so he has a real shot here. But has to show he can defend at this level.

Walker Zimmerman – The Nashville FC center back could almost have been listed in the expected final roster. He is the most experienced defender in camp and will be expected to anchor the back line.

The deepest group with the current team. While there are a couple of spots potentially open its hard to surpass guys named Weston McKennie, Tyler Adams, Brenden Aaronson, and Yunus Musah, Followed by proven backups in Sebastian Lleget, Kellyn Acosta, and Jackson Yueill.

Kellyn Acosta – One of two mids who can play the #6 spot if Tyler Adams is not available. The problem is he hasn’t shown that well at the international level.

Gianluca Busio – This kid is an up and comer currently on Sporting KC. Potential for a transfer to Europe in the January window. A good showing at the GC will enhance his chances to get called in for qualifying and a transfer.

Sebastian Lleget – For all his detractors its hard to argue with his success on for the Nats. He scores what seems like more than he should at the international level. But at this level its results that matter!

Cristian Roldan – One of the more capped players in this camp with 20, he has just never quite showed enough at the international level. He has been playing well for the Seattle Sounders so we’ll see. Likely needs to do really well here for future considerations.

Jackson Yueill – The San Jose Quakes mid has also had a number of appearances including the recent Nations League. Put him in the same camp as Roldan. He needs to show more than he has.

Eryk Williamson – The Portland Timber mid who has yet to be capped. Many fans have wanted to see him in a Nats uniform for awhile. Here’s his chance.

The wings are deep and strong led by Christian Pulisic and Gio Reyna. Then you have Tim Weah and Jordan Morris. Morris suffered a significant knee injury this past winter but is already back in training. Those 4 are likely to make the final roster. But its the striker, the #9 where we have issues. Its not like there isn’t talent there. Current starter Josh Sargent started all last season in the Bundesliga. Daryl Dike played well in the English Championship. Matthew Hoppe showed some flashes in the Bundesliga as well. The problem is that none of them has of yet really stepped up in their matches with the Nats.

Paul Arriola – The DC United winger has plenty of experience at the international level and has done fine. Nothing flashy but he has a big time motor and comes back well to support the defense. He likely has a role in qualifying.

Daryl Dike – The Orlando City SC #9 has some great attributes. He’s big and can play with is back to goal. And he has shown he can score. If he can translate that to the Nats he could very well be a starter.

Matthew Hoppe – The Schalke O4 striker has yet to play for the Nats. This will change during the Gold Cup. He can play as a #9 but may be better suited as a wing. Expect to see him at least a couple of matches during the GC.r

Jonathan Lewis – The Colorado Rapids wing has had several matches with the senior side and has failed to impress. But he is fast and can have a role as a late sub against tired legs. His issue is his size or to be more precise lack of. At 5’7″ and150# he has shown a tendency to get powered off the ball. If he can build some strength and use his speed to avoid physical confrontations he could be in the mix.

Gyasi Zardes – The Columbus Crew forward is the senior guy on this roster. He can play with back to goal and can score. His historical issue has been his first touches were often not good enough at the international level. He has worked had to improve in that area. He is likely in the mix for qualifying and could find his way onto the final 23.

So with that backdrop lets look at the actual tournament. While the coaching staff stated that their priority was the Nations League that doesn’t mean they won’t try and win the GC. Its still our Confedration’s tournament and it does earn FIFA ranking points. The initial field has been trimmed down to 16 teams in 4 groups.

Mexico is clearly the favorite here and is sending most of their team form the recent Nations League. The other three are a dogfight for second. Curacao is sneaky good for such a small country. T&T….well they are the side that eliminated us from qualifying for WC2018. El Salvador has been to the WC twice albeit not since 1982.

Gonna call it now. This is the toughest group. Although the US and Canada are odds on favorites for the top two spots both Martinique and Haiti can cause some trouble. Don’t sleep on those two or they can hurt you.

Probably the easiest group. Costa Rica and Jamaica advance and anything but that would be a major shock.

Clearly Honduras is the class and Panama should be next in line. The other two could surprise us but that’s what it would be …a surprise.

Well there you have it. Kickoffs this Saturday and finishes up with the final on Sunday August 1st. The US have have sent their “B” team but they should advance. And as per CONCACAF approach, the US and Mexico are on opposite sides of the brackets so would not face each other until the final. The Nats have enough talent and experience to make that final. Let’s hope they do. But more importantly lets hope some of the younger players step up and show us they can be a part of qualifying come September.