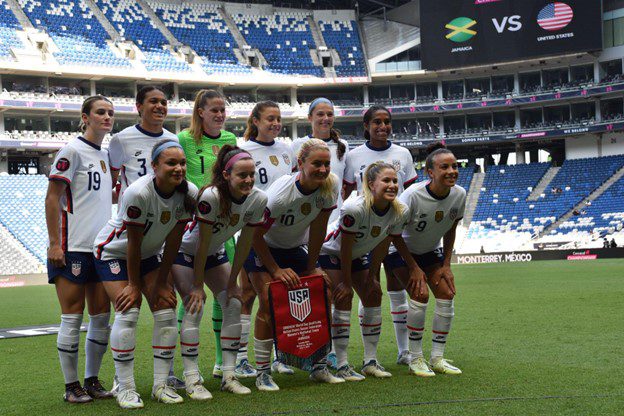 [MONTERREY, Mexico] It only took six minutes for the U.S Women’s National Team to build a comfortable lead and show the world that their youth movement is one to be reckoned with.

The USWNT clinched their ninth World Cup berth after defeating Jamaica 5-0 in their second game of group play in the CONCACAF W Championship, thanks to a dominant performance from their younger stars.

The second-youngest player on the team, Sophia Smith, scored two goals early for the stars and stripes, one of which came off the outside of her right foot, a very challenging shot.

“That might be my first outside foot goal,” the 21-year-old forward said about her acrobatic shot. “I practice it every day, but I just never been in a situation. [But] Today I did.”

“I think I said, ‘that was sick, Soph,’” Rose Lavelle said about the rare right-footed goal.

Three minutes later, she sent another shot over the top of Rebecca Spencer, who attempted to disrupt Smith. Allyson Swaby tried to run down the free ball, but it crossed the goal line before she could kick it away.

With the older veterans on the team, it was a much better performance for the stars and stripes, who looked beatable against Hati on Monday. Margaret Purce and Smith both did an outstanding job pressing the Jamaican defense on the wings, continuously setting up attempts. Unlike in the tournament opener, the heat did not impact the reigning world champs much.

“Each game is an adjustment; it’s hot here,” Smith said. “We are getting use to it, and  I think our preparation in Denver and Salt Lake City help with the altitude. We’re a very fit team, and now is just about trusting [the]preparation that we’ve put in, and it will help us in the rest of these games.

Third-year head coach, Vlatko Andonovski, mentioned that the team did not have to work as hard as in the first game because of the better play.

“I don’t think the intensity was any better this game compared to the last game, in fact, we ended up running a lot more,” Andonovski said about the team’s performance. “The reason why was because of the little things [like] countermeasures, losing the ball in critical areas, missed passes, or losing individual battles.”

The two early goals put Jamaica in a hole they could not figure out how to get out. Newly hired head coach, Lorne Donaldson, did not shy away from admitting his team was not ready for the champs. Donaldson took over the team in early June, and many expected a much better performance from the Reggae Girlz.

“You’re not going to play the world champions that bad and expected anything to come out of it. We weren’t good.”

Lavelle added another goal in the ‘59 pushing the lead to 3-0. Kristie Mewis and Trinity Rodman both entered the game off the bench and contributed two goals in the last ten minutes of the game.

The experiment of mixing young and old players has looked to be the right move for the USWNT. Anyone watching this team can see they are a tight unit that enjoys each other, on and off the pitch. Smiles are all-around before, during, and after the game.

“Every training session, we’re pushing each other super hard,” Rodman said about the squad’s morale. “It’s been a great experience. The competitiveness is crazy [and] getting the wins, and the goals are a bonus, so it’s been great.”

Veterans Alex Morgan, Becky Sauerbrunn, and Kelly O’Hara received the day off. Megan Rapinoe was not with the team because President Joe Biden awarded her the Presidential Medal of Freedom.

The final game of the group will be Monday against rival and host nation, Mexico. Mexico suffered an upsetting loss to Hati 3-0, putting them in a must-win position, or they will miss the World Cup for the second time. The USWNT is excited about the matchup, especially with the game being on foreign soil.

“I think it will be a very good game, a good show,” Andonovski said about the upcoming rivalry matchup.

“We are excited and looking forward to it because we are expecting a lot of fans, we’re expecting a lot of cheering and booing. For us, this is very important [with] this young team that we have, the younger players have never experienced this, being outside the U.S. and playing games in front of 30-40 thousand people.”