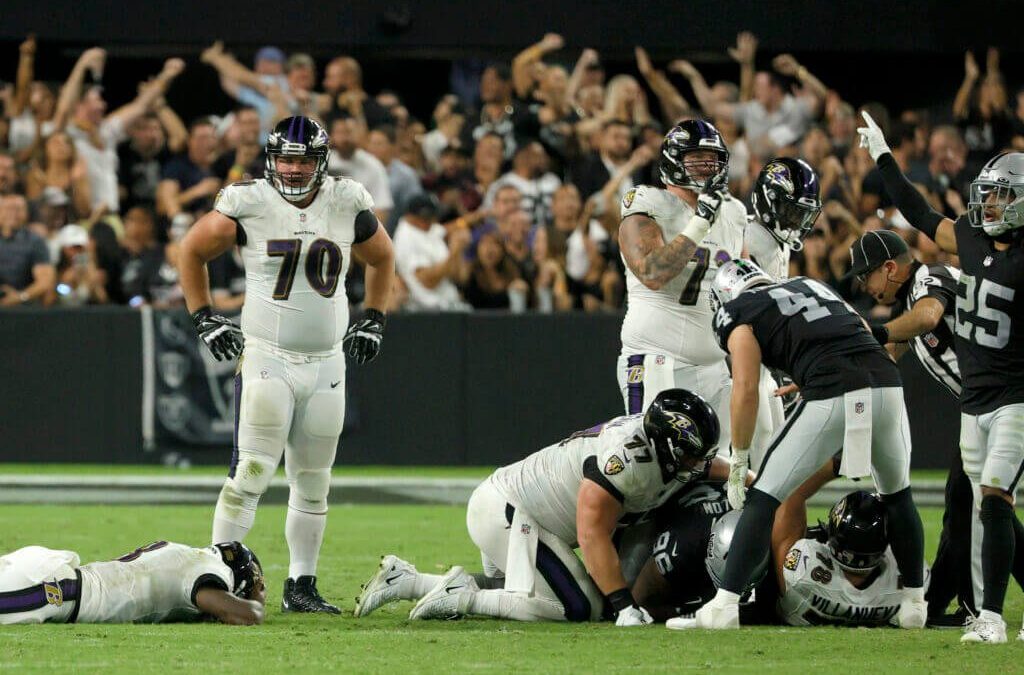 Can we get to games that count so we can stop speculating and let the Ravens show us who they are please!!

It seemingly took forever to get here, the final game of Week 1. It also took forever, deep into overtime to draw this conclusion.

Settle in for a frustrating year. Why do I say that? It looks like the best version of the offensive line cannot pass block a lick against simple four man rushes. Lamar Jackson is going to look like an MVP one drive, and a liability on the next. The coaching staff is still figuring out the running back situation even though the Ty’Son Williams looks like a good option. The defense which we thought was a strength, couldn’t provide pressure with all out blitzes and the zero safety/11 in the box look was exploited. There won’t be many games where the Ravens just impose their will, and I get the feeling many games will come down to the wire that shouldn’t making it, frustrating.

I know it’s a game by game kind of league and Week 1 isn’t an indication of the entire season. But since it’s all we’ve seen, what else is there to currently go on?

Here are five thoughts on the 33-27 overtime loss in Las Vegas.

1. Ben Cleveland was a healthy scratch, and the O-line was horrendous.

Before the game started, we got another chance to play prognosticator. Third round pick and mountain of a man, left guard Ben Cleveland was listed as inactive. It was pretty apparent that Ben Powers had won the starters job given that Cleveland missed some time in camp with a concussion. (Tyre Phillips started at LG despite getting more run at the tackle spots in camp/preseason). But Cleveland has been back at practice enough now. Played the second half of the final preseason game. We knew the rookie would be a project as he’s a monster run blocker but needs to refine his technique in pass blocking.

Perhaps the Ravens being down so many running backs meant the game plan was to throw the ball more, hence, not potentially putting a rookie in a spot that could make the team weaker.

As it turns out, the Ravens played a balanced offense. 14 runs and 16 drop backs at the half. Ended the game with 33 drop backs and 34 runs. Phillips was carted off with a knee or leg injury in the second quarter and gave way to Powers. Seems like Cleveland will be active from here on out given what looked like a severe injury to Phillips.

Alejandro Villanueva was extremely disappointing. Maxx Crosby owned him. He had five of the Raiders seven hits on Lamar Jackson, but Crosby must have had double digit pressures allowed by AV. I don’t think I’ve seen a tackle with his back to the line of scrimmage as much as he did tonight.

The Raiders won in the trenches all night with just a four-man rush. They didn’t blitz until the last play of the 3rd quarter. They also won on the other side as the Ravens seemed to send the house often and didn’t disrupt Derek Carr too much.

2. Ty’Son Williams had one carry in the second half.

Le’Veon Bell and Devonta Freeman were not activated from the practice squad for this game. Undrafted free agent Ty’Son Williams and 31 y/o veteran, Latavius Murray were the top backs.

Williams solid play in the preseason continued against NFL starters in his first regular season action. On the second drive of the game, he capped it off with a 35-yard TD run on a 4th and 1. He had eight carries for 63 yards and three catches for 29 yards at the half. The second half was the Latavius Murray show apparently to the tune of 10 carries for 28 yards. Though he did find the endzone for eight yards, why did they sit the hot hand completely?

This was not preseason game four. This was not extended training camp. Why would Ty’Son Williams need to be pitch counted, if that was in fact the plan ahead of time? Alternate drives, okay. Williams is struggling you want to change it up, okay.

Williams was part of a fumble credited to Lamar Jackson on a handoff that Jackson may have been trying to pull back in an option play fashion. He also missed a block leading to a sack. But if we’re being honest, five O-linemen and two tight ends missed blocks all night long. You can’t replace everyone for a blown assignment.

I would like to have seen the Ravens ride the hot hand more.

3. How about the defensive backs they loved so much they did some roster gymnastics to keep them all?

There were a few bright moments. Chuck Clark was good. Marlon Humphrey obviously did solid work. Though no one seemed ready for the game winning touchdown throw. Chris Westry and Brandon Stephens used their size to knock down a would-be touchdown pass a piece. But the duo was part of allowing a big play that without replay would have sealed the game earlier. I didn’t hear Geno Smith’s name at all, and he isn’t on the stat sheet. Tavon Young was completely out of his element in his first action in a very long time.

Of course, the absence of Marcus Peters stings. Derek Carr threw for 435 yards. Most of that coming late in the game when the Raiders scored 23 points in the 4th quarter and overtime. No one in that secondary could cover a baby with a blanket. That can’t be all because of missing one great player.

Pundits like to talk about figuring out Lamar Jackson. How about teams figuring out how to beat an all-out blitz with zero deep safeties? Cause…Derek Carr figured that out. Receivers in a bunch formation inevitably make the man coverage DBs bump into each other when they get into their routes.

He made enough plays to show you why he’s a former league MVP. Electrifying, mind boggling escape ability, and throws a dime for a touchdown. The few times he could stand up tall in the pocket and step into a throw, he delivered some pretty balls. He threw for 200+ yards and rushed for 75+ for the 6th time in his career.

He is also now the fourth player in NFL HISTORY, player, not quarterback, to lose a fumble in the 4th quarter, and overtime of a game. All while sporting some golden cleats that he’s sure to be fined for because, who knows. Likes to draw attention to himself? Cool trait. I don’t care if players want to have fun. But it invites criticism when you make mistakes. As if ball security took a backseat to fashion.

His offensive line let him down. His receivers let him down at times with drops. But he let the team down with careless ball handling. Keep doing what makes you great. Just, tuck the ball away when you do it. The best quarterback in the world is worthless if they give the ball away multiple times a game.

5. Good to be humbled

I don’t believe in “good losses”. The Ravens did lose, and it must be humbling. But had they won, had they pulled it off in overtime, which they haven’t won their last four times in those games, they shouldn’t have felt any good about it. They could have been humbled and still come away with the win.

Being humbled makes you re-evaluate things. With the Chiefs coming up, now would be a good time to re-evaluate how to proceed. Running back usage. Blitz timing and disguising. Throw the zero safety plays in the garbage because the Raiders found the glitch, and the blueprint on limiting Patrick Mahomes certainly isn’t bringing the house. Ball security. Finding out if Alejandro Villanueva played, or if it was a turnstile wearing pads.

Tough game, scored 27 points. A ton of stuff to clean up and I don’t think it will take just a week to get right. There are a lot of good teams, that had poor performances in Week 1. I was hoping the Ravens wouldn’t be one.

0-2 seems quite likely with the Chiefs coming up Sunday night. Only saving grace is it is the Ravens home opener, and you hope the noise level is deafening and makes an impact.