Week 18, Ravens Fast Five: Out of our Misery 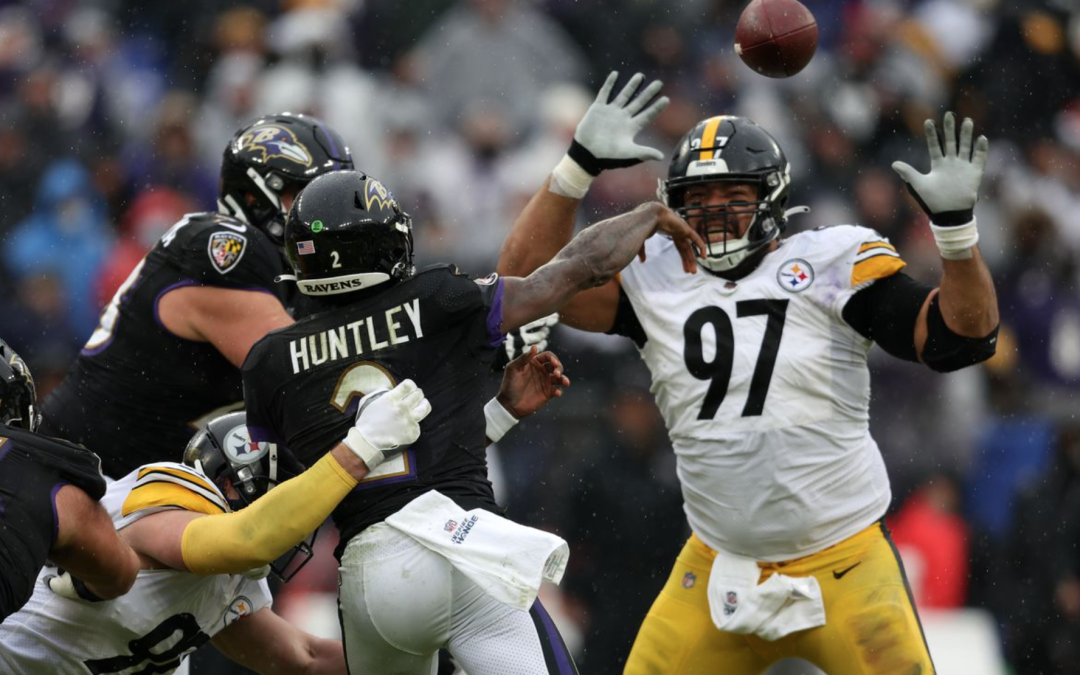 If we could 86 the 2021 season, that would be great. Without further ado, five thoughts.

1. Random takes from the game, then it’s moving on.

Tyler Huntley’s value is next to zero. Any thought of him being comparable to Lamar Jackson was dashed over the last few weeks. Any thought that he could be valuable in trade for a team needing a QB, was dashed today. He’s just not good. On the interception he threw trying to force the ball to Mark Andrews in the endzone, he said post game, “I was just trying to get the ball in a great players hands.” That isn’t your job. Progressions. The great receivers will be open, and when they aren’t, on to the next option.

16 targets to Mark Andrews, 50% of the entire team targets on the day, tells me Huntley locks on way too much. Someone should challenge him for the backup job next year. But he keeps proving he doesn’t have what it takes to win, and any extended loss of time by Lamar Jackson assures a lost season.

Latavius Murray picked a heck of a day to show up. 16 carries for 150 yards and a 46-yard touchdown run. Who? What?

We’re asking a punter to throw a pass with a wet ball in the rain to gain two yards. That’s the logic of our coaching staff now? Oy vey.

Tyus Bowser tore his Achilles tendon. Ugh. That’s sure to linger into the start of 2022.

I had zero faith in the Ravens winning this game as the Steelers went on their lone touchdown drive. Seen this movie too many times. Throw in the idea that Ben’s career was on the line. The Ravens weren’t winning, even though the improbable happened with the Colts losing to Jacksonville. The most improbable part of the four-team parlay to get the Ravens into the playoffs.

2. With Lamar Jackson at the helm, the Ravens win at least one of these games down the stretch and end up in the playoffs.

Jackson missed the final four and three-quarter games to end the 2021 season. Of those games, Tyler Huntley closed the gap to a two-point loss in Cleveland. Yet another poor coaching decision led to a one-point loss at home to the Packers. COVID ruined any chance of beating the Bengals. The offense didn’t find the endzone in a one-point loss to the Rams, and other then the 10-point disappointment in Miami, the 13 points scored today were the lowest of the season in a 16-13 overtime loss to the Steelers.

Granted, Jackson was playing average to poor before injury sidelined him. It had been a while since he donned the Superman cape. But he still has “it”. And “it” must have been enough to get over the top in at least one of the four games decided by three points or less in the last five games of the season.

What was once coined “black Monday” has already begun with the Broncos firing Vic Fangio on Sunday morning. Mike Zimmer, and likely others will follow come the beginning of the work week. After six Ls in a row, missing the playoffs after having been the AFCs number one seed just 35 days ago, no better time than now to hash this out.

Defensive Coordinator, Don Martindale: The final two games of the season saw the Ravens lose by squandering 4th quarter leads. Unable to get off the field on multiple third downs, and a 4th down against Pittsburgh in overtime. That is some Dean Pees like ineptitude. How much can be excused with the injury situation the Ravens found themselves in? Marcus Peters missing the season was a blow. But even with a healthy Marlon Humphrey, DeShon Elliott, Chuck Clark, the defense has a propensity to give up the big play every, single, week. Teams had answers for his super aggressive cover zero looks. They were looks that he looked to tone back at times as the season went on.

Dead last in passing yards allowed. Best in the league at rushing yards allowed. Looks like teams knew where to attack this defense. 19th in points allowed. The only teams worse making the playoffs will be the Steelers, who without a Colts meltdown would not be going, and the winner of tonight’s game, the Chargers or Raiders.

Verdict: I could take it or leave it. Maybe he’s been figured out. Maybe the injuries were too much, and the depth is seriously lacking. Maybe a heavy focus on the defense in free agency and the draft will get the Ravens defense back to where it’s used to being. A feared unit. I won’t be upset one way or the other with his employment status.

Offensive Coordinator, Greg Roman: Like his defensive counterpart, injuries took a toll on the offense as well. Roman is a running game guru, and before the season started, he was stripped of J.K. Dobbins and Gus Edwards. If you want to count special teamer Justice Hill, go ahead.

The big question is this. How much of the Ravens success was tied to Greg Roman versus how much was tied to Lamar Jackson doing other worldly things at various points this season? I tell you, there were a lot of slow starts to games this year. The parts of the game you game plan for all week before you make your halftime adjustment based on how things are playing out. When you start to let Jackson do his thing, the offense got better. It seemed like there were handcuffs at times early in games. Asking Jackson to make plays through the air so if you got a lead, he didn’t have to run around too much.

You can’t play this game scared. You must play to your strengths. And that is an area Greg Roman is struggling in. Ever since the Dolphins game, Marquise Brown’s role has been quick pass to the flat, run for two yards, tackled on first contact. What happened to the nine route in this offense? And don’t give me the excuse about the offensive line. You don’t need them to hold up for five seconds to get a deep throw off. You can also move the pocket, design some bootlegs. These are also absent from the Roman playbook. Even a simple slant to Rashod Bateman on the first drive of today’s game was a welcome sight. He gains separation with his crisp route running, and on the inside slant you have lots of green in front of you. Great play designed for the right player. But then we never see it again.

Verdict: Fire him. He has stopped getting the most out of his players and refuses to design the offense around all the strengths on it. No disrespect to Mark Andrews, but the target share is a bit ridiculous considering how talented, yet misused guys like Rashod Bateman, Marquise Brown, Devin Duvernay, and James Proche are with the ball in their hands. The man obviously cannot design an effective two-point conversion play either. 16th in scoring isn’t going to cut it. It is not even a debate that the skill positions at full health in 2022 are the best the Ravens have ever had. I want someone else running that ship.

Perhaps coach is responsible for the move of Patrick Queen to the weak side. A moved that paid dividends and finally had Queen playing like a first round selection should. What’s a similar move on the offensive side? I don’t know if there was one. Maybe game to game early on, influential on the changes, adjustments that jump started the Greg Roman slow starts.

Offseason, starting with free agency. I think it’s safe to say Sammy Watkins and Alejandro Villanueva were complete busts. Justin Houston didn’t wow me much at all but came much cheaper. Kevin Zeitler looked to be a solid addition though.

In the draft, Rashod Bateman has the makings of stud under a new offensive coordinator perhaps. Odafe Oweh flashed at times. As a project, you hope to see him take a big step forward in 2022. He finished the season with five sacks, and second most pressures among rookie edge rushers. The rest are just guys for now and that is okay. But I will still never wrap my head around the Ben Mason pick other than being a family favor. Enough with that.

Game management grade. D-. Say what you want about the game ending two points try in Pittsburgh. It was unnecessary, but sure, a win if they convert. The early choice to do in Cleveland failed, leaving the Ravens needing the rare occurrence of recovering an onside kick to have a chance to win. Recovered their first one in 20 years. Running it back again in the Green Bay game when there was time left for Aaron Rodgers to operate, it just sealed your fate there instead of making them beat you. The worst part there is he was mic’d up and completely indecisive about the decision. Asking the players what they want to do. Asking guys all the way up to the point of calling the play. You’re the coach. Nut up. Make the call. Live with the result.

Don’t be a spectator when you’re in 3rd and goal with your inexperienced quarterback and the play clock running out. Don’t confuse aggressive with dumb, like having Sam Koch try to throw a pass in the rain with a wet ball. He’s falling back into some old habits. It looks desperate.

Verdict: I still have faith. His background, his track record, all point to getting the most out of the 53rd man on the roster. In seasons like this, they were going 70 deep on this roster, and still competing. The Ravens can be better, and when they are, they won’t need to rely so much on smart game management to be a deciding factor in games. He’s bounced back from worse seasons than this which has earned him the opportunity to show if he can bounce back again.

This 2021 season will be remembered for three things. Injuries, end game decision making, and the ugly glimpse of what life without Lamar Jackson looks like. 2022 will start with trying to snap a six-game losing streak which seems unprecedented in our history. The last time they lost this many in a row was 2007 when they lost nine in a row in Brian Billick’s final season.