Week 2, Ravens Fast Five: Got the Monkey Off Their Backs 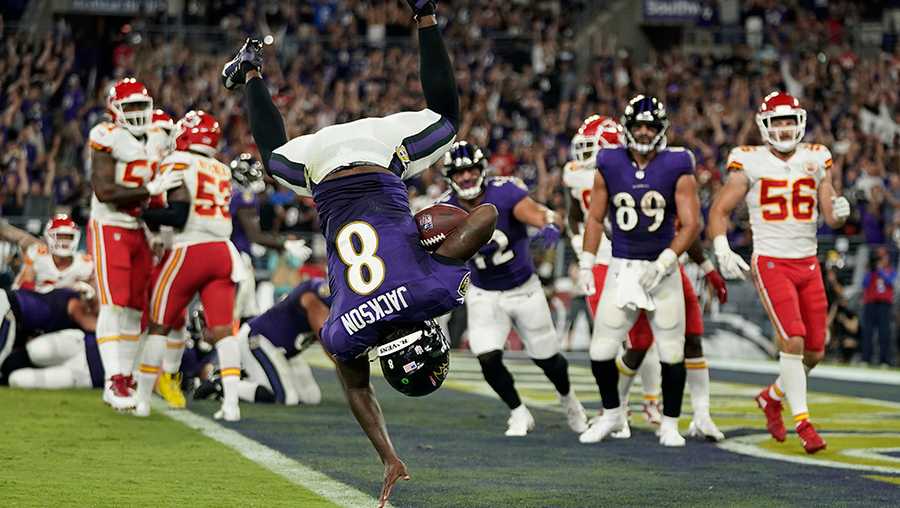 The Ravens finally beat the proverbial final boss at the end of the game. They knocked out Mike Tyson. Lamar Jackson was 30-5 against the rest of the league but 0-3 against Kansas City entering last night. Patrick Mahomes numbers in September are well documented. No losses, no interceptions in his career in early season September games.

Not anymore. We all watched the Ravens 36-35 win. Let’s jump right in with my five thought.

“You have to play perfect to beat a team like the Chiefs.”

Explanation: Apparently not. It was far from perfect. But the Ravens made the plays when they needed to be made. Two bad turnovers resulted in giving away seven points and taking at least three points off the Ravens side. Mahomes passer rating was about perfect, 158.1, until his late third quarter INT.  Two unnecessary timeouts taken would have certainly haunted the Ravens when they needed a clock stop in the final minutes. Instead, they get a forced fumble and recovery by rookie Odafe Oweh. They didn’t convert on two, two-point tries.

“I would bet all the units on the Chiefs”

Explanation: I didn’t, because I shouldn’t. I also know that the NFL is the most unpredictable sport to try to beat the book at. But most games that Patrick Mahomes is less than a TD favorite seems like easy money in the long term to me. Especially against a Ravens defense he has had his way with.

Explanation: I wrote an article some time ago that the best course of action with these large contracts for QBs is to pay the elite and roll with rookie contracts and pay a supporting cast. If you’re in between, that’s how you end up paying Jared Goff and Carson Wentz type guys too much money for the return they provide. You can’t afford a supporting cast and those guys can’t carry a team. Lamar Jackson entered the season on an MVP high in 2019, and a pretty good, just okay season low in 2020. Perhaps the truth was in the middle in 2021? After throwing a pick six (which after I came back to earth, I realized it wasn’t his fault Sammy Watkins fell on the route), and then throwing maybe the most inexplicable interception he’d ever thrown into triple coverage, that amounted to four turnovers in the last 2+ quarters of football he played. Couple that with not being able to connect on a couple deep, but not low percentage deep passes to open guys early in the game, that MVP season felt like 10 years ago at that point.

Alas, he did what the league elite does and put the team on his back, took over the game, and won it. He didn’t wet his pants like Baker Mayfield in Week 1 against these same Chiefs.

In the words of Teddy KGB, “Pay that man his money”.

Explanation: The Ravens punting the ball away with three minutes and change left in the third and the defense just looking like a pee wee team trying to tackle Travis Kelce, I thought for sure Mahomes was putting the game away. It was only three plays later that the Ravens forced him to throw an awful INT instead of taking the sack. Ravens scored just a couple plays into quarter number four, closing the gap to 35-30 instead of the more likely, 42-24 the other way.

While I’m eating crow, I’ll take this time to note that I listed Odafe Oweh as the sixth best edge rusher in the 2021 draft. The short version was he has athleticism for days but seems like a project with his lack of experience, and inability to generate much pressure. College stats don’t matter, but zero sacks were a little alarming.

I was a little skeptical of the pick, yet all Oweh has done is make play after play in the early going. Big time showing in front of two national audiences so far.

2. Night and day difference on the O-line from Week 1, to last night.

I still can’t answer for what happened on Monday night when Ronnie Stanley and Alejandro Villanueva had the worst games of their careers. Moving on, looked like it would be worse with Stanley sitting this one out with an ankle injury, and Villanueva moving to the more valuable left tackle spot. Patrick Mekari got his first start at right tackle. Ben Cleveland was active, and it looked like played the entire second half at left guard. Didn’t hear whether Ben Powers got hurt, but Cleveland brings another wrinkle. Everyone stepped up to the plate as Jackson had many clean pockets to throw from.

In the run game the pulling assignments look much cleaner. The beef up front were road graders as the Ravens pounded out 251 rush yards on 41 totes. Three players had rushes of over 20 yards on the night.

3. Martindale’s defensive adjustments were needed, even if Mahomes still got his.

The last thing I wanted to see the Ravens do against the Chiefs was do what they showed often in Vegas, ultimately their downfall in the week 1 loss, was 11 defenders in the box and no safeties. Patrick Mahomes eludes blitz pressure, and the Chiefs receivers are too talented and fast to be covered one-on-one with repeated success.  The Ravens only blitzed one time in the first half, and four times all night. The Ravens were able to produce pressure with three and four-man rushes, or at least made Mahomes scramble around after his first, second, third reads were all covered.

The defense made Tyreek Hill a non-factor and made lesser players beat them. Mahomes showed why he is one of the best as some of those players did have success, Mahomes completed passes to seven other receivers not named Hill or Travis Kelce. Hill was held to three catches for 14 yards. Kelce got seven catches for 109 yards and a score, which is still better than some teams allow him to get. A big chunk of that yardage came on a 46-yard scamper after a short pass, and some horrible attempts to tackle him. Take out that uncharacteristic play, and it’s a pedestrian night for the best tight end in the game.

It doesn’t show up in the box score and Mahomes’ final line is a good one (24/31, 343 yds, 11.2 Y/A, 3 TDs, 1 INT, no sacks taken). But the defensive approach was the one it takes to beat him. The blitz happy approach could have led to 50+ points, or the Ravens defense not getting off the field when they needed to.

4. Where is James Proche?

If I’m going to nitpick something, it’s the noticeable absence of the training camp and preseason darling, second year receiver James Proche. Where is he? He played nine snaps in Week 1, and we’ll see about the snap count from last night, but it couldn’t have been more than 10.

I worry about Jackson getting locked onto Marquise Brown and not going on to other reads when it’s not there. But I don’t understand why Proche isn’t even on the field. All we heard about this summer is the hard work he puts in, the battles he won every day in camp. Just curious why has hasn’t earned more time.

Pretty cut and dry. The monkey is off their back. No longer can you look at that 0-fer against KC of late and chalk it up as an L before it even starts. If the road to the Super Bowl goes through Mahomes and KC, cool. Pressure is off. They’ve beaten them. They beat them, mind you, while not even at full strength as a team. Greg Roman made some not so popular comments about how he plans to handle the backfield. All the backs looked good last night. Don Martindale’s all or nothing defense was picked apart in Las Vegas, so that didn’t look to bode well against the superior Chiefs. He put pride aside and adjusted. O-line was a dumpster fire six days ago, and they figured that out quick, without their All-Pro left tackle.

Lamar Jackson carried the team on his back to the win. Any team, any time, they will be favored in most games, and have as good a chance as anyone to beat anyone with #8 under center.

Bonus thought: I didn’t need analytics to tell me to go for it on 4th and 1 for the win.

It was ballsy. It was the right call. You don’t need a computer to tell you that. The way the Ravens pounded the ball on the ground all night, you have 4th and 1 yard to gain to win the game. Or you punt and give Patrick Mahomes about 50 seconds to find his way into field goal range. The choice was simple. Go for the win right there with the ball in your MVP’s hands. Even if he didn’t get it, it was still 100% the right call.