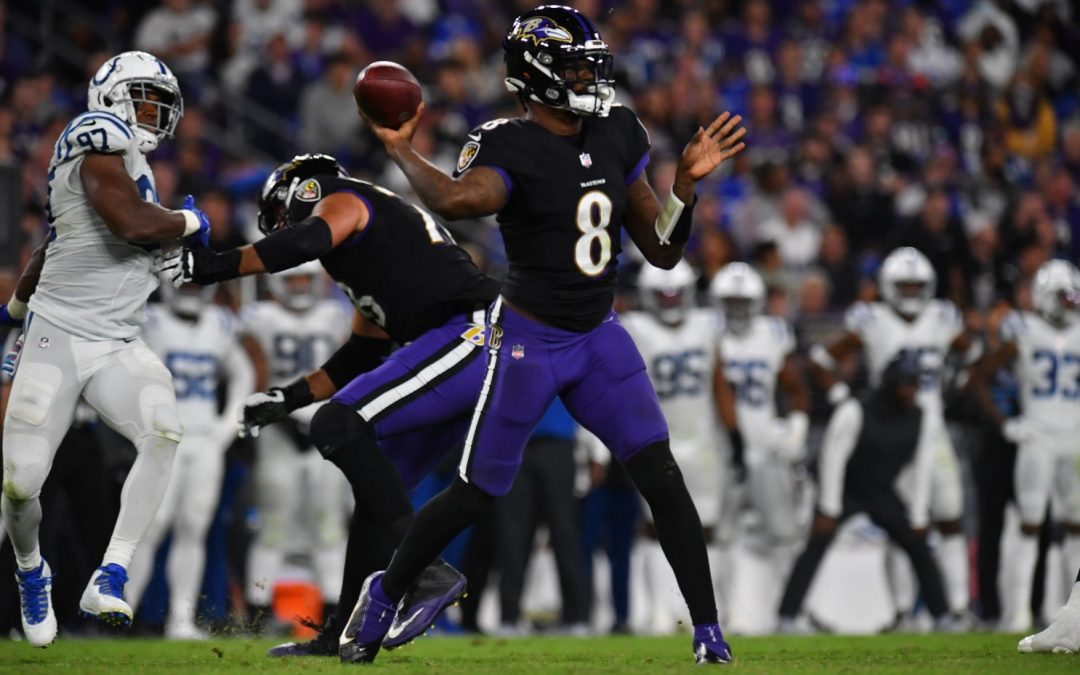 Another heart stopping prime-time performance by the Ravens as they pull out a comeback, 31-25 victory over the Colts, scoring 22 unanswered points in the process.

Discuss your thoughts on these topic on our message board.

1. Lamar Jackson accounts for 95.4% of the Ravens yardage in the win.

If that isn’t the definition of “taking over”, I don’t know what is. What would have been if the Ravens didn’t go three and out twice, and punt on their first four drives of the game?

2. Slowest of starts, players looked just plain not ready until about 10:30pm.

It was pretty obvious. Starting with the screen pass that went 76-yards and a touchdown on the Colts opening drive. It wasn’t a blitz beating screen because, it wasn’t a blitz. The Ravens rushed four. Where Taylor caught it there were two Colts blockers and four Ravens defenders in the immediate area. Jonathan Taylor just ran past guys. Pernell McPhee in particular, if he just extended his arms, could have slowed him down, perhaps made a tackle.

Anthony Averett was targeted and beaten all night. He couldn’t even make a tackle when committing blatant pass interference, wrapping up Michael Pittman only to let him go as if to be like “I didn’t touch him” as he trots into the endzone.

Lamar Jackson wasn’t taking off running when he had space to. Ball security issues again.

Latavius Murray couldn’t catch or run, but that’s nothing new.

Marlon Humphrey was so excited to see a Colts running back at holder and the punter at kicker that he jumped offsides to let them know.

Patrick Queen, if only we had a linebacker to replace him. He reacts like a turtle. There were a few runs to the outside where he wasn’t even in the frame when the tackle came. With the speed to get sideline to sideline, where are you?

This game reminded me of the one in “Varsity Blues” when the guys were playing hungover and tired after pulling an all-nighter at the gentlemen’s club. After three miserable quarters it ended up becoming an instant classic. I give it…a ten!

How many more times will the Ravens have to rely on making history in order just to win a game?

I’ll take the wins. But I’m also not a “you are what your record says you are” believer either. (See: 2020 Steelers who started 11-0). It took a late forced fumble against Kansas City to prevent them from kicking a would be game winning field goal. It took converting a 4th and 19, then an NFL record field goal, that mind you, if the ball rotation was slightly different as it meets the crossbar, bounces back off the crossbar and not through for the win. Last night was just ridiculous to erase the 19-point lead they did, make two, two-point conversions in the process, avenge the mistakes that set up the Colts for what was looking like a convincing win. All just to hope Colts kicker, Rodrigo Blankenship, would miss a 47-yard field goal as regulation expired, which he did. Before that you needed a miss to keep it a one score game in the closing minutes, and Calais Campbell came up with a block. The rest is history.

Ravens could easily be staring at a 1-4 mark next to their name. It’s not just winning close games, which most teams must do often. It’s the history making ways they are winning close games. Maybe once a year you win a game you probably shouldn’t with some wild circumstances playing out. They have had three of them in the last four weeks.

We’ve seen the stats by now. Lamar Jackson has the highest completion percentage for a QB who threw for 400 or more yards in a game. He joins Drew Brees and Donovan McNabb as the only QBs to throw for 300 yards and four scores in one half.

If Lamar Jackson was his own team, he would be 15th in the NFL in total offense. 17 teams have accumulated less yards as a team than Lamar Jackson has by himself.

Mark Andrews sadly lost his grandmother this past week and had a special game in her honor. His 11 catches and 147 yards are both career highs. I mentioned on this week’s podcast that I wanted to see Andrews have one of those Travis Kelce type games. I think I said, “10 for 150 and two scores.” Pretty close.

Lost in all of this is that the Ravens defense allowed Carson Wentz to have the best game of his career, yardage and Y/A wise (402 yards, 11.5 Y/A) and no one will ever know. Every highlight I’ve seen from the game they say “let’s pick things up in the third quarter” with the Jackson fumble to put the game seemingly out of reach. The Colts produced 513 yards or offenses, but you’d never know. Jonathan Taylor’s first drive 76-yard catch and touchdown run is an afterthought. His 169 all-purpose yards and two touchdowns, not even a blip on the radar.

It needs to be on the Ravens radar though.

Ravens rushers not named Lamar Jackson rushed 11 times for 24 yards (2.18 YPC). I don’t even know what to make of it at this point. The rotation of backs isn’t working. I think someone needs to get a clear heavy load one week and see if they get into a groove. Game script didn’t necessitate running later in the game. But this is an ongoing issue. Credit to Devonte Freeman as a pass catcher in this one though. He made a couple nice catch and runs late in the game to help set the Ravens up to score.

Something not talked about but got my attention was the Ravens uses of their second half timeouts. Normally a team will try to hold onto all three of them when trailing late in the game so they can use them to get the ball back with time to spare. When I say late in the game, I mean under three minutes.

Colts gain a first down with 6:08 to play. Timeout Ravens.

Campbell blocks the field goal keeping it a 25-17 game in the Colts favor.

I’m sure analytics came into play here. Though I’m not sure why you save the third timeout. If the Ravens don’t call the timeouts, they get the ball back with about three minutes left rather than 4:35. Could be down by one score, could be down by two scores. If they are down by two scores, meaning Campbell doesn’t block the high percentage 37-yard field goal attempt, then the Ravens could score, and not have to rely on a low percentage onside kick. About the last box Justin Tucker hasn’t checked in his storied career. You just need the traditional three stops with your three timeouts to get the ball back with a chance to win.

Maybe it was clear the defense wasn’t getting those stops, so you needed the extra time on the clock if it became a two-score game. My thoughts are by not spending the third timeout, had the Colts made it a two-score game, they would have wanted to score much faster, before the two-minute warning. Still have a timeout and the two-minute warning to try to get a stop. But once it became a one score game, then the goal shifted to leave as little time on the clock as possible, get to OT. The 39 seconds they left on there was still too much time, on most nights.

But if you fail at any point in that fourth quarter, you really want those three timeouts, don’t you?

I don’t know. Lame thought to wrap up on. Sue me.