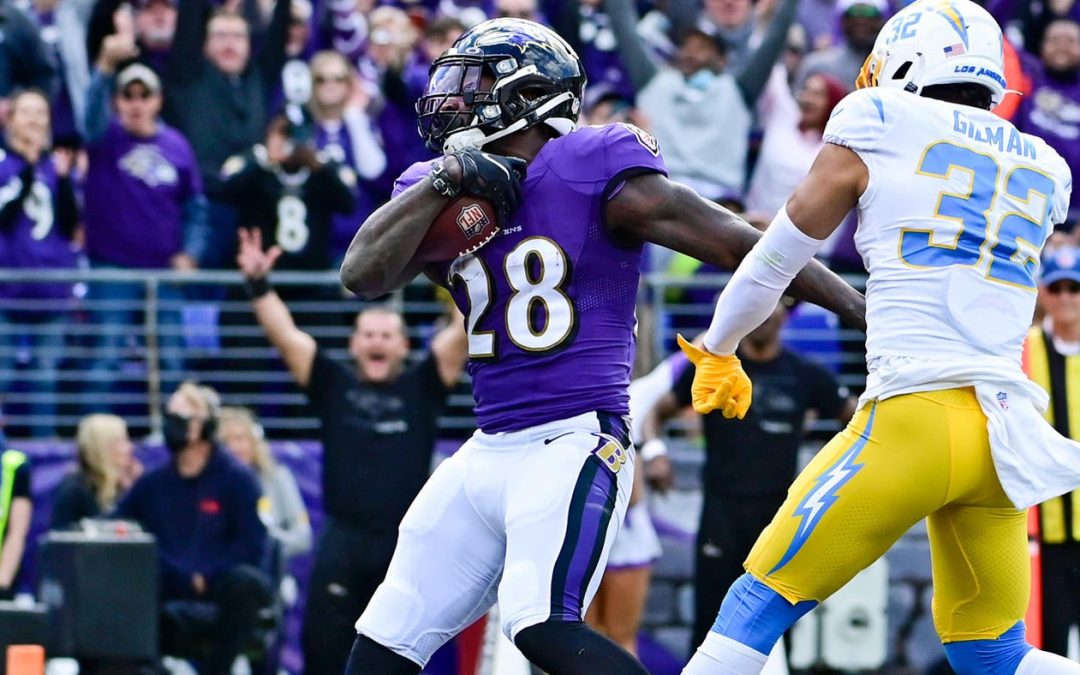 I believe absolutely no one predicted the absolute dominance. the Ravens displayed in their 34-6 win over the visiting Los Angeles Chargers. Five thoughts on the win as the good guys improve to an AFC best 5-1.

1. Running game gets going, with Ty’son Williams taking a seat for the second time this season.

Load management must be the only reason they would bench, clearly the best back on this squad.

However, even in Williams’ absence, the Ravens got back to the type of game we are used to seeing from them. Not the throw for 400 yards kind of game. But the run for nearly 200 yards on 38 carries type.

Devonta Freeman’s first look of the season came against the Chiefs and netted a 33-yard run on his only carry. He’d done little since until the final drive of the Colts game where he caught a couple balls against soft defense and moved the chains. But he picked up more of the load with nine carries for 53 yards and a score.

Long story short, the Chargers run defense is not good, and the Ravens attacked it with success. Even with some plodding vets. Credit to Greg Roman for not abandoning the run game in favor of a shootout, and credit the O-line for bullying the Chargers defense, creating some big holes to run through. Six players had a rush on the day, and five of them logged at least one double digit yard run.

Barring another player going on the COVID list, Le’Veon Bell’s next trip to the main roster will be to add him to the 53-man roster as he has used his two free call ups. The Ravens can continue to make him one of their four protected players each week. But six weeks in, I would rather add him in place of Murray. Thank you for your service Mr. Murray. Fresher, younger legs will take it from here.

I think I expected him to be eased into the offense since you would hate to see him aggravate a groin injury this early in the season. The passing game has been really clicking with Hollywood Brown, and second year players Devin Duvernay and James Proche are coming to play as well. Mark Andrews is a favorite target. There is only one ball guys. And today it went the running backs about half the time.

Bateman ended up catching four balls on a tied for team high six targets. With the game well in hand, he did drop an easy one that ended up going for an interception. All in all, you have to like how open he was getting. He didn’t have the Hollywood Brown debut with the two deep ball touchdowns in Miami two years ago, but we weren’t asking for that, didn’t need that, and how many guys typically debut that way?

Free pass on the drop, this time. Hope to see him carve out a similar target share going forward.

3. Defense came to play against a formidable opponent.

The numbers don’t lie. The Chargers had no answers. Justin Herbert threw to well covered receivers often. The score didn’t allow for the Chargers game script to really get Austin Ekeler to get going. Herbert led the Chargers rushing attack with 12 yards. That won’t cut it.

The entire secondary gets a game ball for this effort. Marlon Humphrey easily had his best game of the season. DeShon Elliott was making plays all over the place, including a few corner blitzes and Don Martindale’s scheme featured a lot of looks to confuse the young quarterback.

Two sacks, an interception by the afore mentioned Elliott, seven pass breakups. Herbert, the 2020 rookie of the year and early 2021 MVP candidate was held to a QBR of 18.8, and only 5.0 Y/A.

Bynes was playing second, or even third fiddle to Patrick Queen since his addition to the 53-man roster. But an early minor injury to Queen led to Bynes getting called to duty. I’d be remised if I didn’t say it seemed like the defense got a boost of sorts without Queen on the field. Bynes played like his hair was on fire, making plays out on the edges.

Queen did return. The defense was so good it didn’t stick out if he had a bad game.

I do believe Queen needs to be on the hot seat. A veteran who plays with instincts and has a grasp of the playbook like Bynes is a lot more valuable than an athlete who will play slower because he has to think too hard.

It’s hard to sit your first round draft pick 23 games into his career. But a timeshare might be suitable if the rumblings during camp, that Queen was having trouble learning the Martindale defense, are still an issue.

5. Big win for an early look at the AFC standings.

If the Ravens, Chiefs and Chargers are hovering around the top of the AFC come December and January, it will be huge to have a head-to-head tie breaker over them. The Ravens are 5-1, the Chargers dropped to 4-2.

The win today sets up a game with the Bengals with first place on the line next week. Who would have thought that for a Week 7 game at the beginning of the season? The Bengals improved to 4-2 with their dominating win over the Lions. If the Bengals pull the upset, they will share the same record with the Ravens, as well as the better division record, would be 2-0, and head-to-head edge so far.

The Bills play Titans on Monday night. If the Titans upset Buffalo there, the Ravens would be the sole five-win team in the AFC.

Bonus thought: The Ravens dominated and Lamar Jackson wasn’t even at his best.

Jackson made some plays with his legs. But nothing that’ll jump off the highlight reel. He only recorded 6.2 Y/A through the air, two picks (credit one to Bateman) one score. Wasn’t the history making performance they needed to beat Indy.

And the Ravens dominated.

That has to count for something when analyzing the team going forward.