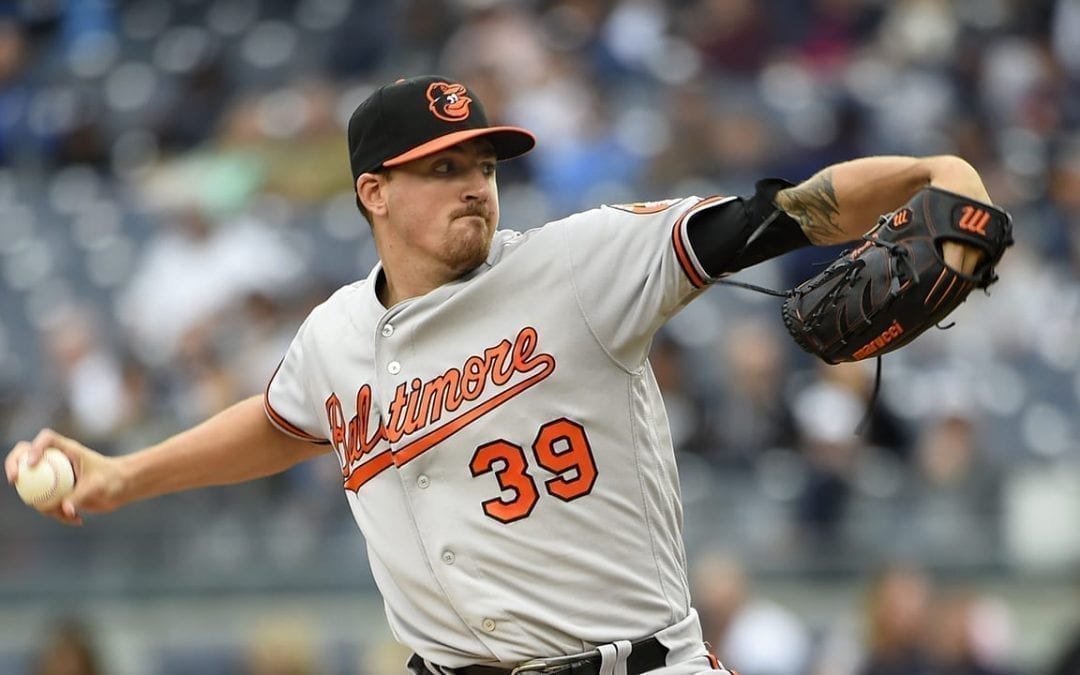 The second half of 2016 was the Kevin Gausman we all wanted to see.

He had a 3.10 ERA, struck out 8.9 per nine innings and had a .252 batting average against after the All-Star break. He dominated lefties, who hit .242 vs. his high-90s fastball and .177 against his amazing splitter. That’s what got everyone excited, author included, heading into the 2017 season.

But there was a problem hidden within the strong second half: Gausman had pretty severe reverse platoon splits even when things were going well. While righties could not touch his splitter (.077), his curve was not an effective weapon (.333), allowing them to sit on his fastball, which they mashed (.321).

Most starters can’t get along with just a fastball/splitter combo. They need a credible breaking ball to keep hitters – particularly same-handed hitters — off balance. Otherwise they could just do what right-handers did late in 2016 – let the splitter pass by and sit dead red.

So he more or less eliminated the curve (he’s thrown just nine this season) and introduced a slider that he threw in college but abandoned as a pro. And while he worked on the slider during the offseason and into spring training, the results, thus far, have been a complete disaster.

Opponents are hitting the slider at a .421 clip and righties, whom the pitch is designed to get out, are crushing it for a .438 average and .625 slugging percentage.

Even worse, the whole experiment has created a sort of nightmare avalanche effect where hitters are now crushing pretty much everything he throws, including the vaunted splitter (.368 batting average against).

Why is this happening? There are a couple of possibilities.

First of all, Gausman’s command has been off. His walk rate of 11.6 percent is by far the worst of his major league career and well above his career average of 7.0 percent. Unfortunately, he has struggled with this in the past in the minors, including a 10.9 percent walk rate in Triple-A in 2015. Since this is something that has cropped up in the past, it’s reasonable to assume that Gausman will figure out what is ailing him mechanically and regain command.

In the meantime, though, there are other issues at hand. In addition to his lack of command – or perhaps because of it – batters have changed their approach to him. They are swinging at his offerings far less often.

Overall all, Gausman’s opponents have a swing rate of just 42.6 percent against him (it was 48.2 percent in 2016). The MLB average has ranged between 46.5-46 percent over the last two seasons, meaning batters have gone from swinging at Gausman offerings more often than they do against most pitchers, to far less in just one season. That’s a huge change.

One more odd tidbit (all of these numbers are from FanGraphs, by the way) is that when batters do swing, they are making contact on Gausman’s pitches outside the zone at a greater rate, 71.1 percent. The league average is 62.4 percent, and Gausman’s number was 65.5 percent last season.

Conversely, the swinging strike rate vs. Gausman is just 9.1 percent, well below not only his career average (10.2 percent) but the MLB average (10.3 percent) as well.

So Gausman is struggling with command and batters are recognizing it, swinging less at all of his offerings. When they do chase outside the zone they’re making more contact than they used to, making them harder to put away. This explains the decreased swinging strike rate and the career-low strikeout rate of 13.6 percent.

It would also seem to suggest that batters are recognizing his pitches better than ever before. Now keep in mind that Gausman never was particularly deceptive. He has a pretty simple, smooth, over-the-top delivery. If he threw 89 without any deception as opposed to 96, he probably wouldn’t be here. On top of this, there could be something in that delivery that is tipping off when a slider is coming vs. the fastball.

In addition to all of this, Gausman has drastically altered his pitch selection. Not just in replacing his curve with his slider, but in how often he throws his splitter – he is throwing what is arguably his best pitch far less often.

In the second half of 2016, which to date stands as Gausman’s best run in the majors, he threw his splitter 22 percent of the time. The splitter has proven to be his most effective complement to the upper-90s fastball, and drew just a .148 batting average against in the second half last season.

Now conventional wisdom holds that the splitter will not be as effective against same-handed batters, so Gausman threw it less frequently against righties, just 15 percent of the time. Bucking conventional wisdom, however, those batters hit just .077. (According to Brooks Baseball).

This season, though, Gausman has gone away from the splitter vs. righties (9 percent), instead preferring the slider in that situation (24 percent). The strategy, plain for all to see, has been a disaster. Righties are hitting .438 against Gausman’s slider. Even worse, the once dominant splitter has lost its effectiveness within this pitch combination, getting raked for a .429 average by right-handers, .368 overall.

It’s hard to blame Gausman for wanting to expand and improve his repertoire. The curve was not a very effective pitch, and conventional wisdom says he’ll need an effective breaking ball to succeed in the long run.

In March, he said he started throwing the slider late last season by accident, then worked to develop it (which he featured in college) in the offseason. He says it’s really sort of a hybrid slider/curve that he can lengthen and shorten as he likes.

“I’m going back to the grip I threw in college,” he told the Sun. “Now I’m throwing a slider and a curveball. Really, yesterday was the first day throwing my curveball in a game, so it was good – pretty inconsistent – by my slider has been really good this spring. I think that’ll be a big pitch for me this season, for sure.”

In the first month of the season, we have yet to see the slider become that “big pitch” Gausman is seeking. That’s not to say it can’t be.

We’ve seen some nice examples of it being effective on occasion already. Such as here …

But overall this has been an experiment that has blown up in his face. His command is off, batters are being far more patient and being fooled far less often. Even worse, he has been unable to put batters away as they seem to be able to recognize his best pitch – the splitter – much easier than in the past and either lay off it, or rake it when it’s in the zone.

“One thing I always liked in college about having two pitches, two breaking pitches, was if one day my curveball is not working, usually the other one is,” he said. “You have more options, especially being a starter. That’s always good.”

In theory, that’s true, but only when those options actually work.

You can take issue with Gausman upsetting the apple cart. You can shout “if it ain’t broke, don’t fix it!” until you’re blue in the face. But you have to like that Gausman not only recognizes an area of his game that needs improving for long-term success, but has an idea for how to get there.

There has been no denying how painful the transition has been thus far, and it’s likely to be painful for awhile yet as Gausman works out the kinks.

Hopefully, though, things will come around sooner rather than later, because the Orioles are going to need him.