Will Pedro Alvarez Rejoin the Orioles? 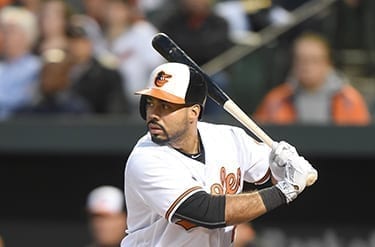 One year ago this time, Pedro Alvarez’s tenure with the Baltimore Orioles was off to a slow start. A sluggish April was carrying over into what would prove to be an even more frustrating May. Starting in June, however, Alvarez had a blistering summer that—even with a slowdown in production over the season’s final month—left him with a .249/.322/.504 line, 22 home runs, and a 116 OPS+ across 376 plate appearances.

That seemed like it could be enough for Alvarez to serve a role as a part-time first baseman/DH in 2017, be it in Baltimore or somewhere else. However, the offseason ended with Alvarez still a free agent and he would not find a job until signing with the Orioles as a minor league free agent during spring training. That signified much more than Alvarez’s return to Baltimore, as it also began a period in which he and the Orioles would begin his attempt to become an outfielder.

His late signing, combined with the position change and lack of openings in the majors, made it likely that he would start the year in Triple-A Norfolk. That proved to be the case when the season began, but it still seemed probable that he could rejoin the Orioles at some point. Weeks into the season, he is still in Norfolk, leaving questions on what to make of Alvarez’s future with the Orioles.

A quick glance at Alvarez’s stats shows a surprisingly sluggish start at Norfolk, where he is batting .177/.269/.310 with four home runs entering Tuesday. It could be argued, however, that the more important development is the position switch. After all, Alvarez has a seven-year major league career that shows him to be capable power hitter who can produce far more than what he is doing at Triple-A.

When focusing on his work in the outfield, however, it is hard to quantify how that experiment is going. Available data on defensive metrics in the minors is not as thorough as it is in the majors, and scouting information has proven to be scattered.

One of the most recent—and perhaps the most in-depth—story on Alvarez’s ongoing stint with Norfolk comes from The Virginian Pilot. In an article dated May 6, David Hall covered Alvarez’s conversion to the outfield with a story that included this:

Where Alvarez is unproven is in right field, where he was tied for the IL lead in games played. Early in the season, fly balls that forced Alvarez to cover a great distance were often adventures. But that’s changed.

“He was thrown right in the fire,” said center fielder Logan Schafer, a veteran of parts of six major league seasons who has played beside Alvarez most of the year. “And the first week or two, we were like, ‘OK, obviously, he’s getting used to it.’ But then I feel like two to three weeks ago, he’s kind of turned a corner. His routes are a lot more sharp. He’s starting to learn his own arm strength, what he can do. He’s slowing himself down when he’s fielding a ball on the ground at him. It’s just a comfort thing, and the more he’s out there, the more comfortable he’ll get.”

The switch, Alvarez said, was a long time coming. It started in earnest with a conversation with Orioles manager Buck Showalter late last season, but it actually predates that.

“It’s been something that’s kind of been brewing,” said Alvarez, who has been charged with just one error this season. “As part of my cardio, I would shag in the outfield during early BP and stuff. But I would do it with some intent, to actually try to do a good job. So I guess I’ve always kind of been trying to do some work out there.”

That provides some reason to believe that Alvarez is adjusting, and can continue to iron out his outfield play. What remains to be seen is what will happen in his effort to return to the majors. Previous reports have indicated that Alvarez can opt-out of his minor league contract this month and, while it remains to be seen what decision he will make, it is easy to see how the Orioles are shaping up at the major league level.

Trey Mancini has shown impressive power in the majors, and has looked competent in left field despite his recent move to the position. Hyun Soo Kim is still useful to the club as a platoon option who bats from the left side of the plate, complimenting Joey Rickard’s respectable work on the right side. For his part, Seth Smith has gotten off to as a strong of a start as one could have imagined when the Orioles acquired him from the Mariners. Craig Gentry, who hits from the right side, has received some work for his defense.

Yes, it is possible that Mancini and/or Smith will not maintain their starts, but that does not do anything to add to the case for bringing Alvarez to the majors now. With that in mind, there is no obvious opening for Alvarez at this point, and barring an injury that is unlikely to change. It is hard to image the Orioles bringing Alvarez up to simply be a bat off the bench and not as a player the field.

Alvarez could decide to opt-out and seek a positon with another organization, be it as a continuation of his move to the outfield or resuming his work as a first baseman/DH. If however, he feels comfortable with the organization and the Orioles believe that at another point he could contribute, Alvarez may continue playing in the system.

Either of those scenarios could unfold, but some circumstances will have to change for there to be an immediate opening for Alvarez in the majors.