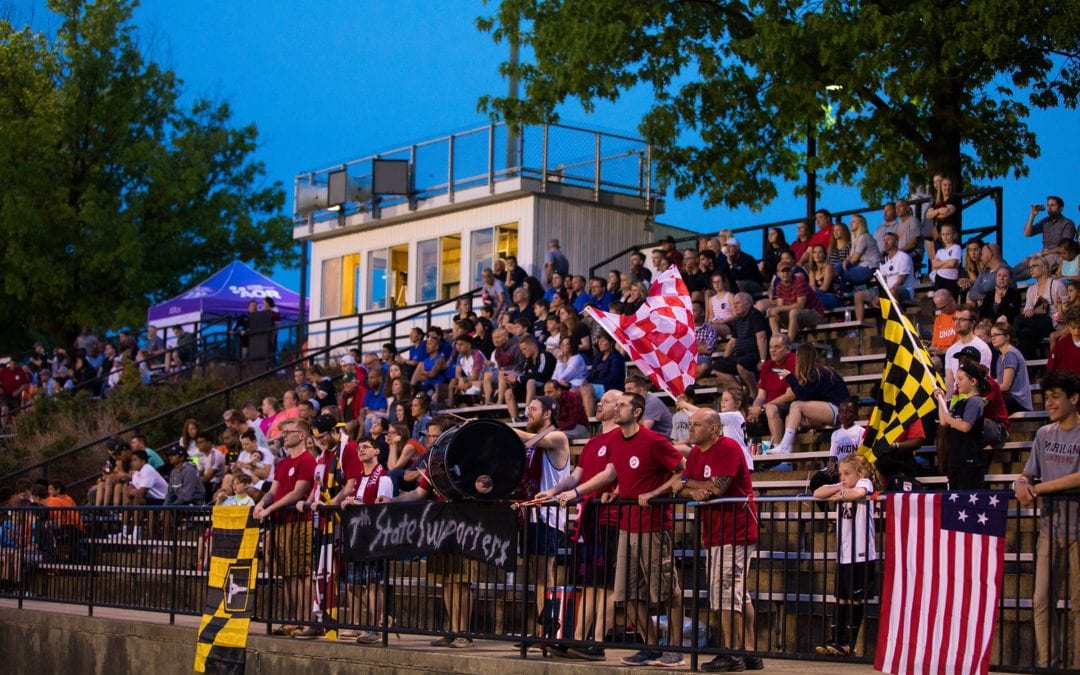 In one form or another, “Christos” has been a leading name in Maryland amateur men’s soccer since the 1990s.

Now, the club originally founded by a small group of friends has grown too big for just one league.

After taking the reins of the NPSL league side in 2018, in April it was announced the FC Baltimore Christos organization would also organize a USL League 2 side beginning in 2022.

The two leagues are widely considered the top level of amateur competition in the country, operating a late-spring to late-summer schedule that allows for participation from top college and occasionally high school-age players.

Like baseball’s Cape Cod League and others of similar vein, the NPSL and USL 2 are shop windows for pro scouts. And in the talent-rich Baltimore region, there wasn’t enough playing time available at Christos with only an NPSL club roster.

“The player amount that is in the area, we just don’t have enough spots to offer certain kids,” says Christos head coach Larry Sancomb, who has been involved with the organization since its beginnings. “And we wanted to give them another opportunity to be seen. We wanted to showcase our talent in Baltimore because there’s not a professional team. And it really gives them an option to get seen by the MLS teams, to get seen by the USL teams, and we want to just give these kids as much opportunity as we can.”

The exposure can be critical, particularly for players who mature a little later in their careers or for other reasons get passed over by the truly elite youth academy programs.

While Major League Soccer has increased investment into its academies, the college game and college players who compete in the NPSL and USL 2 still consistently fill out MLS rosters and have substantive careers.

Following his time with the Retrievers and with Christos, Bell signed a contract to play with New England’s USL 1 side — effectively a reserve team in what is the third tier of US pro soccer — in 2020. Then he made the Revs’ senior squad coming out of this preseason.

(The USL operates the USL Championship, USL League One and USL League 2. The Championship and League 1 sit on the second- and third-tier of American pro soccer. League 2 and the NPSL represents the top tier of amateur soccer and fourth tier of the overall pyramid.)

Because of subtle rules differences between the USL 2 and the NPSL, FC Baltimore Christos plans to use its two teams in slightly different ways.

The USL 2 has age limits and is completely amateur, and therefore will be focused more exclusively on collegiate players. The team in the NPSL — which has looser eligibility rules — will skew older and include players who at one point played professionally.

“We want to give these younger guys an opportunity to get more time, because it’s hard to break our men’s team sometimes,” Sancomb said. “So this gives these guys avenues to break in. And when their career is done, or maybe they can’t make teams, they’re going to keep playing with us.”

That there’s competition for time is evidence of the excellence Christos have achieved in the amateur ranks. Outside their NPSL duties, the team are perennial winners of the Maryland Major Soccer League and have achieved several national amateur honors.

Their brightest moment on the national stage came in 2017, when they made a Cinderella run to the fourth round of the U.S. Open Cup and took an early lead on D.C. United before ultimately succumbing to a 4-1 defeat.

This year, FC Christos began their NPSL campaign with a 5-0 win over Virginia Beach last weekend.

That a club with such pedigree will soon become affiliated with the USL while USL continues to explore launching a League Championship club in Baltimore is not lost on Sancomb.

He says it’s possible Christos could help catalyze conversations that help finalize League Championship expansion. And he’s happy for his organization to play any role in those discussions.

“They want to put one here.” Sancomb said. “We want to be that growing force. Even if we’re the connecting piece to that, we’re fine with that.”

The cachet the Christos name holds in the local soccer community could help forward conversations.

“I think the name is big,” he said. “The USL was very excited that we’re coming aboard because of what we’ve done and what we’ve showcased through the years. Our name represents Baltimore.”

He later added: “Baltimore is one of those places, you can come in here with a lot of money, but at the end of the day, if you’re not part of the culture, it’s very tough.”

With that name comes a trust that as FC Baltimore Christos continues to grow, it will still retain its community-oriented mission.

That is something Samcomb is adamant about. While only a fraction of the organization’s NPSL or USL players will ever make their livelihoods playing the game, all of them will have a place at Christos forever.

“This is about a bunch of guys helping each other in their lives, not just soccer,” he said. “Because look, only 1% of these guys are ever going to play really high level. This is a family business, I call it. And we care about them.”