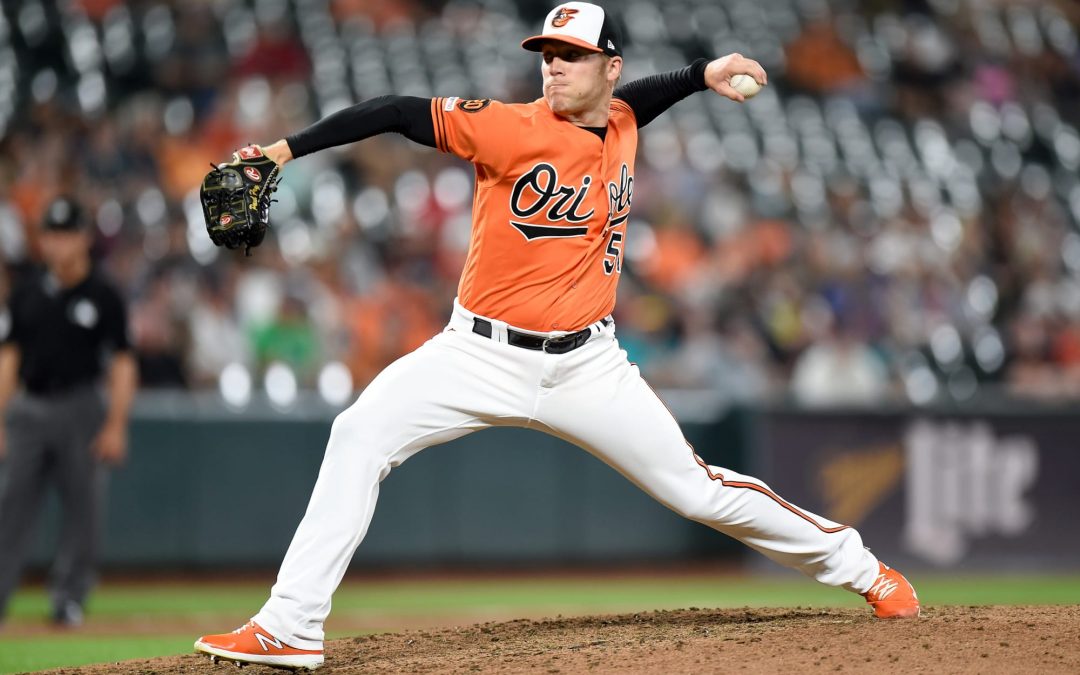 Welcome to ‘3 Up, 3 Down’, the weekly column breaking down the three hottest and three coldest Orioles players based on their performance during the previous week. It has proven to be an interesting exercise and good opportunity to highlight the highs and lows of a long baseball season. This extended week comes after the all-star break featuring series against the Royals, Rays, and Nationals.

We’re going to have to start calling him “Second Half Harvey” soon if he keeps this up. Many Orioles fans, OK pretty much all of them, had been calling for Harvey to be removed from the roster or at least the rotation for months now. In the first half he had a hefty 7.70 ERA over 18 starts covering 76 innings and a 1.76 WHIP. The Orioles are most likely the only team where someone could put up that kind of performance and never miss a turn in the rotation. In his two starts since the all-star break he threw back to back six innings of shut out baseball which has lowered his ERA to 6.65 and WHIP to 1.58. His first start was against the light hitting Kansas City Royals but against a Washington Nationals team that features Trea Turner and Juan Soto he only allowed one baserunner while striking out four batters. With the trade deadline approaching this week (Friday, July 30th) and teams desperate for pitching Harvey may be starting to look like a tradeable asset. As unrealistic as that sounds, and I still think it is highly unlikely, there aren’t many options out there and ‘The Dark Knight’ can at least eat innings potentially. His FIP is much lower than his ERA (4.43) and he has a 1.3 WAR. If Mike Elias can get more than cash considerations for him I will officially consider him a wizard but at the very least he is starting to pitch better at a time when the Orioles are desperate for innings so that provides the team some value.

Its been a great week and a half for boosting trade value for the Orioles. Coming into the year Severino looked like a fairly safe bet to be moved as a catcher with some recent success with the bat. It seems like every contending team can at least use an upgrade at back up catcher. With the inevitable debut of Adley Rutschman in 2022 and increasing catcher depth throughout the minor league season Severino should’ve been able to fill that role. But then the first half happened. His defense has only gotten worse behind the plate, he has never been a good pitch framer, and the power that he had shown since coming to the Orioles disappeared. Over 200 at bats he batted .220 with a .619 OPS and only four homeruns and eight doubles. The only good thing about his first half was an increased walk rate. It has gone from 6.5% in 2017 to 8.5% in 2018 and 2019 to 9% in 2020 and now sits at 10.5% so far in 2021. He came out of the all-star break hitting well and may be able to make himself a tradeable asset again before the end of the week. He wouldn’t bring much back in a deal but as an obvious non-tender candidate this upcoming off-season he wouldn’t need to. A flyer on a young international prospect or two would probably suffice. Brett Cumberland is waiting at AAA Norfolk to take his place as another offensive minded catching prospect.

If there is one player that we can be sure will be traded before the deadline its Paul Fry. He was having a breakout season to start the year before slumping a bit after the sticky substance crack down started in earnest, whether it was a coincidence or not. He is back to looking dominant out of the bullpen again after the break and the slider looks as dominant as ever, even getting Juan Soto to strikeout on an attempted check swing on one. With a raise due through arbitration after the season and desperate teams traditionally willing to overpay for effective relief pitching it’s the perfect recipe for Elias to get something of value for him. He has three years of team control left after this season so that increases his trade value and also makes it so the team doesn’t feel like they have to trade him if the right offer isn’t there. Elias held on to Mychal Givens in a similar situation before finally trading him last year for a nice haul (three players in our updated top 50 – Terrin Vavra, Tyler Nevin, and Mishael Deson) and was also able to get a top 15 prospect for Miguel Castro (Kevin Smith). Fry has struggled in limited time in the closer role but teams could see him as an Andrew Miller type lefty weapon out of the bullpen that they can keep for three and a half seasons.

Means finally made his return to the rotation after missing a month and a half due to shoulder discomfort. The good thing is he looks healthy. His velocity is in line with what it was before the injury and he worked 6.2 innings in his second start back. You can tell he still has some rust to work off though because he only struck out four batters over 11.2 innings. He only walked one batter over the same time but that goes into the issue of him not hitting his spots and leaving pitches too much over the middle of the plate. If he can’t work the corners then he is going to give up homeruns and his fastball/change-up combo won’t induce as many swings and misses. The bigger concern is how the timing of his stint on the injured list coincided with the sticky substance ban. There were videos circulating of Means going to his glove, belt, etc. early in the season and his spin rate has dropped on all of his pitches since returning but not at an alarming “spider-tack” level. They were down around 150 RPM’s in his first start back but his fastball was only down 49 RPMs from his season average on Sunday. I’m still very confident in Means’ ability to pitch effectively as a second or third starter on a competitive roster but he isn’t someone with plus-plus raw stuff who can get away with mistakes so when he isn’t at his best he will have the occasional rough outings.

Leyba was acquired from the Arizona Diamondbacks after going 0-22 in a brief stint with them but he was dominating at AAA before the call up. He came over and showed similar success with AAA Norfolk (.279 batting average, .849 OPS) before getting promoted to the Orioles to play some second and third base. Maikel Franco landed on the injured list with an ankle injury which opened up more consistent playing time for Leyba but he hasn’t been able to capitalize and translate his minor league success to the major league level. Hes batting .192 with a .557 OPS over 52 at bats with the Orioles and now Franco is back from the IL. He will seemingly go back to being the everyday third baseman which will leave Leyba on the bench and the most likely demotion once they decide that Jahmai Jones is ready to come up and play second base. Leyba has some skills as a switch hitter that can play decent defense all over the infield so he should stick around on the 40 man roster as a depth piece that the Orioles can stash at AAA but its unfortunate that he couldn’t make the most of his short opportunity this month.

Akin continues to find new ways to disappoint Orioles fans this year. He started off by pitching so poorly in spring training that he didn’t make the team to start the season. He finally was added to the roster but his command has been very poor. Between that and being unable to get outs after the first time through the order it has made him basically a high pitch count opener. He had a 7.54 ERA over 45.1 innings in the first half and then came out in the second half and got lit up for eight hits and three walks in just three innings. On top of that he was placed on the COVID-IL last week along with Anthony Santander which leaves a decimated Orioles pitching staff even thinner. I have no way of knowing for sure whether or not Akin has been vaccinated but if not that is another way he has let down the team and failed to secure a competitive advantage. If he did get vaccinated then its just more bad luck for a team who has seen every young pitcher who they had hopes for in 2021 fail in one sense or another. With John Means back, Matt Harvey somehow pitching good, Jorge Lopez being steady, the surprising success of Spenser Watkins, Alexander Wells pitching well in his first major league start, and Bruce Zimmermann expected to come off of the IL soon I think we may finally see Akin make his inevitable transition to the bullpen once he is re-activated.