A New Look Infield For The Baltimore Orioles Is Quickly Coming 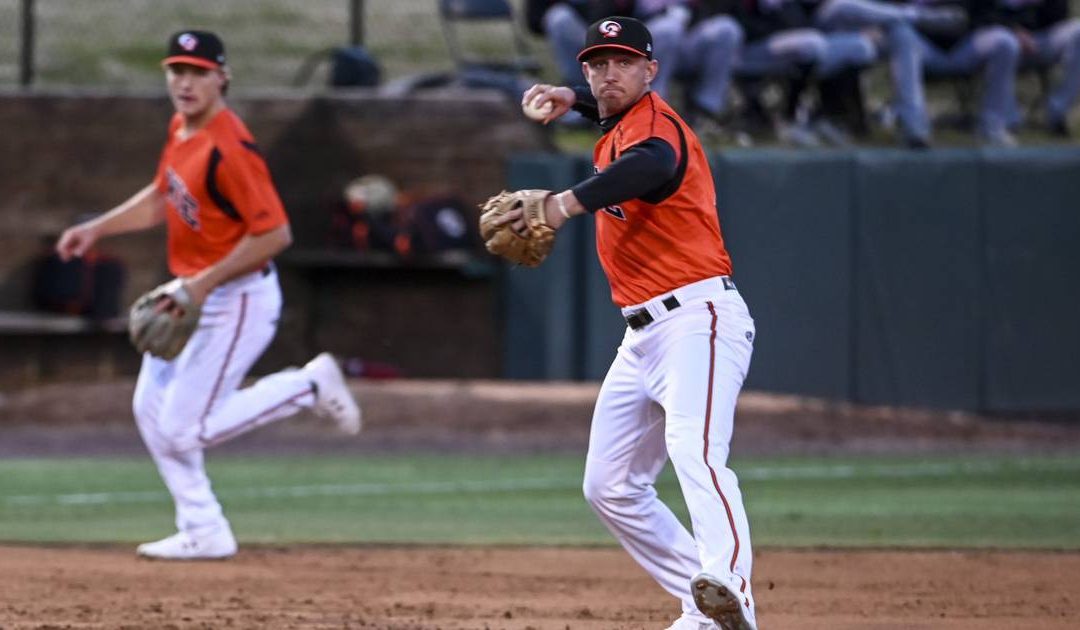 Just before players started packing up and heading down to Sarasota for spring camp, my co-hosts and I at On The Verge had the pleasure of sitting down with Bowie Baysox Fundamentals Coach Tim DeJohn, and other than quickly realizing that DeJohn is a hidden coaching gem in the Baltimore Orioles organization, I left the conversation thinking about two prospects in particular…Jordan Westburg and Gunnar Henderson.

When talking about this duo and their defensive abilities, DeJohn told us a story about taking Westburg and Henderson to the side during a winter camp and telling them that their job was to prevent the other from playing shortstop in the major leagues. Like many relationships we’ve learned about within the Orioles farm system, this didn’t create a “me vs. him” mentality between the two, but has only pushed both top prospects to become better each day.

“I think they care about each other and want the best for each other’s career” said DeJohn about the relationship between Westburg and Henderson.

Westburg, aka “Mr. Fundamental”, lived up to his self-proclaimed nickname while manning short and third last season across three different levels and has split his time almost evenly across the board at short, third, and second base this year while with Bowie and Norfolk. The question is where does he fit best in the majors and while I can’t answer that question, he’s going to end up where he’s supposed to and regardless of which position becomes his dominant position, Westburg will be an above-average defender for years to come and I wouldn’t be surprised to see him claim a Gold Glove or two.

As for Henderson, national writers have been pushing him off shortstop since he was drafted, largely thinking he would outgrow the position. Too tall to play short? I’m not buying it. It’s difficult to find another position player in the Orioles system who has improved their defense more. The biggest issue with Henderson wasn’t getting to balls, but the throwing errors. Those have been greatly cleaned up this year.

And some work from shortstop…

Without understanding how the organization evaluates defensive talent and what the future holds for players like Jorge Mateo and Ramon Urias, all I can say is that Jordan Westburg and Gunnar Henderson are doing everything they can to earn an everyday job at the major league level. While the defensive abilities are impressive, Orioles fans aren’t looking for Jose Iglesias, Freddy Galvis, or Jorge Mateo type players to hold down the middle of the field. How about some offense?

Providing offense hasn’t been much of an issue for this duo.

Westburg slashed .247/.344/.473 in 47 games with Bowie to begin the season and although his strikeout numbers did tick up a bit (27 percent), his walk rate exceeded 12 percent and we saw Westburg’s game power really emerge. Coming out of the draft, a common note on just about every scouting report on Westburg asked whether or not he would be able to tap into more of his raw power and if he could, his path to the majors becomes much more clear.

After hitting 15 home runs last season in 117 total games across three levels, Westburg hit nine home runs in 47 games at Bowie and is already up to four while playing in Triple-A, giving him 13 home runs, more than any other hitter in the Orioles minor league system. The picture is becoming more clear.

Westburg has now played in 12 games with the Norfolk Tides and is hitting .365 with a 1.169 OPS and is striking out at a career-low rate. That OPS and his 201 wRC+ obviously aren’t sustainable and we haven’t seen him walk at his normal pace yet, but 11 extra-base hits in 12 games is extremely impressive and the fact that Westburg has come out of the gates so hot against Triple-A pitching, it means he’s seeing the ball well against the most talented pitchers he’s faced in his career up to this point and feeling good.

Once again, while Westburg’s 2022 season has been impressive and put him on the doorsteps of OPACY, what Gunnar Henderson has done this season is truly eye-opening. I’ve already written about his tenure in Bowie a few times recently (more reading here and here!), but let’s talk about his time in Norfolk.

Still just 20 years old, Henderson is hitting .277 with a .453 OBP, three doubles, two home runs (one of those was on the second pitch he saw as a Triple-A hitter), and a 154 wRC+. Best of all, the uber-impressive K/BB numbers have moved up to AAA with him. As of this writing, Henderson has walked 15 times and struck out just 12 times, giving him 56 walks to 50 strikeouts on the season. He struck out 143 times last season. If anyone can find another prospect who has shown this level of plate discipline improvement over just one offseason, please let me know because his development in such a quick timespan and at such a young age is truly impressive.

We’re no longer talking about Henderson putting up big numbers in Delmarva or Aberdeen. It’s only been two weeks or so in Triple-A, but you couldn’t ask for a better start in the highest level of the minor leagues. The same goes for Westburg, who played an impressive third base in spring while with the major league club.

“After every session…he will come in and say, what do you got for me? He wants to hear things all the time. He wants to get better. He’s not one of those guys who just because he’s playing well, doesn’t want to hear constructive criticism.” said DeJohn about Westburg. As for Westburg the person, De John agreed with my thinking that Westburg could become a fan favorite in Baltimore in the pretty near future, even saying that “if I had a son, I’d want him to be just like Jordan Westburg.” As a father with a young son myself, that stood out the most to me. There’s no higher praise you could place on someone than that.

So when will we see this pair in the big leagues? Seeing as it’s still only June and they are playing as well as they are, finishing the season in Baltimore is certainly a real possibility. For Westburg, let’s make sure he can avoid the extended cold stretches he has found himself in a number of times before. For Henderson, just keep doing what he’s doing. As he starts facing teams a second or third time in Norfolk, can he adjust to their adjustments. The Orioles seem pretty adamant about making sure that once a prospect of Henderson or Westburg’s caliber gets called up, it’s for good. I know telling Orioles fans to be patient about prospects is pointless, but there are still a few more boxes for each of these two to check before they are fully ready. But let’s be honest, there aren’t many boxes and they aren’t that big.

“Never like to get out ahead of myself with guys that are still in the minors, but those two have a a very good chance of locking down our infield, I think for a while” said Mike Elias when recently talking about this pair of prospects and their early success with Norfolk.

They have moved up the organization together, even being promoted to Norfolk on the same day this year. Hopefully, both of the two friends get the call on the same day again, this time to pack their bags for Baltimore.

Will the Orioles infield consist of Adley Rutschman behind the plate, Ryan Mountcastle at first, Terrin Vavra at second, and a Gunnar Henderson/Jordan Westburg combo clamping down the left side by the end of the year? My money is on yes.