Chris Davis Has Been Tough To Watch; But I’m Still Riding With Crush 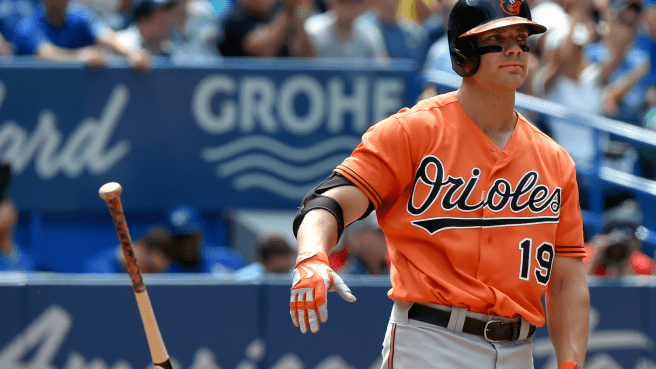 In the first 108 games Chris Davis has played since signing his 7 year, $161M extension; it’s largely been a struggle.

Even without factoring in the contract, the production isn’t good enough. More is needed from the 1st baseman over the O’s last 50 games of the regular season.

Those are obvious realities you can’t get away from.

If you weren’t in favor of the extension, you are looking at these struggles as confirmation of your fears.

Myself, I was in favor of locking him up. As such, I’ve found this stretch (and year overall as as a whole) tough to watch; but continue to believe in Davis’ abilities. I continue to believe Davis’s production during the duration of the contract will provide surplus value.

Davis is the rare player who can create a visceral reaction when he’s hot and when he’s cold.

The 1st baseman has been in an O’s uniform since the end of the 2011 season. Consistently we’ve seen Davis be a guy that when things are going well – locks in and destroys everything. Conversely he is also the guy that can’t hit a beach ball when he is cold.

Generally, I don’t care about strikeouts. That said, 154 in 392 ab’s is not acceptable. He is one of maybe three players in the game (Stanton, Harper) with true 80 power. As such, you hear the argument that he shouldn’t give up ab’s (in-terms of looking to leave the yard) in search of greater contact.

I don’t get the argument. He has immense power to all fields. There doesn’t need to be a focus of trying to homer. He will do that naturally by putting the bat on the ball more often.

When he’s cold, you see his head flailing about. Keep the head in, let the ball travel, find the ball. Why does someone with his power, need to be so fixated on pulling the ball? Take what you are given. If the pitcher wants to attack you outside, go with it.

With 3,500+ career ab’s at the ML league level, we can disregard his Minor League career – but I do find it interesting that he consistently hit for average (.318 MiL career average over 1,800 ab’s) at those lower professional levels.

We acknowledge that the Minors are not the Majors. Not only is the competition better, but there is the increased scouting and video, and opponents looking to expose the weaknesses you have. He likely never saw the over shift at the MiL level that he currently sees every ab in the Majors.

We should at-least be expecting a batting average in that range vs. his putrid current level.

It seems logical to me, that if he committed to going to left more often, he’d get more pitches to turn on.

It also seems logical to me that his recent hospital trip, and how he’s felt subsequently has impacted his play. He apparently lost some weight / strength, and apparently has dealt with bronchitis.

My thoughts there are that I respect him wanting to stay in the lineup, but if he hasn’t been ‘right’ – and that has been part of the profound issues over the last month – then a decision should have been made to DL Davis and get him healthy. Part of that responsibility is on the player, part of that is on the Coaching and Medical staff around him.

I’m generally of the opinion that when you have an extended body of work, that short-term samples eventually even out to career norms.

If things even out here in ’16 (and if he’s now getting past the bronchitis), we will now see an extended run of strong production to balance out the last 100+ ab’s.

Will things even out for Davis this year? I don’t know. I’d be lying at this point if I said I had no concern about him here in the immediate of this season.

As I said above, I do continue to believe Davis’s production during the duration of the contract will provide surplus value.

If the light never comes back on here in ’16, I’m still going to believe he has huge years left in him. (He better. The contract is signed. He’s not going anywhere.) The main difference is that we won’t be able to look at ’14 as mostly an aberration. He will have had a four year stretch (’13-’16) of huge swings. In that scenario, it would be difficult to guess what we might see from him in ’17.

Let’s hope the switch does go on for Davis down the stretch. It’s going to be a fight until the end for the Orioles to reach the playoffs* (and potentially hold off Toronto and Boston for the AL East title). If you reach the post-season, you want to advance. It’s another obvious statement to say that Davis’ production (be it positive or negative) will have significant impact either way.

(*Baltimore is making believers out of sports books. Bovada lists them as second choice to win the AL East at +175, ahead of the Red Sox (+200) and behind only the Blue Jays (+160). The Orioles are seen as the fifth most likely to win the AL pennant (+650) and seventh most likely to win the World Series (+1200). Have a look at who the Orioles play next, scan their entire schedule, find out the best betting lines for every Baltimore game and heed some tips on how to make more money from your Orioles bets.)

I think it’s clear that during the duration of the deal, we will see future lows and future highs from the 1st baseman. That’s who Davis is as a player.