Coal, Animal Noises & The Daily Wager All Rolled Into One 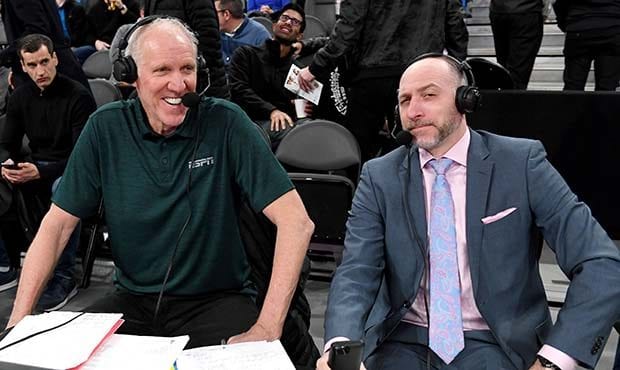 There’s no other television sports experience quite like the odd couple of Dave Pasch and Bill Walton on college basketball. Unless you tune in for a “just the facts” broadcast that provides zero humor and entertainment, this generates the start of a text chain with friends for whatever comes out of Walton’s mouth. They actively pretend they don’t care for one another (you can tell the very close relationship they’ve established), the humor in the telecast morphs from absurd to historical to a dry sherry and they don’t usually talk about the basketball game.

The basketball product isn’t the prettiest, but we aren’t tuning into the game for that anyway. The PAC-12 conference might get two teams into the NCAA Tournament (Walton predicts six with a straight face), but the ballgames usually end up close. On a recent Wednesday out of nowhere, these guys popped up on my television with a level of excitement that rivals the last day of school feeling. It’s complete euphoria. You know that TV magic will break out at any moment. To wit: Walton twice bit into a cupcake with a lit candle over the last two seasons – once with a zoom setup, once on site with Pasch flush with laughter.

With remote calls becoming the norm in the age of the pandemic, these guys make zoom calls fun. Who does that? Diehard fans know the phrase “Eugene from Eugene” represents a player named Eugene (from Canada) who plays for Oregon (located in Eugene). If a shot grazes the net -or worse – Walton will unleash “just missed” with droll delight. Nicknames for producers range from “Dr. No” to “Bob Seger.” Yet it’s not just frivolity on the menu. Both gentlemen are remarkably intelligent. Walton will break out of comedic timing to give us a lesson about mountains, rivers, books, politics or the origin of mushrooms that grow on trees.

The broadcast works with a combination of extensive research and outrageous ad-libs. Pasch sometimes creates a bingo card that you know gives college kids a reason to enjoy a beverage. Some observers to the most electric pairing in TV sports today might think Walton took a visit to the beverage cart or the pharmacy before the headset lands on his curly head. It’s an act. Absolutely no one who dabbles with alcohol or drugs can function at his extreme top shelf level. He just plays the role really well. Sometimes, the discussion turns serious. Walton once admitted suicidal thoughts on-air that followed a laundry list of painful back procedures. He’s repeated this story a number of times in other interviews, but you could pick up on his sincerity and struggle during the broadcast.

If Pasch disagrees with Walton, Bill automatically calls him “negative.” This works for when Dave points out if a team hasn’t scored in the last four minutes or a hot shooter who can’t find his touch. It’s probably the highest level of vocabulary of any sportscast. The pair seems so comfortable that they look to make the other break up – or at least smirk. To counter this, Walton sometimes make animal noises. Lots of them. He’s also big on billing a run-of-the-mill game as “the greatest night of our lives.” He thanks the most random people in life (living and dead) for his existence. You’ll either absolutely become smitten with it or despise the team. There is no middle ground.

After years of asserting Pasch wagers on sports, Walton became the number one fan of “Daily Wager” this year. ESPN’s betting show actually featured Walton on a recent episode where he said that he doesn’t know what the betting analysts discussed, but he can’t stop watching. Pasch can’t help by jumping on this at every opportunity and pointing out the contradiction.

Dave and Bill get it. Sports are fun. This isn’t an opinion show on a cable news channel. The ideal pairing of announcers boils down to two people you want to have a beer and just enjoy the company of the party. I’d jump at the chance to enjoy a cold one with these two because you never know where it leads.

Let’s get back to Dave for a minute. Not only does he flawlessly call a basketball game from his house, he keeps his head on a swivel to fire back the perfect comment in a window of about five seconds or less. Take any face of the network (Tirico, Nantz, Buck or Van Pelt) to respond to Walton without consistent laughter and shoot a witty retort. You can’t – with the possible exception of SVP. Pasch should actually host a late night talk show. Imagine how perfect he would fit in a format like Letterman made popular.

You haven’t missed out on your last opportunity to see them this season. The dream team will call three PAC-12 conference tournament games during championship week.

It’s the greatest night of our lives.

*Keep this in mind for Selection Sunday as it happens more often than not: Gonzaga can finish up its perfect regular season and conference championship with just two more wins. Then they have to wait six very long days to see if they’ll become the number one overall seed. The selection committee always says it looks at the entire season. Recent seeds prove that wrong. We’re all human. It’s a “what have you done for me lately” look. If Michigan or Illinois win the B1G, keep an eye to see if the Bulldogs became the number two overall seed.

*I’m not the guy to ask about filling out your bracket. The last time I selected the champion took place when Steve Lavin coached at UCLA. I will throw out this bit of wisdom. Take a double digit seed to make the final four. It’s a strange year where some teams only will play 16 games. The trick? Finding the double digit seed that makes it to the national semifinal.