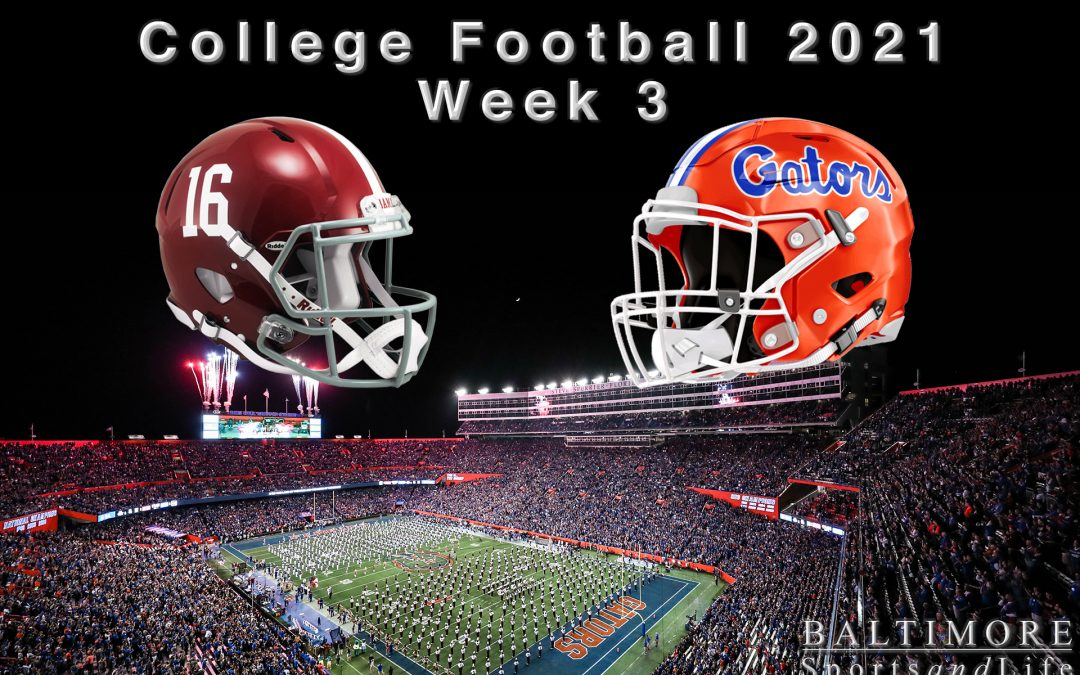 It was a crazy Week 2 of College Football, to say the least. Plenty of drama, unexpected results, a coach already fired, and everything from falling cats to stadium tunnel births. So let’s dive right into this week’s version of Overreaction and Recalibration.

Overreaction: Iowa is now the odds-on favorite to win the Big Ten.

Take nothing away from the Hawkeyes; they have had a terrific start to the season. You don’t beat the #17 and #9 teams in the country, both by double-digits no less, if you aren’t a very good team. But I think we need to take a deeper dive into how they’re winning before we declare them a legit Playoff contender.

In their 34-6 win against Indiana they had 303 yards of total offense. Not bad, but not eye-popping by any means. Their defense gave up just 233 yards, including 77 rushing yards on 31 attempts (2.5 ypc). That’s excellent, though given their offensive production it doesn’t explain the score disparity. Against Iowa State they were out-gained 2-to-1. On the season Iowa’s QB, Spencer Petras, is a very ho-hum 24-of-48 for 251 yards and 1 TD. The Hawkeyes have rushed for 250 yards at a somewhat pedestrian 4.0 ypc; and that’s without QB sacks factored in. They are 8-for-27 on 3rd downs this season.

Does any of that sound like it belongs to the #5 team in the country?

So how are they doing it? Look no further than turnovers. They are +5 in that department so far. More importantly, they have returned two INTs and one fumble for TDs. Again, take nothing away from them; good teams capitalize when opponents hurt themselves. But this is very unlikely to be sustainable all season. They still play Penn State, at Wisconsin, and (if they make it) the Big Ten East champ. However they do it, they are going to need to generate more offense, and the sooner the better.

Recalibration: Florida State is probably a 6 or 7 win team this season…it is apparent there is a level of energy around that program that hasn’t been seen since the Jameis Winston years.

If those words ring a bell, it’s because I wrote them only one week ago. Suffice to say that aged as quickly and poorly as a ripe avocado. Three days later I still cannot fathom what I saw Saturday night while just happening to tune-in to the final play of that FSU-Jacksonville State game.

To reset, with 6 seconds remaining, the ball on the JSU 41, and the Noles clinging to a 17-14 lead (inexplicable it was that close to begin with, but I digress) JSU QB Zerrick Cooper heaves a Hail Mary pass to WR Damond Philyaw-Johnson, who easily got behind his defender to catch it at the 20, cut left to elude an out-of-position safety, and casually waltzed into the end zone for a walk-off stunner. I’m not sure what shocked me more; Florida State’s defensive alignment that left no one within 30 yards of the goal line at the snap (which HC Mike Norvell later said he OK’d), or the apparent lack of urgency of the two FSU defenders that did manage to get within reach of Philyaw-Johnson to tackle him with the outcome so obviously depending on it.

Some other Week 1 odds and ends:

Clay Helton, who has seemingly lived on the hot seat for years, is out at USC following a debacle (to put it mildly) against Stanford. By all accounts I’ve heard, Helton is one of the nicest guys you’ll meet in college football. But even nice guys have to get results.

Which brings me to: College Football’s Greatest Underachiever; Florida State, Texas, or USC?

Two huge upset wins have glossed over how bad a start to the season the Pac-12 has had. Despite Oregon’s impressive showing in the Horseshoe, the conference was just 4-5 in OOC action. And I already mentioned USC doing the most USC thing since…USC last did it. But getting a team in the Playoff tends to change the narrative for a weak overall conference. Just ask the ACC (thank you, Clemson!). The Pac-12 might finally have a decent shot at it this season. Though they might want to just put Oregon and UCLA in bubble wrap right now until December, and then let them play for the conference title.

What a great start to the season for BYU. Over the course of 8 days they beat two Pac-12 teams, including the end of a 9-game losing streak to rival Utah, and finally got membership into the Power 5 Club. The Cougars had long-hoped to join the Pac whenever the conference explored expansion in the past, and while they are no doubt happy to join the Big 12 instead, make no mistake; beating a couple Pac-12 teams carries some extra satisfaction. By the way, their opponent this weekend: #19 Arizona State.

Some more on this weekend.

A rematch of the SEC Championship Game, the only real challenge Alabama faced in 2020 on its way to an undefeated title season. Both teams come into this game looking very different personnel-wise from last season. And while they have not needed to show very much so far, the eye test suggests neither has sustained significant drop-off.

As is usually the case in games with a 2+ TD spread, how good the game ends up being comes down to the underdog, so that’s why I address Florida the most. There was one other time where Florida HC Dan Mullen had Nick Saban on the ropes, but came up just short, and that was 2017 when he was at Mississippi State. Unlike last year’s pass-happy Gator offense, I think Mullen will need an approach similar to 2017 to have a chance. His QB that year, Nick Fitzgerald, was much more of a running QB than a passer, just like both Emory Jones and Anthony Richardson now. MSU kept that game tight by moving the ball on 1st and 2nd Down, avoiding obvious passing situations. The Gators have the personnel to do the same, and must avoid obvious passing situations against Alabama’s defense.

On the other side of the ball it’s no secret what the Gators have to do; get a lot of pressure on QB Bryce Young with 4 rushers. Young has yet to face adversity in his nascent college career, so if Florida can really get after him, combined with what will certainly be a jacked-up atmosphere in the Swamp, it might disrupt the uber-efficient Tide offense and ensure we see a ballgame. Finally, to have a chance the Gators must improve on their current turnover margin; -1 so far this season.

So my pick? I like Alabama to win, but I believe the Gators cover.

Not really a blizzard, just Penn State’s annual full stadium White-Out game. But you know what’s more rare than a blizzard in September? An SEC team playing north of the Mason-Dixon line. That already makes this game one for the ages.

I was not high on Auburn headed into the season, and wasn’t swayed by their smackdowns of Akron and Alabama State. They can prove a lot to me if they manage to keep this a game in the 4th Qtr.

That’s said, I’m not all-in on Penn State as the new Big Ten favorite yet either. As impressive as coming out of Madison with a win was for them, they will need to get more out of their running attack, and the bend-don’t-break defense might eventually wear down and….break. They need to get off the field sooner.

Still, at home…in front of a jacked-up crowd, College GameDay in town. Take the Nittany Lions +6.

What Could Have Been?

This game lost some luster after the Hoosiers’ ugly showing at Iowa in Week 1. And that’s bad news for the Bearcats, who need wins over ranked opponents if they are to break through the G5 glass ceiling and get in the Playoff.

Looking ahead, more bad news for UC is that their next opponent, Notre Dame, has looked anything but impressive in their first two games against inferior opponents, despite winning.

Looking even further ahead, there is good news for the Bearcats….come 2023 they’ll be in the Big 12. And with Texas gone that conference’s reputation will surely get a boost. (I kid, I kid…maybe).

But back to this game. I actually like Indiana, even straight up, and definitely +3.5.

Maybe living on the West Coast I’ve become too conditioned to the Pac-12 getting trashed, but these two games have the scent of disaster. I’d take the underdog ATS in both, and frankly I’m at all not confident either ASU or UCLA come out of this weekend still unbeaten.

For my fellow Terps fans, don’t forget it’s a Friday night game this week. Which is good, since it leaves more viewing time for some good games on Saturday.